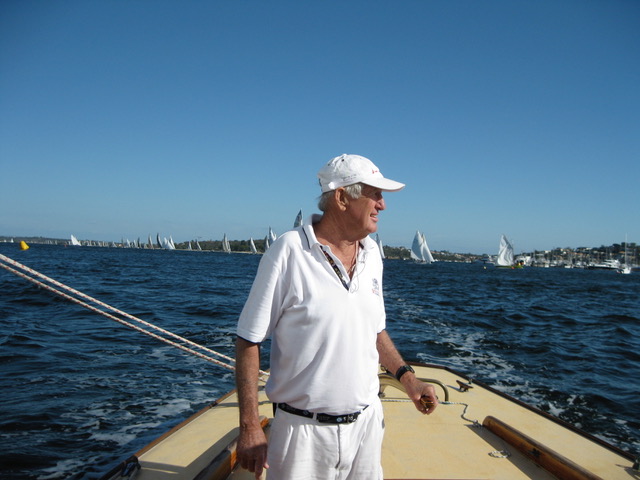 Bill Steele at the helm of “Thera”

The Western Australian and Etchells communities were saddened to hear of the death of Bill Steele on Saturday, November 23, 2019. Bill, who was planning his 80th birthday celebrations for next February, suffered a brain aneurysm while at the helm of his Etchells Chelsea Lady and died two days later.

Another skipper, Doug Kerr, was just to leeward and, noticing Bill's boat had stopped, went alongside and called the rescue RIB with crew Skip Lissiman and Rob Rooke who quickly got him aboard and raced into a waiting Ambulance at the Royal Perth YC Annexe. He was kept on life support for a couple of days, but the damage to his brain was complete.

The human brain is an amazing thing, and Bill’s allowed him to do a great many things, from representing Hong Kong in the Flying Dutchmen class at the 1972 Munich Olympics to being a successful navigator in Sydney Hobarts and China Sea races before electronic navigation simplified the life of a navigator.
Flying was a large part of his life. Firstly with the RAAF, then the RFDS in WA, followed by flying DC3’ into short mountain-top strips in rain shrouded PNG, followed by a life with Cathay Pacific, later flying 747’s on the first non-stop trans Pacific flights. He flew the last Convair into Saigon as the NVA advanced down the road to the airport (didn’t stop the engines while they loaded the people on).
In later years his passion was sailing Etchells. An important part of his year was the annual Etchells Worlds held in various parts of the world. Bill made a major contribution to the world administration as a world Governor of the Class.
Bill supported the young guys in the Elite sailing programme in a mutually beneficial arrangement where he paid them to crew with him. The crew with him on Saturday was Sam Gilmour on main, Lucas Cunningham, and Brad Moore on jib.
Bill’s final memories will be sailing  Chelsea Lady last Saturday afternoon in the ocean off Freo in the Syd Corser Etchells Regatta in a lovely breeze, at the forefront of the fleet.
Bill will be sadly missed by the WA sailing community, but all can take heart from the fact that he died doing what he loved.