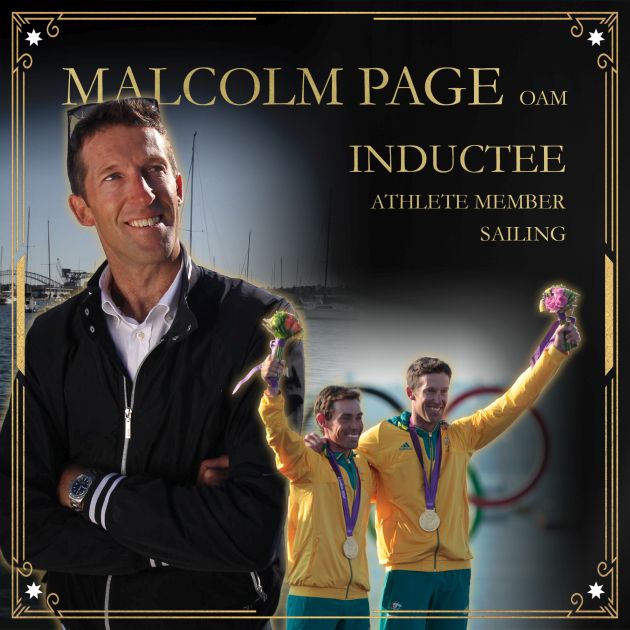 The Victorian Institute of Sport (VIS) and Australian Sailing (AS) are delighted to announce the appointment of Malcolm Page OAM as the Head Coach of the VIS Sailing Program.

When Page retired his sailing career in 2012 he finished as the most successful Australian sailor of all time with two Olympic gold medals. Page has the best record of any sailor ever in the 470 class and represented Australia at three Olympic Games; 2004 Athens, 2008 Beijing and 2012 London.

The only Australian to defend his gold medal title at the 2012 London Olympics, Page was awarded the honour of carrying the Australian flag at the closing ceremony.

Growing up in the Sydney Harbour, Page won his first title at only 13 at the Manly Juniors Nationals and his first Australian Championship when he was still a teenager in the Flying 11s. Page’s sailing experience is extensive, having also sailed in Farr 40, Sydney 38 and 18ft Skiffs. He represented Australia in over 30 World Championships and was 13 times Australian National Champion.

Page narrowly missed selection for the 2000 Sydney Olympics but the next decade saw him dominate the 470 class. In 36 international events he took out an incredible 25 gold medals from 2001-2009. Adding also four silver and two bronze medals to his tally.

His first Olympic gold came at the Beijing 2008 Olympic Games with sailing partner Nathan Wilmot. Before his second gold medal in London 2012, Page had already become the most decorated 470 Men’s sailor of all time. At the time, he and his sailing partner Belcher were also ranked first in the world by the International Sailing Federation.

The successful partnerships with Wilmot and Belcher also resulted in Page taking home ten 470 Australian Men’s Championships between 2002 and 2012.

Following his remarkable sailing career Page has focussed on raising the profile of the sport and has accomplished fantastic results off the water as well. His career at World Sailing started when he was elected Chair of the World Sailing (ISAF) Athletes Commission. He identified there was a need to rethink how sailing was presented in the media and his initiative lead him to the appointment as ‘Head of Media’.

In this role, Page built communication plans around World Sailing events and drove a new philosophy around live sports presentation. With his team they tested how to present the sport better and honed these skills leading into the 2016 Rio Olympics.

Over the past three years Page has worked for US Sailing as Chief of Olympic Sailing. His main objective was to bring the USA back to being a dominant youth and Olympic nation by designing and implementing a high performance plan.

The results from Page’s work has already shown in the youth ranks where the young American sailors has reached several podium finishes over the last couple of years. At US Sailing, Page also assisted in finding sources of funding outside of Olympic competition funding and implemented systems to increase financial stability.

Page is excited to be back in Australia and says it was the right move for him and his family; “Getting involved with the VIS and with the sport that I love is the perfect re-introduction to Australia,” adding “Victoria has always been instrumental in sport as well as the world sailing scene.”

The VIS’ focus on a healthy environment for athletes was one of the many things that attracted Page to the role; “I’m looking forward to being involved in a successful sporting environment, which emphasises the athletes’ balance between sport and life”.

VIS Performance Manager (Podium) Bill Tait is thrilled about Page’s appointment and the leadership he will bring to the VIS Sailing Program; “After an extensive international search we are excited to have Malcolm aboard as our Sailing Head Coach.”
“Malcolm's credentials as a sailor, coach and program leader are first class, but perhaps more importantly he brings calm and methodical philosophy to developing talented sailors”.

Daniel Belcher, President AS is also delighted to have Malcolm Page back in Australia and take up the role of VIS Head Coach through until October 2020; “Mal is an inspiring figure in the Australian Sailing community and brings a wealth of knowledge and experience to the role.

“As one of our key State Sailing Performance Program Partnerships, the VIS and Australian Sailing look forward to strengthening the development of Youth and Olympic Sailing in Victoria, and supporting upcoming sailors to achieve success.”

Page will be responsible for of the VIS Sailing Program and leading the overall Victorian Performance Pathway for Sailing, working alongside AS Head of State Sailing (VIC) Carrie Smith. He will commence in the role from today’s date Monday 25 November 2019.