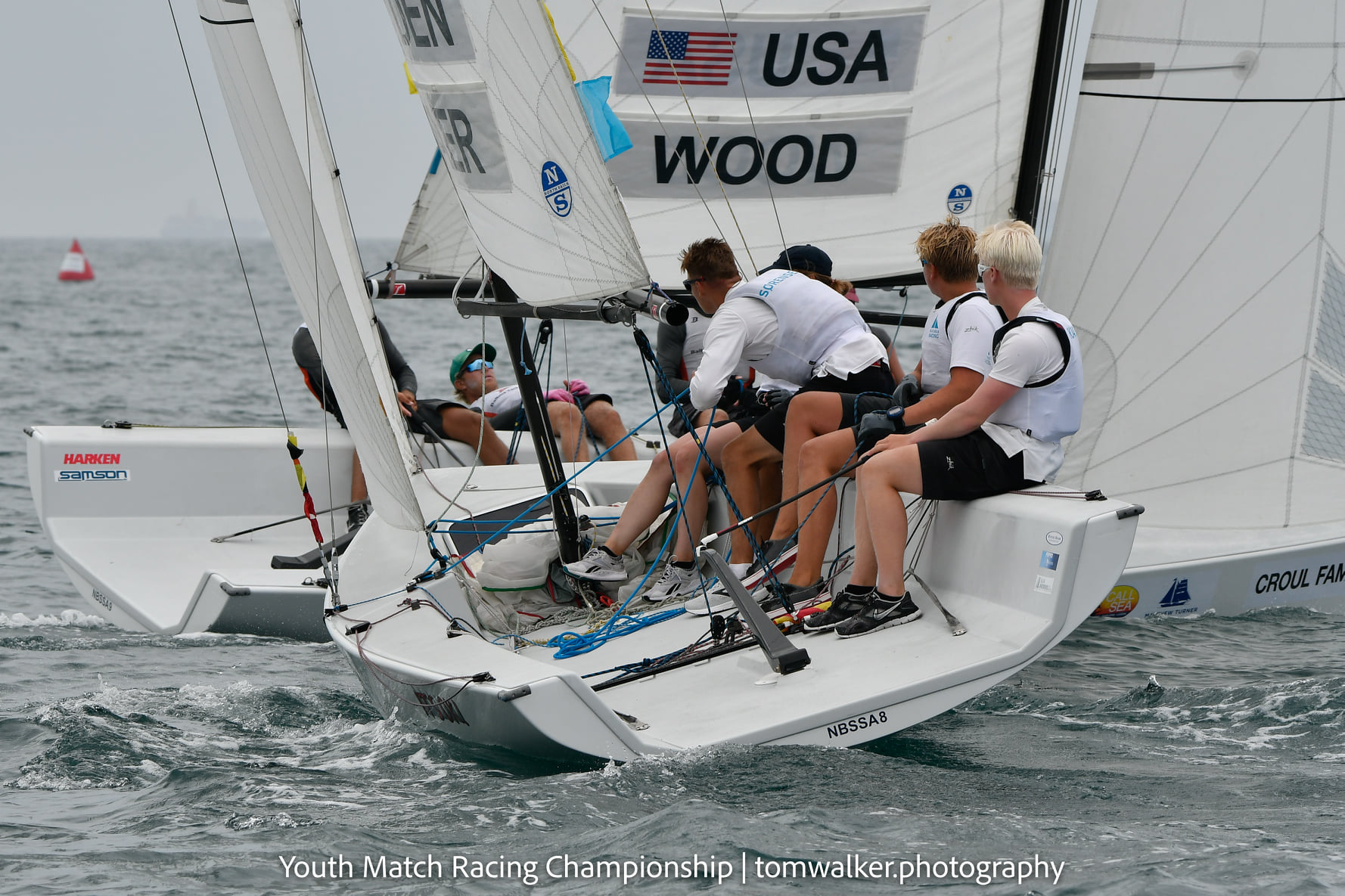 On the second day of the Youth Match Racing World Championship at Balboa Yacht Club, California, there was little change as the two favourites continued to dominate the double round robin stage of the event.

Emil Kjær (DEN, Royal Danish YC), the runner up to Petersen in the just-completed Governor’s Cup International Youth Match Racing Championship, maintained his second position in the Worlds at the end of today. Earlier in the day, Kjaer was looking to pick up a point on Petersen due to Petersen’s loss. However, in a minor upset in the next race, the Dane lost to Italian Riccardo Sepe (ITA, FIV).

Kjær commented on his race with Sepe, saying, “We had control of him with about 40 seconds before the start, but lost control and the favoured right side of the course to the Italian. That pretty much cost us the race.”

When asked why he was so aggressive at the start with a seemingly less successful (so far) opponent, Kjaer said, “It looks like we will make the semis so we are trying some things we can use in that stage.”

The other three semi-finalists will be the top three finishers in a third, “repechage” round robin among the other eight boats. While points from the first two round robin will carry over into the seven-race repechage, several boats could win any of the three top spots and thereby get to the Semi-finals.

After Wood beat Petersen, it looked like the former U.S. Youth Match Racing Champion was on a roll. At the start of Wood’s next match against Kjær, he won the start and was still ahead two legs later but took starboard downwind end of the “gate” which led him out to the upwind left side of the course on Leg 3.

The wind had shifted significantly to the right, and the end of gate he chose was also farther away from the windward mark. Those two factors led to Kjær winning the “first cross” on Leg 4. Although the finish was close, Wood could not make up the distance downwind and as a result has fallen back into the pack on points.

Nonetheless, both Wood and Sepe lead that “pack” behind Petersen and Kjaer and have an apparent advantage over the other teams for advancing into the semis. Sepe has 9 points and Wood 8.

Petersen also commented post-race that, “Today was one of the toughest days of sailing in my life. Tricky sailing, breeze on then little wind, and the usual chop. We were just trying to adapt instantly to those conditions as they changed, and it was tough!” Evidently not too tough for the leader and presumptive first semi-finalist.

The World Championship is hosted by Balboa Yacht Club. The presenting sponsor is BYC member Jack Croul and his family, supporters of youth match racing for decades. The “Youth Worlds” continues through Saturday when the Semi-finals will be completed and then the Finals take place.

Live coverage of the racing Friday and Saturday starts at 1130. Post-race press conferences will air live Friday at 18:30 and Saturday at 1630, followed by the Medal Ceremony.

For the full results, see: https://www.matchracingresults.com/2021/youth-world-championships/