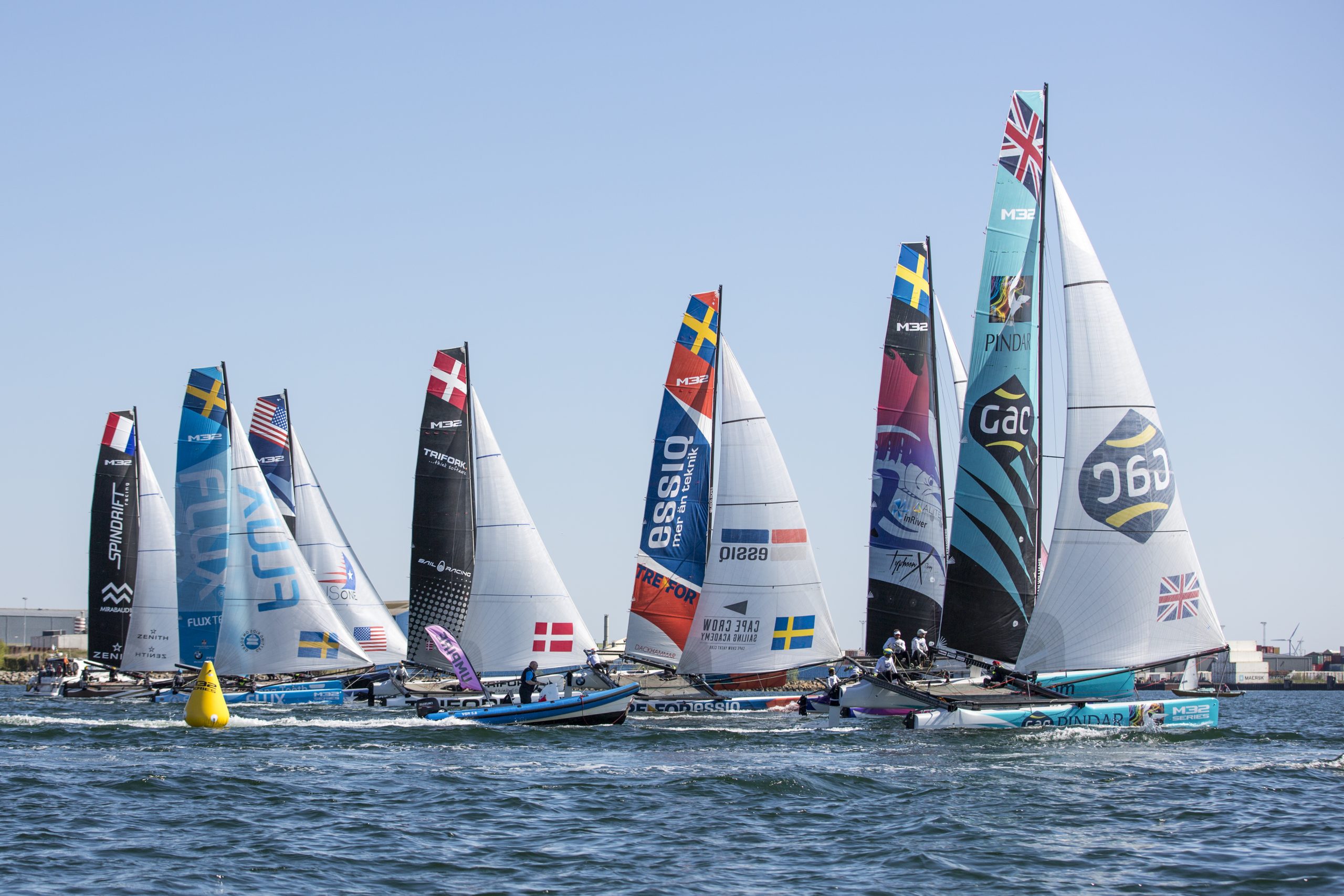 Defending champion, Taylor Canfield and his US One team stamped their authority on the M32 Scandinavian Series, decisively winning the season’s opening event in Copenhagen today.

The Danish capital laid on July-like conditions for the three day competition, with racing held on Tuborg Havn, just off the clubhouse of the Kongelig Dansk Yachtklub (Royal Danish Yacht Club), the event’s hosts.

Today, under brilliant sunshine, the breeze filled in from the southeast and built to 12 knots, more than adequate to get the lightweight speed machines flying their hulls. Once again there was a strong turn-out ashore by Danish fans keen to witness the spectacle, the near capsizes and the tight finishes between the seven international teams.

A further seven races were held today, bringing the total number sailed up to 22. It was day for pairs of wins: Leading French multihull sailor Yann Guichard opened up, claimed the first two with his Spindrift racing team. Then it was the turn of the regatta’s overall winner Taylor Canfield and US One, before local hero Jes Gram-Hansen on Trifork found an unbeatable final gear, claiming the three last races, including the double points-scoring finale.

“I think the sailing in Copenhagen has been absolutely fantastic,” enthused Gram-Hansen. “We’ve had fabulous conditions each of the days and we are happy with our performance. We are not quite able to challenge US One, but I think we sailed a really solid series and the last three races were really good.

“You have to take your hat off to US One. They are sailing fantastically and have really found something that none of the other teams have.”

US One’s victory in Copenhagen proves that Taylor Canfield’s team remains the dominant force in M32 fleet racing. With unsurpassed mastery of both the course, the shifty wind and manoeuvring, the team also experienced close shaves, including when a large gust struck the fleet on a reaching leg. In this they narrowly avoided Johnie Berntsson’s FLUX Team who was tight to leeward of them. But the US One also showed great consistency.

“It was a great win for the team,” said Canfield. “Obviously it was a little bit disappointing at times, but all-in-all we were getting better which was our goal. It is nice to finish with a 27 point lead.”

Today the wind was once again out of the southeast on Tuborg Havn and extremely gusty. “One second you were ripping along doing really well and the next you were nearly flipping over,” Canfield continued. “You just needed to have your head out of the boat and to get everyone on the same page about what was coming next, trying to sail smooth and to stay away from the others.”

As to the competition compared to 2015, Canfield says it is a lot higher: “People have been putting the time in on the boats and some catamaran guys have come in and are pushing hard, but that is only pushing us to get better.”

A final mention must be made of Måns Holmberg, the 19-year-old son of Swedish match racing legend and America’s Cup helmsman, Magnus. This was only his second regatta and his first time fleet racing it. And yet he came close to winning today’s third race.

“It has been so much fun,” said Holmberg. “We led a lot of races, but we are pretty new in the boats compared to the others. The first downwinds are crazy – we came within half a metre of crashing into FLUX Team today.”

This young sailor has earned himself great respect throughout the class this week and hopes to compete in the remainder of the M32 Scandinavian Series, which resumes in Gothenberg, Sweden over 16-18th June.