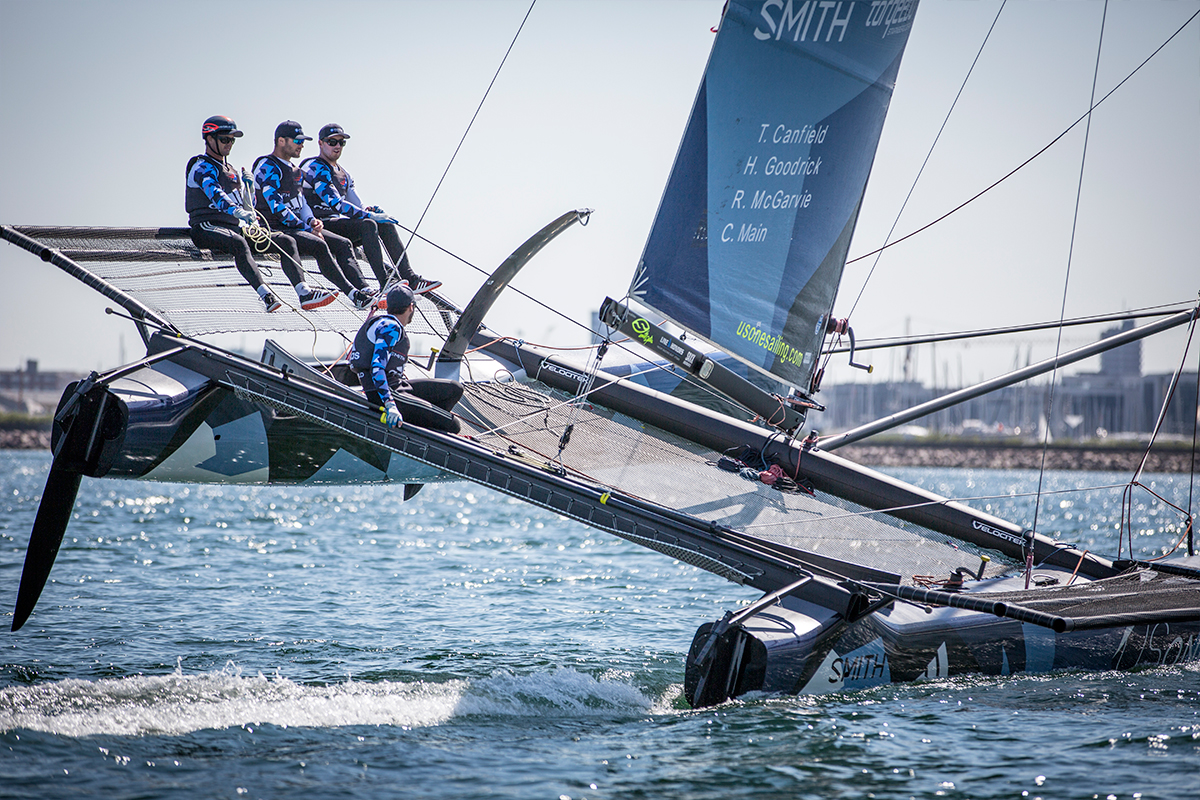 Considering there was snow on the ground here a fortnight ago, Copenhagen laid on its best sailing conditions for day two of the M32 Scandinavian Series off Tuborg Havn.

Spectators and competitors alike enjoyed the high adrenalin thrill provided by the nimble Swedish catamarans hitting 20 knot speeds in gusty winds that peaked at 18 knots. With this came the tightest of reaching mark roundings, moments of precarious hull flying, four different winners over today’s eight races and a near top speed collision that drew gasps from the crowd assembled off  the Kongelig Dansk Yachtklub (Royal Danish Yacht Club).

Once again it was US Virgin Islander Taylor Canfield and his US One team that ultimately won the day, despite coming within a whisker of a maximum speed head-on collision with Ian Williams’ GAC Pindar.

As Canfield described it: “We came around the leeward mark in first and they were barrelling along upwind on starboard. For a while I thought we were going to go bows-in together, but we both turned in a split second – luckily – in opposite directions.” There was minor contact as the two boats touched racks, but otherwise both were unscathed thanks to the speedy reaction of their helmsmen.

Leader for most of today was French Olympic and round the world sailor Yann Guichard and his young crew on Spindrift racing. The team, which Guichard co-manages with Dona Bertarelli, won today’s second and fifth races but were later let down by some deeper results.

“It was a very good day, better than yesterday – our team work was very good.” said Guichard. “Today it was challenging to get a good layline, especially downwind with the shifts.” Guichard felt that their sail set-up was better suited to today’s slightly stronger conditions and there were moments when they showed impressive pace, picking off places as they screaming along the shoreline.

“It was really tight, especially at the first reaching mark. You push to the limit, the boat and the team, but we like that game. We improved our skills, especially me on the helm,” admitted Guichard.

The local Danish crews also put in a better performance with Jes Gram-Hansen and Rasmus Køstner’s Trifork Racing coming second today with the young blades on the Nicolai Sehested-steered Essiq Racing Team just a point behind in third, but lying second overall after two days of racing.

“It was fantastic conditions – we couldn’t ask for more,” said Gram-Hansen. “It was a great race course with lots of opportunities and the racing was super close.”

Team Trifork was starting well and frequently leading, but never managed to translate this into a race win. Gram-Hansen attributed this to his new crew and reacquainting themselves with the M32. “We have been struggling a little with just getting our system working on board. Today you had to make some really quick decisions and we didn’t get it right a couple of times, but otherwise we were very satisfied with the day.”

In a couple of races, local fans were treated to seeing the two Danish teams neck and neck, but Sehested claims there is no real rivalry – they have all sailed together previously. His Essiq Racing Team won race six today and Sehested reckoned that they were continuously improving. “We made a lot of mistakes, especially early on, before we got settled. It is the first time with this team that we’ve raced in the breeze.”

The young Danes have been on the steepest of learning curves, so to be lying second overall and improving so quickly is something about which they should be extremely proud.

The final day of competition tomorrow will see racing take place over 1400-1700 CET.