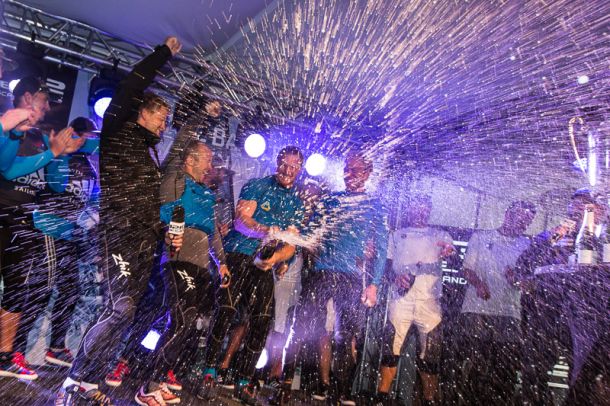 The crew of US ONE celebrates in Stockholm. Photo © Sander van der Borch.

15/09/2015
With their warship-style camouflage and the skipper’s constant aggression on the race course, American/US Virgin Islander Taylor Canfield was never going to be happy with anything but a win in the 2015 M32 Scandinavian Series, so last winter, he trained – and trained hard. Along with main trimmer and BMW/Oracle America’s Cup alum Hayden Goodrick and match racing specialists Ricky McGarvie and Garth Ellingham, US-One learned the intricacies of their thoroughbred racing catamaran over a few weeks in Miami, and clearly, they picked up something no one else in the world had. And until yesterday, no one fond a way to get it – the American-born islander had never been beated in a M32 regatta.
But in Sunday's double-points final round, Canfield met his match, with former America’s Cup sailor and two-time Swedish Olympic Tornado representative Martin Strandberg (Alite Racing) taking two of the three finals matches to close out the season with a win, and a surprise 3rd place for the overall series. “This result is something really special after such a long and hard season,” said Strandberg. “My crew worked so hard all the time, and to be rewarded with the win here in Sweden feels amazing.”
A scheduling conflict meant US-One downwind specialist Garth Ellingham was back in America this week, with match racer and former Team Vestas Wind crew Nicolai Sehested filling in aboard the boat that’s won almost half of all races in the 2015 series. “We definitely missed Garth, but Nicolai is a real pro and he slotted in nicely,” said Canfield, who credits the entire fleet with stepping up their game for the final event. “These guys are all phenomenal sailors, and of course they caught up. Now it’s time to up our game for next year,” said the new champion.
Mattias Rahm’s battles with Martin Strandberg for the backup helm spot on the Victory Challenge America’s Cup team were memorable, and their battles in the M32 this week were every bit as fierce – at twice the speed. Despite Alite Racing’s strong final performance, it was Rahm Racing who held on to second overall for the season, by virtue of their consistent performance across the range of conditions over the five-city tour.  Rahm – the winner of the 2013 Scandinavian Series trophy – said he and his crew had rarely enjoyed sailing more. “The competition, the conditions, the crowds – this was really special, and we want to thank Stockholm for putting on such a great show,” he said.
Extra training and hard work saw the veteran multihull crew aboard Trifork looking extremely quick all week, but the overnight leaders couldn’t hang on to their earlier form in the double-points finale. “All we needed was one decent finish today and we were on the podium in our first season,”said frustrated co-skipper Rasmus Köstner, who was quick to point out that he had the time of his life in the 2015 season. “This is some of the most enjoyable racing I could ever imagine,” said the Dane.
Canfield now becomes the odds-on favorite to win the reinvigorated 2016 World Match Racing Tour Championship, and a historic grand prize of $1 Million dollars, but the young double world champion didn’t think the Tour’s new move away from monohulls and into the M32 cat meant it would be an easy task for his team. “Everyone saw how quickly these guys wore down our advantages this season, and there will be some more big dogs coming to hunt for that huge prize next year,” said Canfield. “We’re always ready, but there’s plenty we need to do to get better over the winter.”