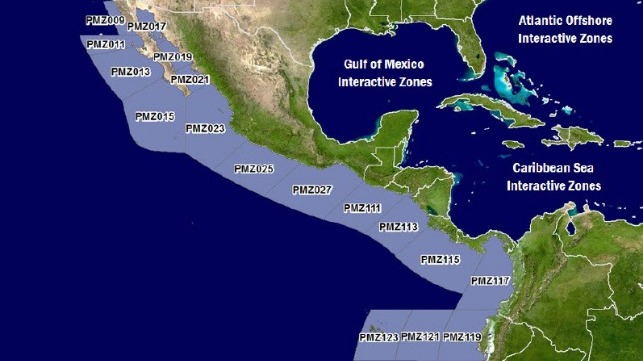 Ten eastern Pacific coastal marine zones will cover the area within 250 nautical miles (nm) of Mexico, with seven marine zones covering the area within 250nm of Central America and Colombia, and within 750nm of Ecuador to include the offshore Galapagos Islands. TAFB meteorologists will provide five-day forecasts that will include 10-meter winds, significant wave heights, primary swell direction, dominant wave period and significant weather. The information will be in both text (Pacific coast of Mexico and Pacific coast of Central America, Colombia, and Ecuador) and interactive map formats.

The eastern North Pacific Ocean is one of the most vulnerable areas to tropical storms, hurricanes and other dangerous marine weather. Such improvements should, hopefully, promote better decision making by ship captains and crew in hurricane-prone waters to avoid marine disasters, says TAFB.

Mariners in this area include pleasure craft traversing from the US west coast south along the Baja California peninsula and up through the Gulf of California, as well as commercial vessels traveling to and from the Panama Canal.