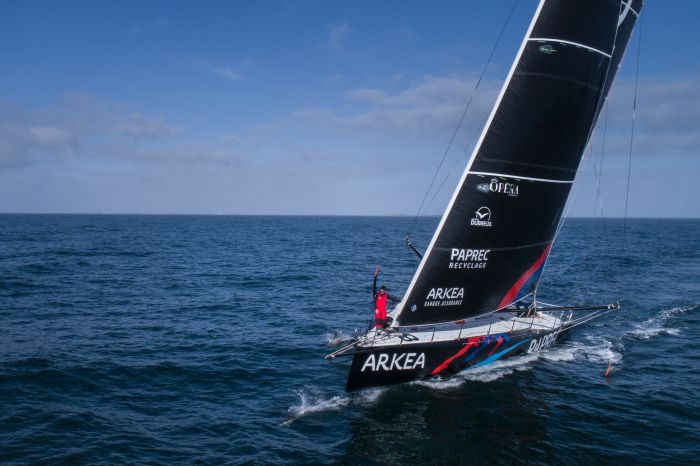 After hurtling along at warp speed for 24 hours, propelled by a steady NW’ly wind, the leading boats in the Bermudes 1000 Race Douarnenez – Brest have, as expected, seen their progress falter as of early this afternoon. The reasoning behind this is that the leaders of the fleet are currently negotiating a transition phase. This is taking the form of a sluggish header, which is forcing the skippers to reposition themselves along the route, but with it come some uncertainties. As a result, it’s hard to know exactly how long each of them will be slowed for.

For now, the latest estimates suggest that the first skipper, Sébastien Simon, will likely cross the finish line in Brest between 5:00 and 8:00 hours French time tomorrow morning. He should have a four to five-hour lead over the trio made up of Boris Herrmann (Malizia), Yannick Bestaven (Maître Coq) and Sam Davies (Initiatives Cœur) whose order of arrival is drumming up great suspense!

“Since the Azores, it’s been like a conveyor belt. The weather has been fabulous and the sea is pretty well ordered. Right now, I’m sailing at 90° to the wind, on a reach with 25 knots of breeze. It’s fantastic!” commented Clément Giraud (Envol by Fortil).

Positioned in 7th place some 175 miles shy of the leader, the skipper from Toulon in southern France is still making the most of the fine conditions to make headway up to Brest this Thursday afternoon.

Meantime, the leaders have begun to stumble in a light patch. Heading the fleet, Sébastien Simon was the first to fall into its clutches at around 13:30 hours, his speed plummeting from 20 to 5 knots, and the wind heading him. Right now, the sailor from Les Sables d’Olonne is close-hauled waiting to latch onto a N’ly wind, which he should be the first to hook up with again and then make for the finish line, which lies between the semaphore of Saint-Mathieu and that of Toulinguet located at the entrance to the Brest narrows.

“For now, it’s hard to gauge how long this transition will last and at what point the new breeze will make its presence felt once more. We’ll see the leaders bunch up again and then get further apart since all the lead boats are likely to be affected by this tricky zone,” announces Jacques Caraës, Race Director of this Bermudes 1000 Race, the latter having some reservations about the ETAs announced (see below), which might naturally slide a little.

The one related to Sébastien Simon could reasonably be situated between 5:00 and 8:00 hours tomorrow, and those of his closest pursuers may fluctuate between 9:00 and 11:00 hours. One thing for sure, though, is that the final match between Boris Herrmann (Malizia), Yannick Bestaven (Maître Coq) and Sam Davies (Initiatives Cœur) promises to be formidable. Indeed, this trio is grouped within less than three miles of one another, which is nothing, especially given the weather context. Up for grabs are the second and third spots on the podium no less!

The battle for the certificates of merit is also likely to be thrilling right to the last, especially so for 7th, 8th, 9th and 10th places, which should be split between Clément Giraud (Envol by Fortil), Stéphane Le Diraison (Time for Oceans), Arnaud Boissières (La Mie Câline – Artipôle) and Fabrice Amedeo, who are bunched tightly together in terms of distance to the goal, albeit on very different trajectories.

The skipper of Newrest – Art & Fenêtres, who is about forty miles further North than his three rivals, is today benefiting from a bit more pressure, as well as a better angle of progression, so he might well shake up the current hierarchy. “Since scaling my mast yesterday, I’ve been able to extract myself from the windless zone now that I have use of my large headsails again (gennaker and code zero). I’m currently on a reach, a point of sail the boat absolutely loves. I reckon I’m still in with a chance of things working out with the group ahead,” commented the skipper – journalist, who has been running some optimistic routing.

Still becalmed for the latecomers

Further towards the tail end of the fleet, Manuel Cousin (Groupe Setin), Damien Seguin (Groupe APICIL), Miranda Merron (Campagne de France) and Alexia Barrier (4myPlanet), have also really got a shift on since this morning. This has come as a great relief, as the British sailor explained in a message sent this morning: “Yesterday was spent trapped in the forecast windless bubble. I think I've escaped now, at least I hope so. Hours of going nowhere fast with the sails slatting violently in the swell. The little breeze there was kept shifting every time I turned my back to do something else.”

Trailing the peloton, Pip Hare (Superbigou), Ari Huusela (Ariel II) and Belgian sailor Denis Van Weynbergh (Eyesea), who rounded the Azores waypoint this morning at around 3:00 hours and is now making for Brest too, are still having a rough time of it. In fact, all three are having to contend with a very light wind, which fortunately is set to fill in over the course of the evening as it shifts round to the NW. This should enable them to lengthen their stride too and complete the 2,000-mile course of this Bermudes 1000 Race Douarnenez – Brest on Monday.