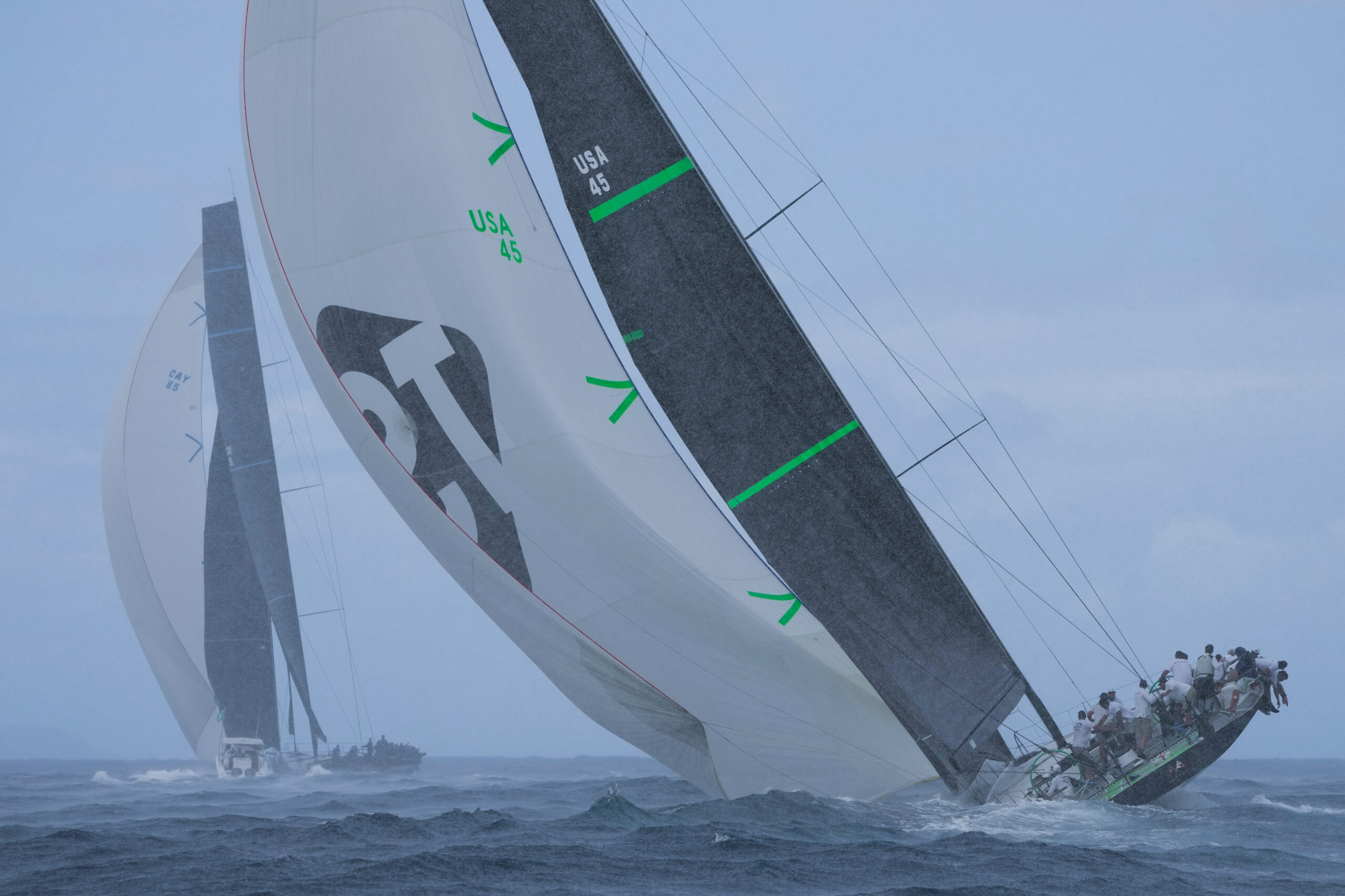 There was a change in complexion with the maxis and multihulls sailing a 35-mile course around the eastern/windward side of St Barts, followed by a long downwind east, before retracing their steps back to Gustavia.

Meanwhile, the other classes, including the remaining maxis in the CSA3 class, for the first time sailed two races, the 12 mile long first finishing off St Jean on the north side of St Barts, from where the longer 18 mile second started.

Compared to the beginning of the week, the wind was still easterly, but lighter, dropping to 10 knots, although occasional cells passed through bringing significant shifts, a building of the wind and a deluge.

As those following Rambler 88 rounded the St Jean mark, Bella Mente (under kite) impressively rolled Vesper (under jib) to leeward, but within minutes a cell closed in causing Bella Mente’s kite to blow up spectacularly.

Splitting from Bella Mente and heading offshore, Vesper managed to lead around the leeward turning mark, a few boat lengths ahead, before yet another match race with Bella Mente commenced.

“We got away from them when we got to the back side of the island [St Barts], but then we concertinaed up, carrying the old breeze back around the island,” Slater continued.

For the first time at this event Wendy Schmidt’s Botin Partners 85 Deep Blue scored the maxi class bullet in what proved the closest race results to date. This ended the perfect scoreline of Jim Swartz’s Vesper, which finished second, just 12 seconds astern under IRC corrected time. The newest boat in the fleet, this was only Deep Blue’s second ever race win.

“There was a little bit less breeze and we were going better against Rambler 88 – plus we changed a few set-up things which helped: We were able to sheet the main on harder,” explained Rob MacMillan, Deep Blue’s tactician and project manager.

“We have been working on our downwind modes and that seemed to pay dividends. It is still a huge sea state: it was not full planing conditions, it was more VMG downwind today…”

Deep Blue got away more cleanly in the squall at St Jean compared to those astern and the crew was able to carry their kite for longer to the bottom of the course.

“We put the majority of our distance on them there. Sometimes the wind gods smile on you,” continued Macmillan. “Wendy is super happy. She did a spectacular job driving upwind and downwind. Like all of us, she loves coming to this island and racing maxis here.”

Invited guest on board Deep Blue today was IMA President Benoît de Froidmont. “Benoît was our lucky charm – he can come any day of the week!” commented Macmillan. Going into the final day of racing tomorrow, Deep Blue’s goal is simply to try and beat George David’s Rambler 88.

While victory went to Deep Blue today, up until the final stage, the race had been finally one that appeared to be going Rambler 88’s way. “I thought today was our day,” mused tactician Brad Butterworth.

“It was going well for us right up until the end. The big shifts were good for us on the long run down to the bottom of the course – we rounded there in very good shape and the beat went well for us,” Butterworth said.

“We had got quite a big lead at the top of the island, but we couldn’t carry the breeze to the finish, which is what put us back in the fleet again. There were all these cells coming through, so it was quite difficult… But you can’t complain – it was great sailing.”

Among the rest of the maxis in CSA 3, there was upset too. While Jim Madden’s Stark Raving Mad VII continued her perfect scoreline by winning the first race to St Jean, this stopped in today’s second, won by the Swan 58 OMII.

In this the competition between Stark Raving Mad VII and Italian Luigi Sala’s Vismara 62 Yoru remained intense, especially coming into the second finish where the latter came home just three seconds ahead under IRC.

“We liked the day a lot because conditions were quite favourable to us: There was less wind and it is a bit harder for us to handle the big conditions because they have more stability,” Sala said. “It was a lot of fun in both races, especially the second when there was a lot of downwind. And the guys were brilliant…”

In the second they had spent the last miles locked in a match race with Stark Raving Mad VII, aided by the match racing skill of their young tactician Ettore Botticini.

While Sala acknowledges, it is too late to make any impression on the results, their goal for the final day of racing is to go home with one CSA 3 race win in their pocket.