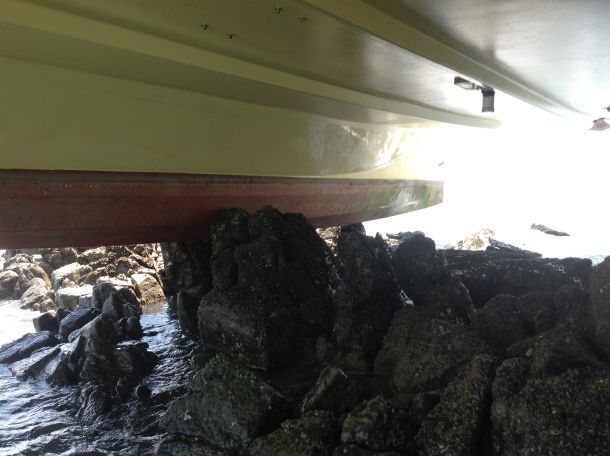 The cat on the rocks - when the tide went out. Photo supplied by owner.

A few weeks ago we ran the story (see Related Content) of the cruising catamaran that hit rocks near Phuket. Thanks to Bob Mott of www.chartercatamaran.com and Gren Fordham of www.southeastasiapilot.com we now have an update and it sounds as though the rocks were on the chart.

“The latest info is that the cat was almost certainly anchored in the location marked ‘K’ and probably hit the rock northwest of the anchorage. This rock is also marked on Navionics charts. The original information about motoring northwest for 1 ½ hours at 4-5 knots would have put them in a completely different location (see below) so I guess disorientation played a part in the ‘uncharted rock’ story.

Meanwhile the cat's owners, Andre Beaulieu aged 71 and wife Hazel aged 68 have moved into the old CBS Boatyards office and shifted the household aircon off their cat to that office. So they are confortable cooped up with a double bed and aircon and a balcony with seating at the moment only 50 metres from their cat.

Bob Mott reports that they have showers and toilets nearby – 'a bit primitive but fine if you’re a liveaboard yachty' and the mood is pretty non-stress for the pair of them. 'Take it as it comes. Not in a rush.'

Bob also reports that Pantaenius (their insurance company) is getting Anthony Gates, the local surveyor, to get quotes on the repairs.

It appears that this is a cruising story that will end well.