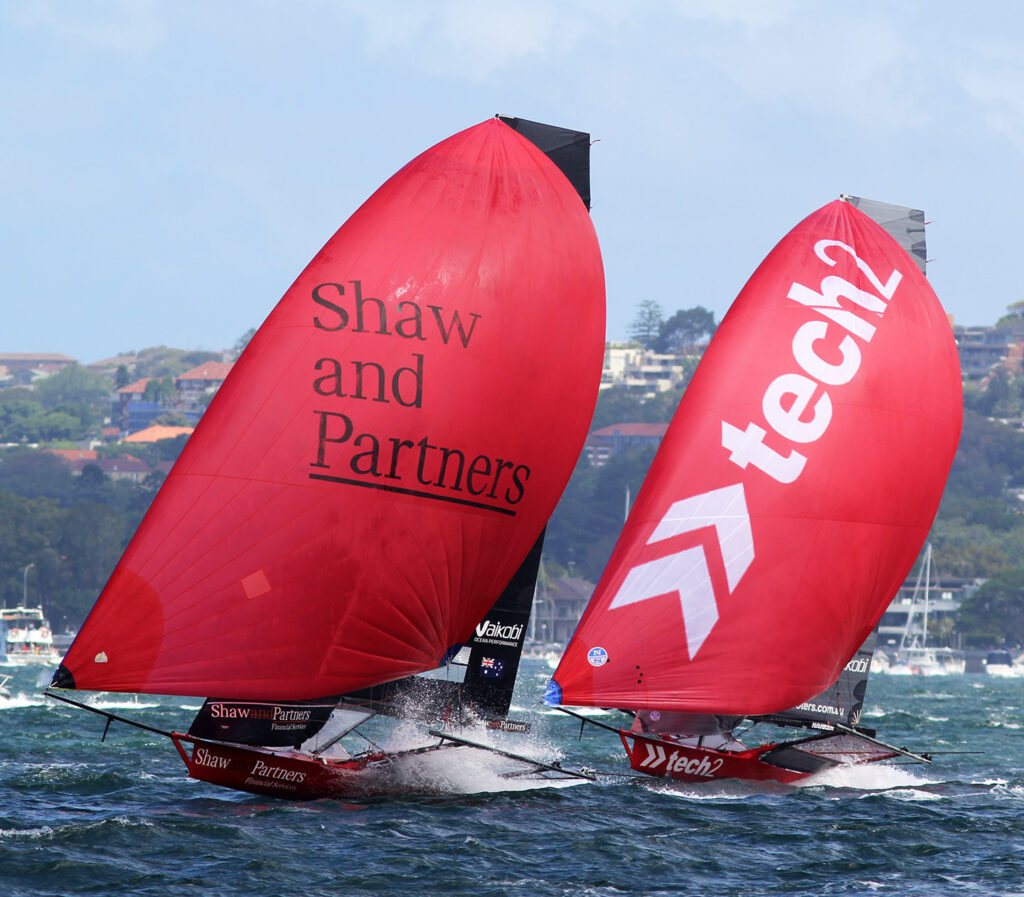 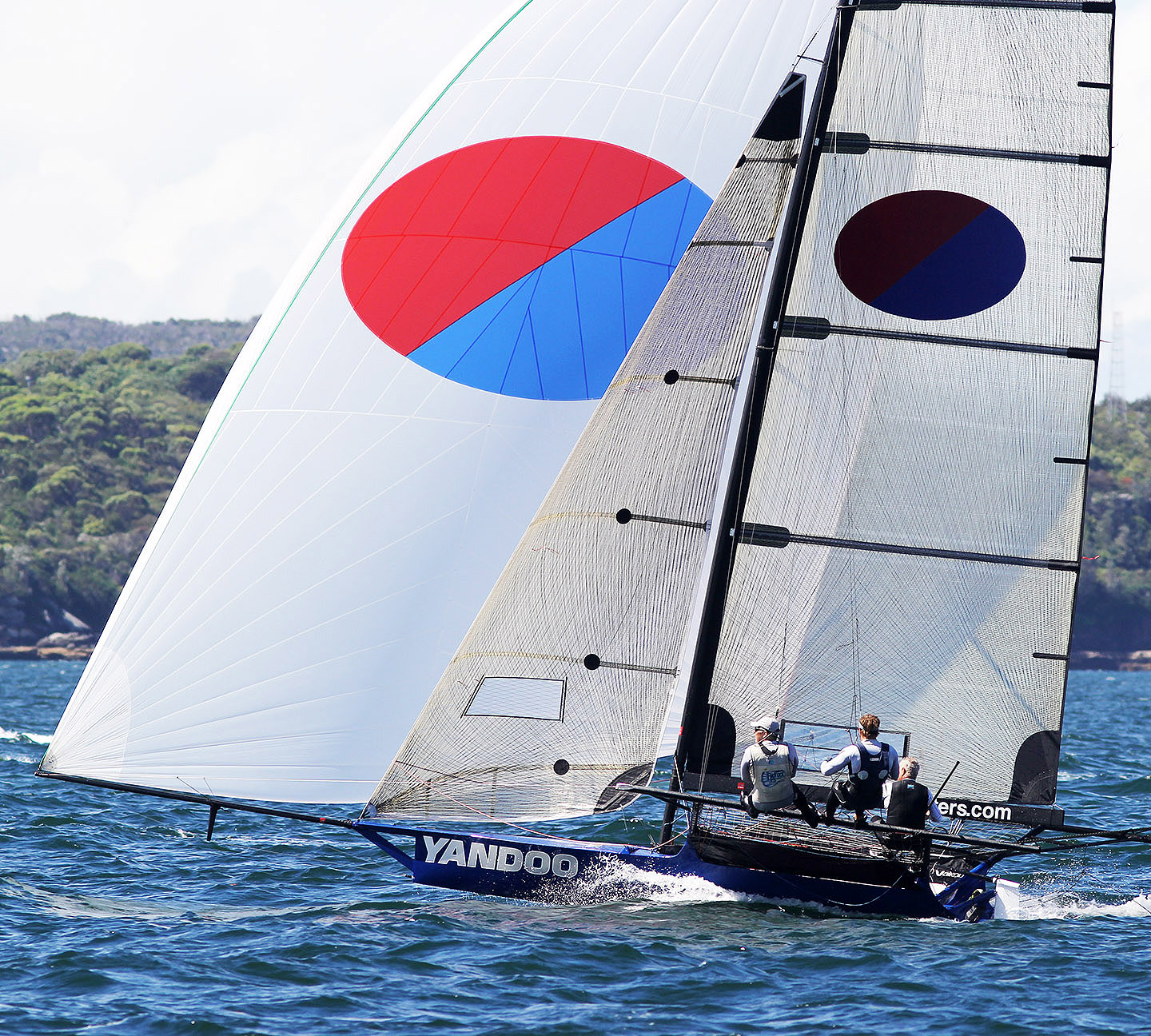 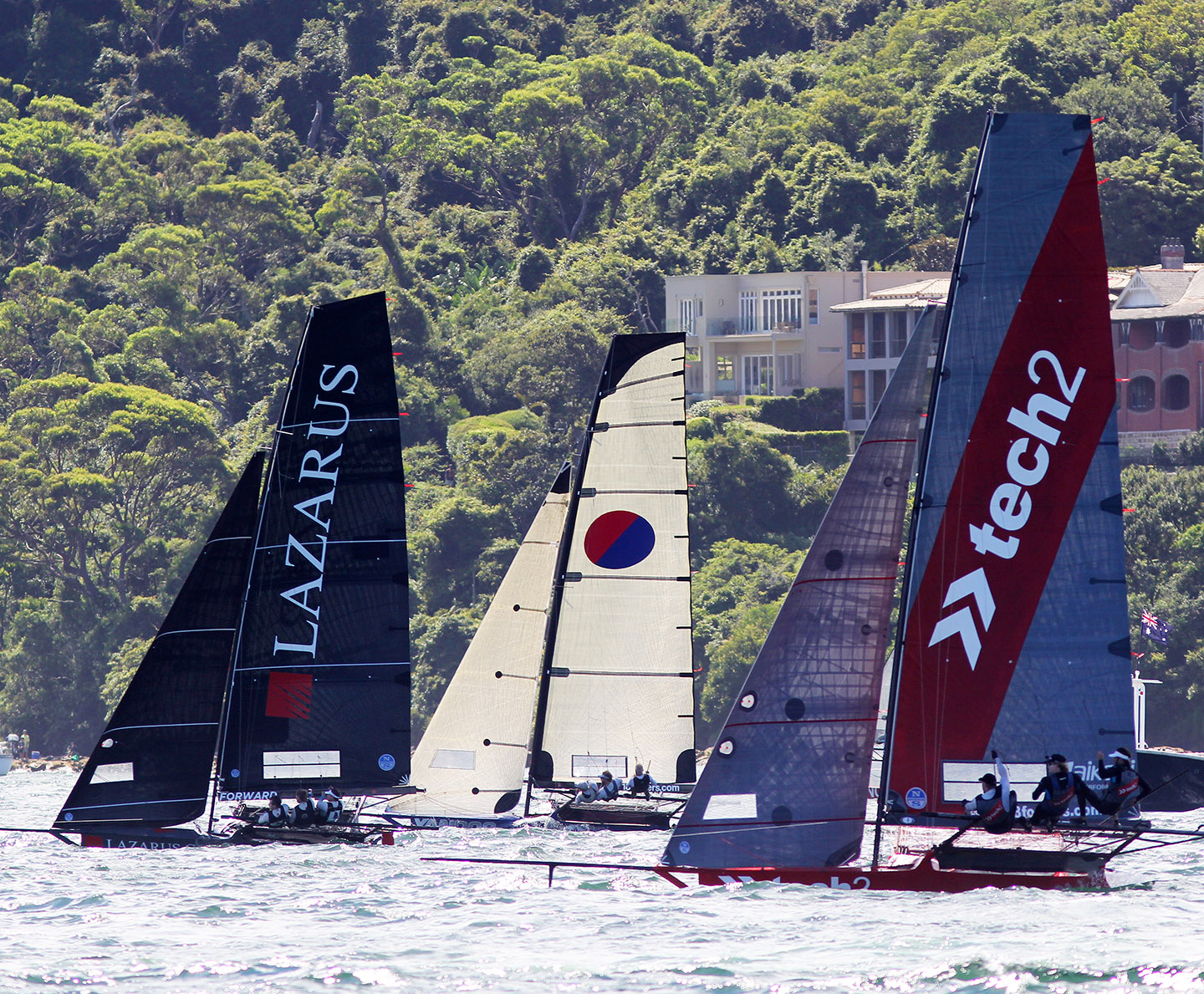 Tight racing at the head of the fleet in Race 7. Pic - 18ft skiffs 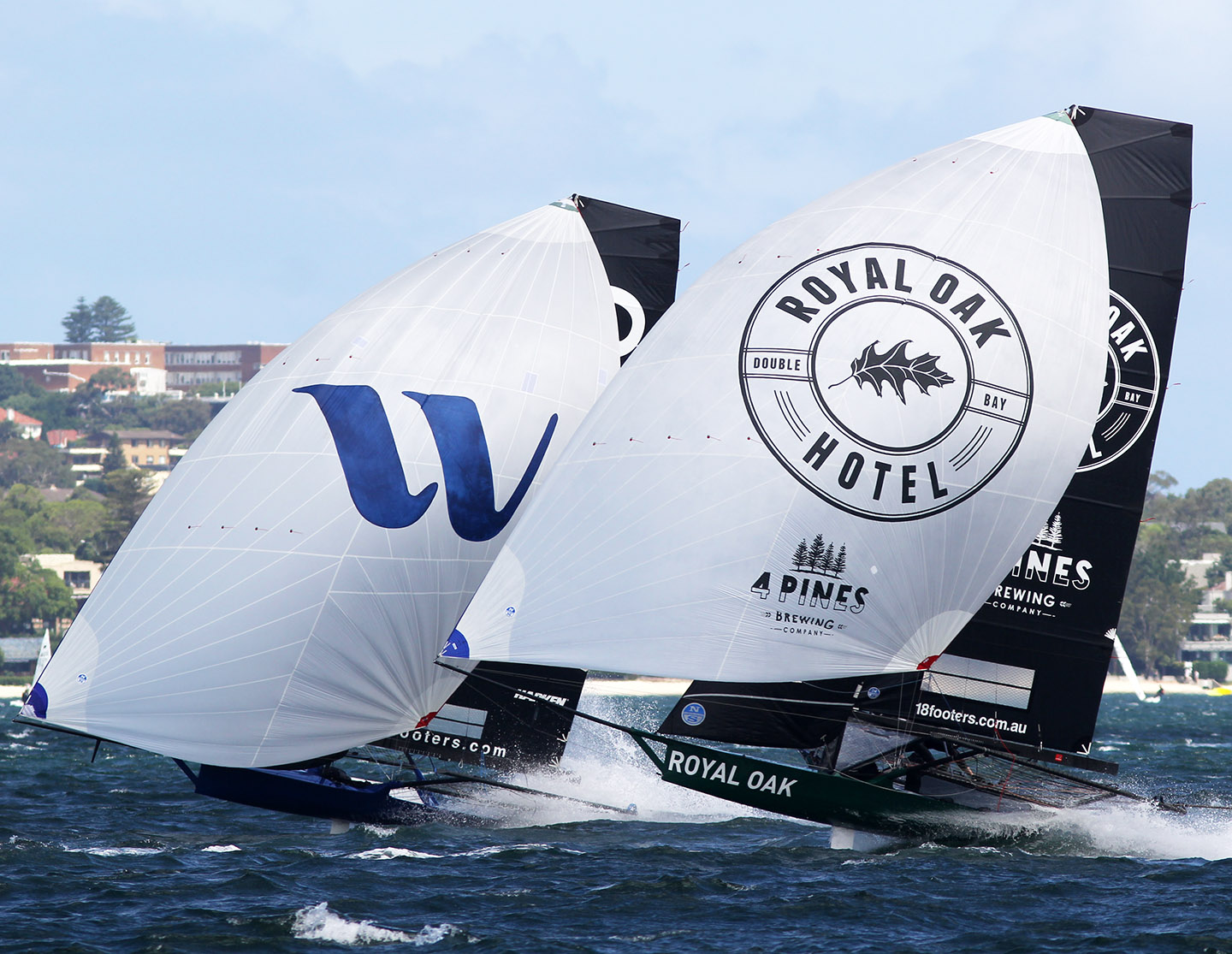 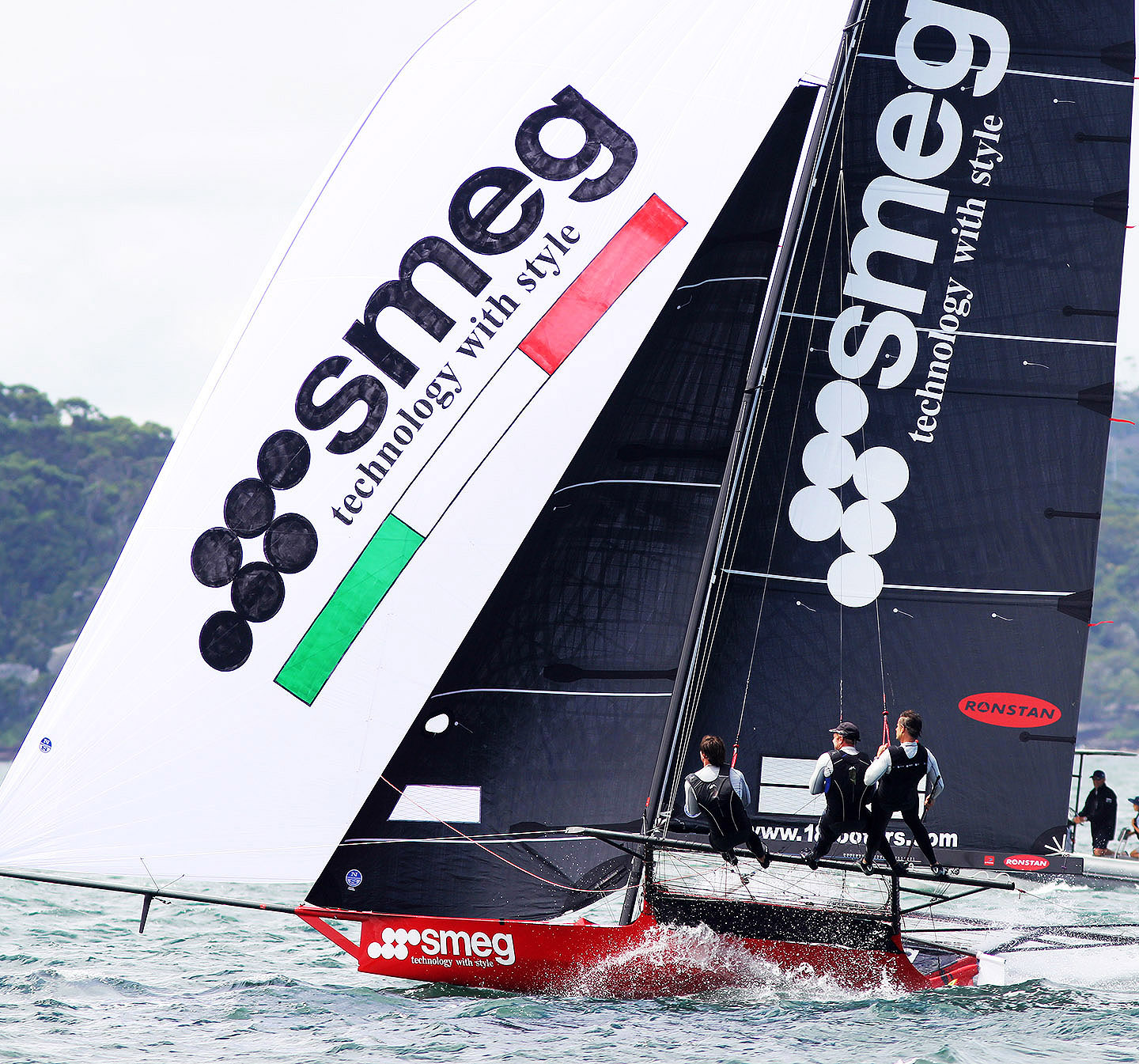 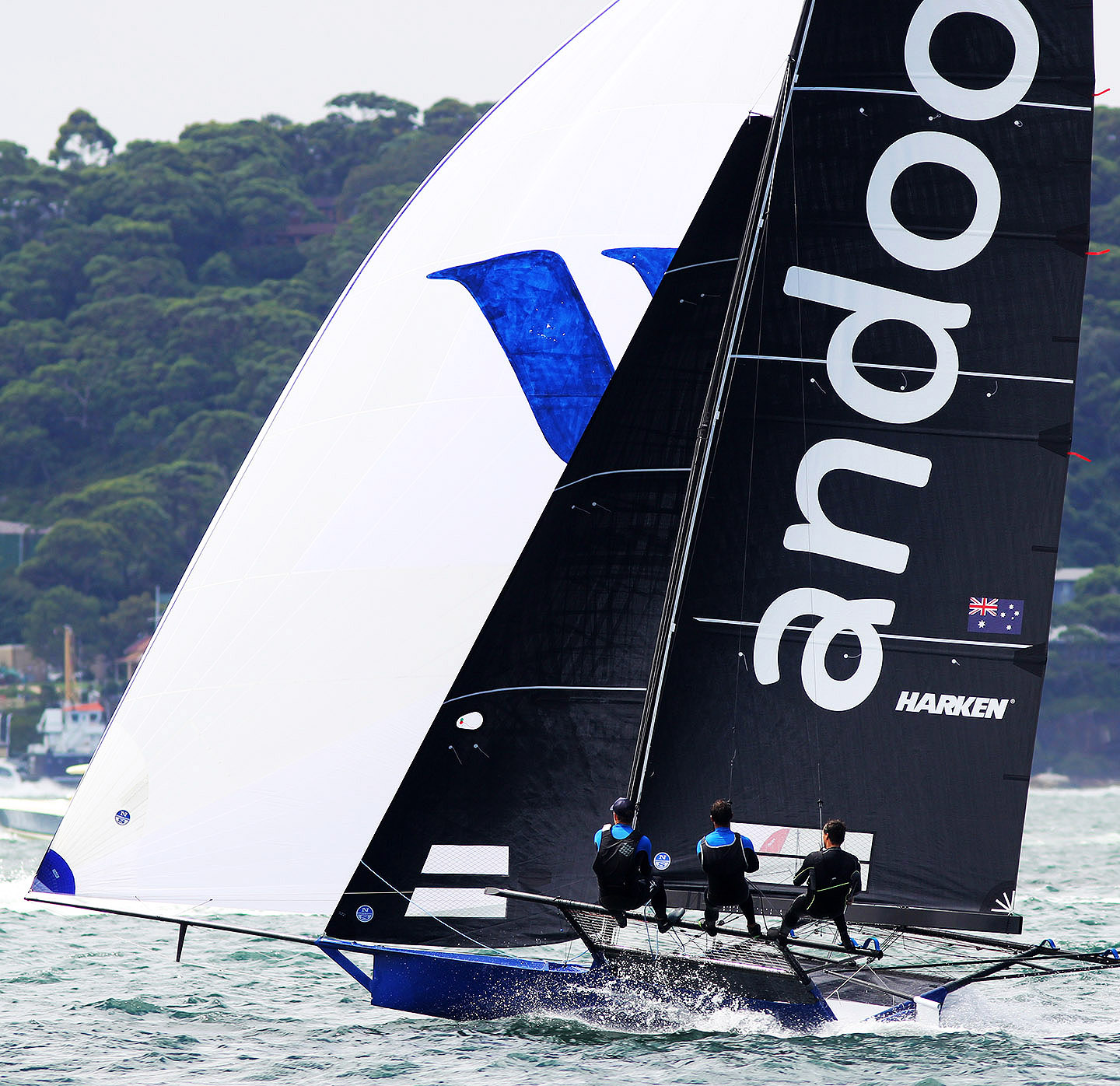 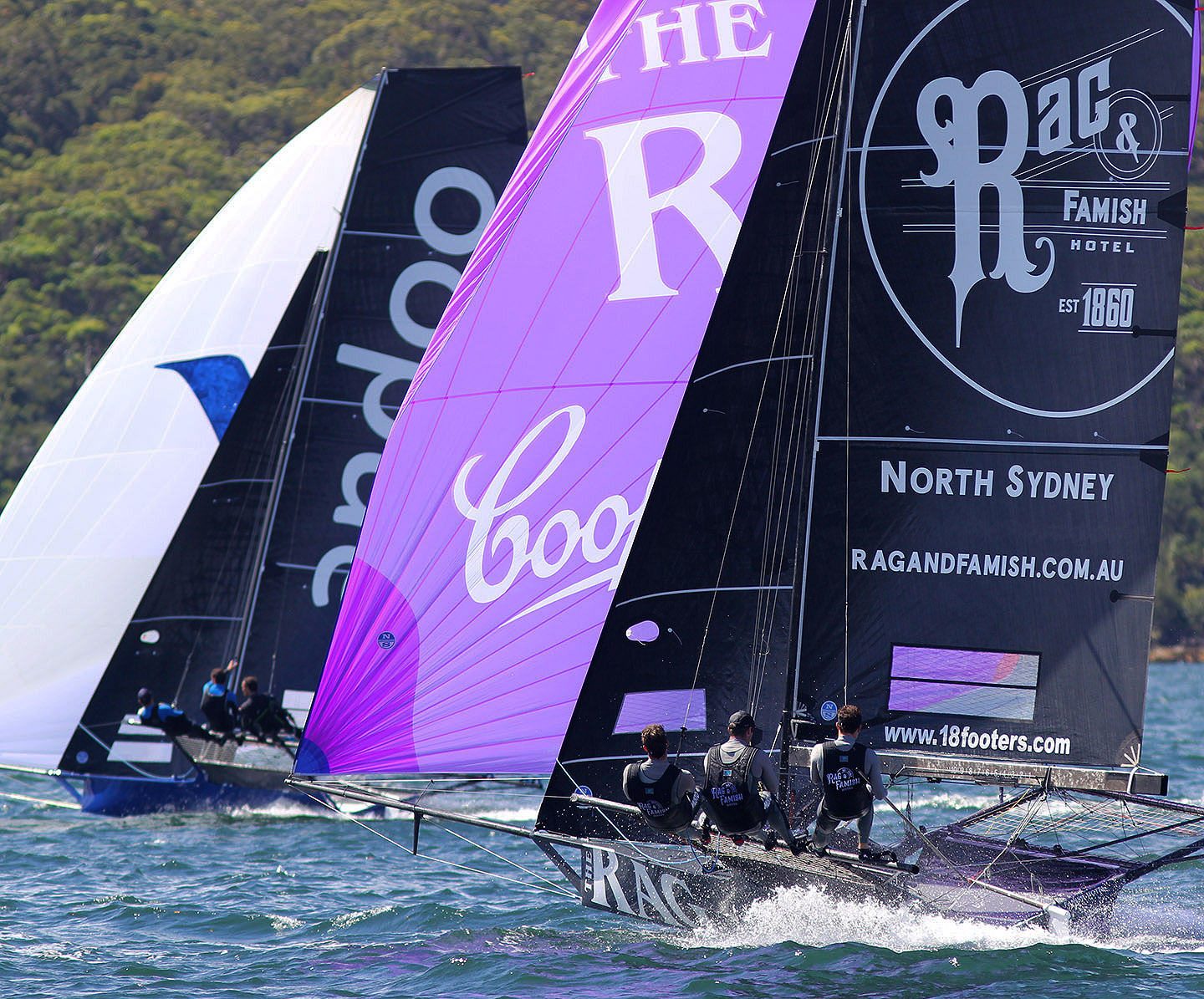 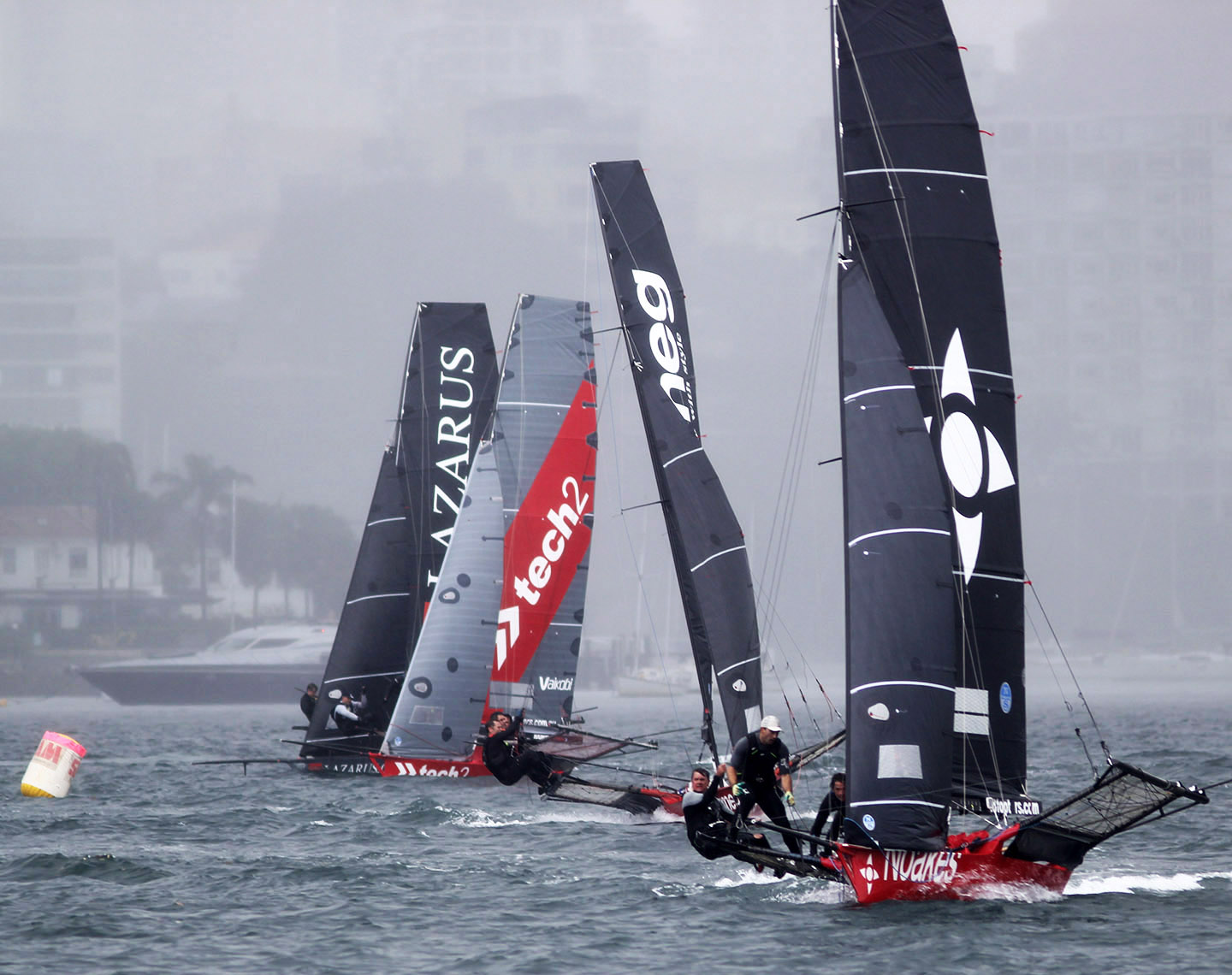 Race leaders at Clark Island on lap two of the first race in the NSW Championship. Pic - 18ft skiffs 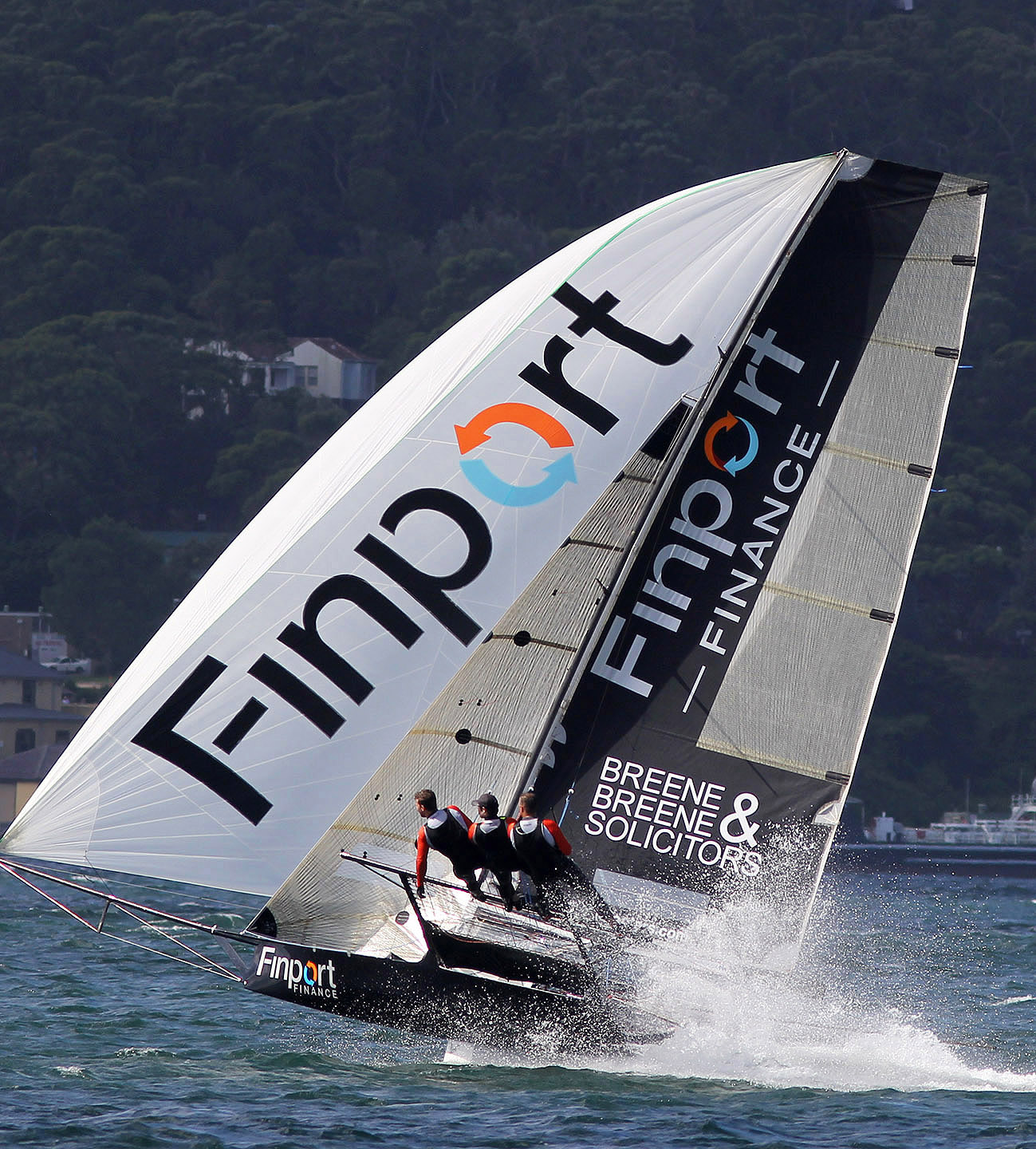 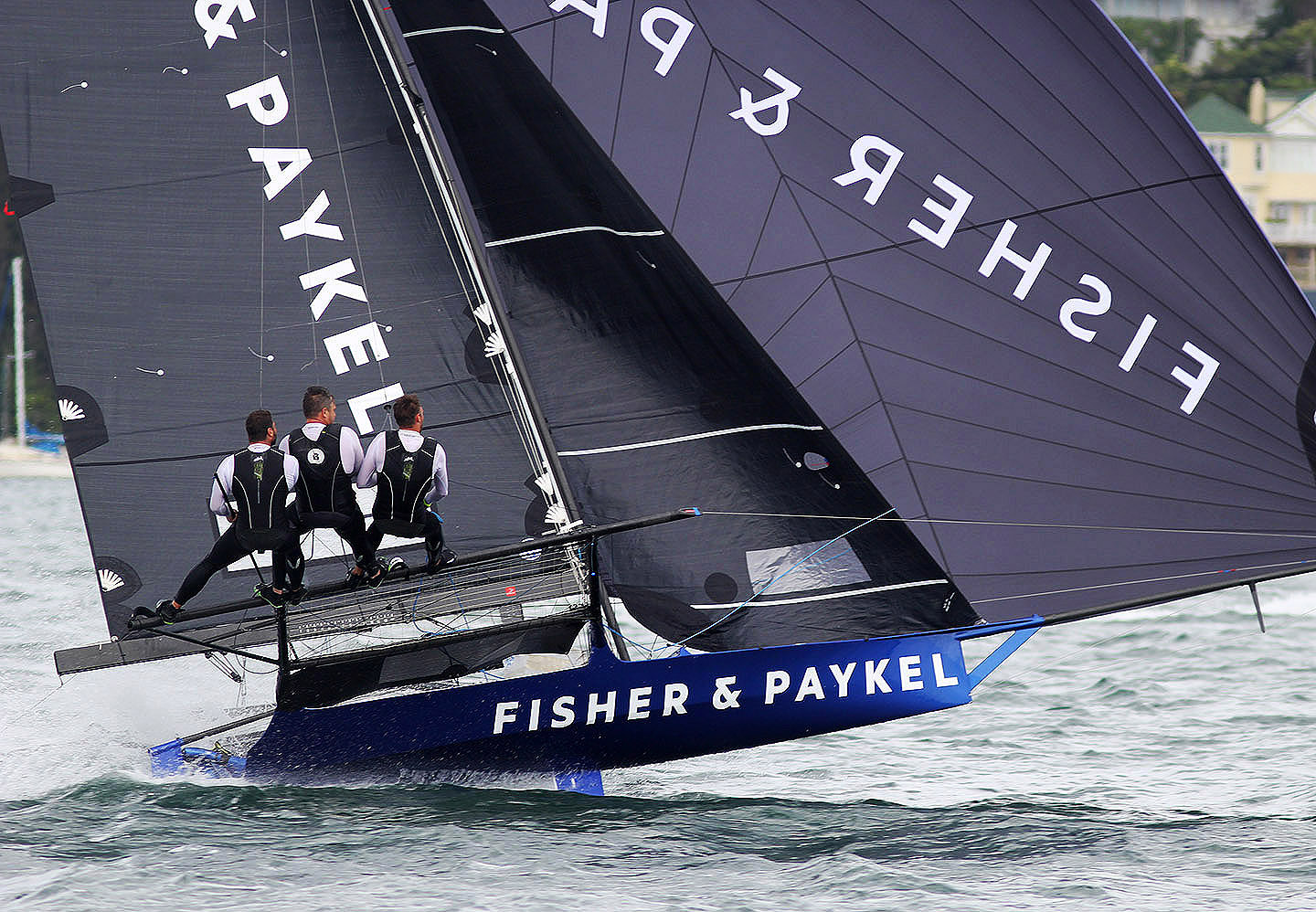 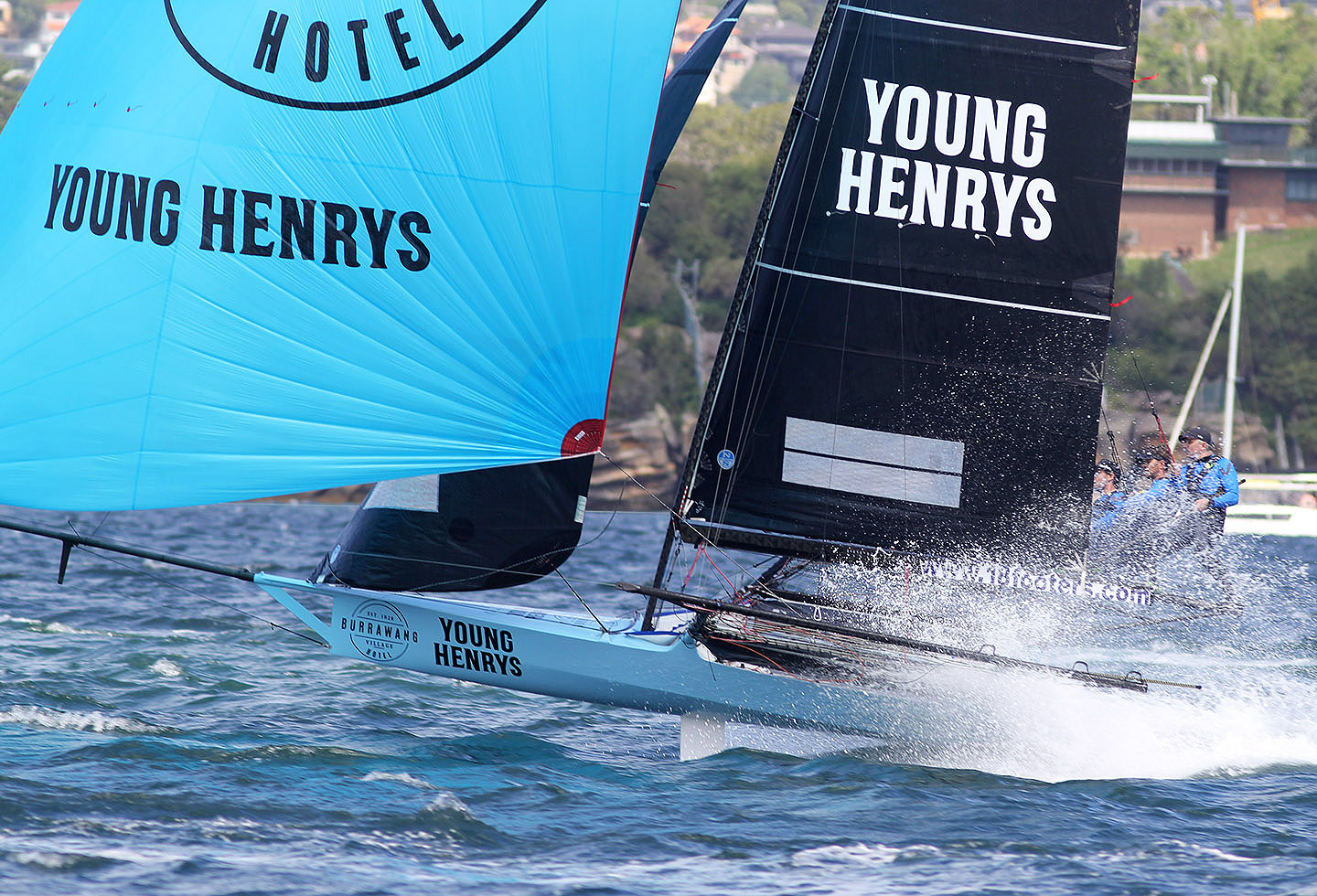 Despite a lack of traditional Northeast winds throughout the 2021-22 NSW 18ft skiff Championship, the racing has been fast, exciting and has produced some great finishes with four different teams crossing the finish line first in the seven races so far.

The champion will be determined in the final race of the series this Sunday (January 30) on Sydney Harbour, in the 21-boat fleet. Only one point separates the two teams at the top of the points table.

Series leader, Yandoo has a net total of 14 points, one ahead of defending champion Tech2 on 15 points, and the two teams couldn’t be more different.

The Yandoo team of John ‘Woody’ Winning, Mike Kennedy and Fang Warren are the oldest in the fleet. ‘Woody’, the 2000 JJ Giltinan world champion, is the oldest at 69 years.

Tech2’s team of Jack Macartney, Charlie Wyatt and Lewis Brake are not only the defending champions but are also winners of the last two Australian Championships, in 2019-20 and 2020-21.

Regardless of the age difference in the teams, both groups individually have many 18 footer and other class records of championship victories in their CVs, and are all sailing brilliantly in the tough conditions the fleet has experienced so far this season.

For a number of various reasons, the two series headers have established a break in points over the rest of the fleet and the winner will almost certainly come from either Yandoo or Tech2.

On form, however, the racing at the top end of the fleet is first class with at least seven or eight teams capable of winning Sunday’s race.

Aside from the obvious reason to determine who will be the 21-22 NSW champion, the race will also have great importance to all teams as it is the last hit out before the 100th Australian Championship is contested on the harbour from February 5-13.

With so many new and improving teams this season, the racing throughout the entire fleet has been extremely close and exciting for spectators.  There are always numerous 2-3-boat races going on within the main race.

The standard already reached by the new teams, together with the stronger performances for many of the existing teams has stamped this as possibly the strongest fleet at the Australian 18 Footers League for several seasons.

Steve Thomas, who is having his first season in the 18s, is skipper of Shaw and Partners Financial Services and is currently in fifth place overall, which includes two third placings, one fifth and one seventh in the last five starts.

Regular 18 footer skippers Jordan Girdis and Simon Nearn are both having a strong season based on consistency in almost every race condition.  Girdis is presently placed sixth in Fisher & Paykel while Nearn’s Burrawang-Young Henry’s team is seventh.

Spectators can follow Sunday’s championship-deciding race on board the club’s spectator ferry, however due to the COVID-19 policy, numbers are limited.  Booking online through the club’s website http://www.18footers.com.au/18-footers-sailing/spectator-ferry/ is essential.