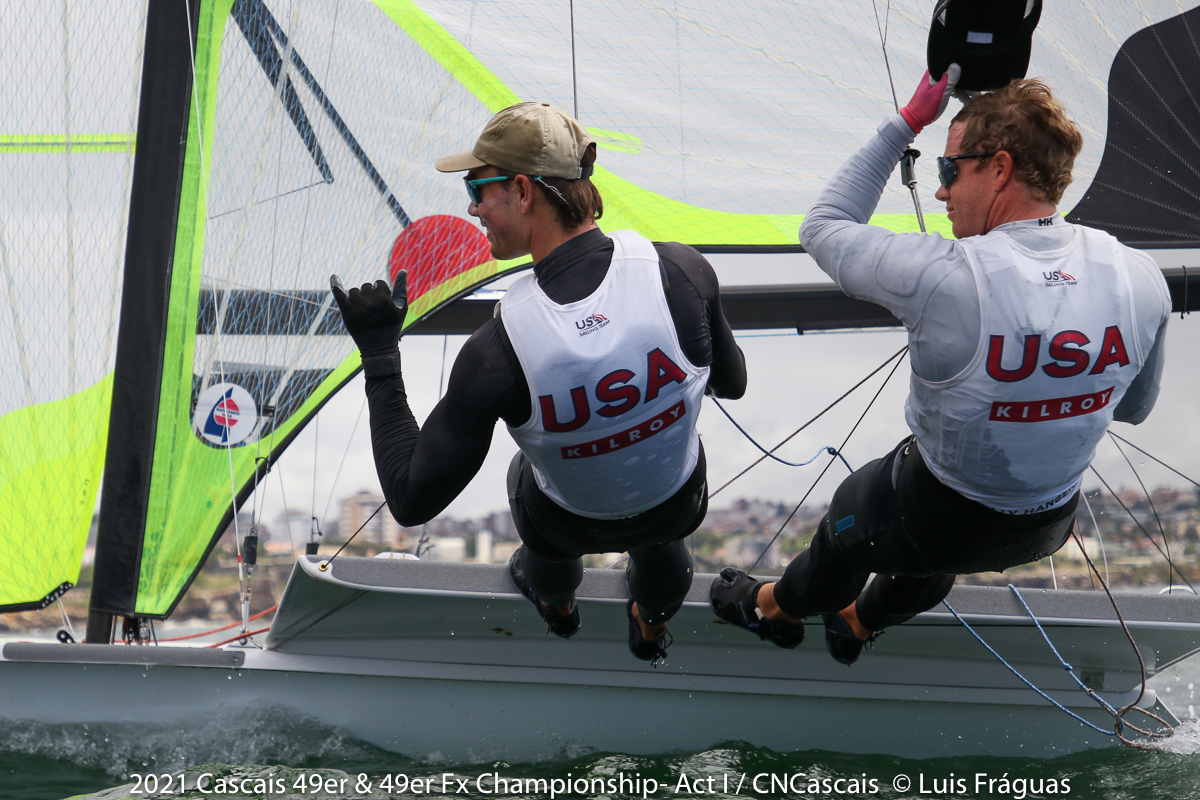 Portugal: Two months out from the Olympics, the big winners of the 49er and 49erFX Championships 2021 in the Olympic class 49er were the North Americans Nevin Snow and Dane Wilson, while Germany’s Tina Lutz and Susann Beucke held their nerve to win the 49erFX, and the Australian crew of Tess Lloyd and Jaime Ryan finished 18th overall.

After a stormy morning, the sun shyly appeared and Cascais Bay delivered the best for the Olympic sailors; fantastic conditions for sailing and similar to those that are experienced on Sagami Bay, in Tokyo, where the Olympics will be held in July. The 49ers were up first, at noon.

A nice 14-knot north-westerly found the sailors asking should they aim at the left side of the race course where the wind was more consistent with better pressure, or to right, here the wind direction was more favourable to reach the windward mark.

After the start signal, half the fleet went left, and the other to the right, and on approach to the first weather mark, both tactical choices paid equal dividends, with the young French team of Astride Girou/Noah Chauvin leading the race.

The French kept the lead for the first half of the race but lost it in the second part to Dickson/Waddilove. Locals, Jorge Lima/José Costa (POR) were making up ground on the leaders and chose the left-hand leeward gate, then headed right up the beat. The move bore fruit, as the moved into second place. Their local knowledge showed again on the last leg of the course, when they gybed before the Irish team, catching the wind shift first to take the Medal Race lead and went on to win the race.

Unfortunately, the victory in the final race was not enough to win a place on the podium and Lima and Costa finished the Championship fifth overall.

Lutz and Beucke come back to win 49erFX Medal Race
After the Men’s Medal Race, the Women’s 49erFX was up and sailed in a weaker wind that made the wind shift on the right more prominent.

Annemiek Bekkering/Annette Duetz (NED) started at the pin end and had an advantage over the rest of the fleet. They were followed by da Nielsen/Marie Olsen (DEN) who were trying to protect their small advantage in the overall standings. With a less successful start and nothing to lose, Charlotte Dobson/Saskia Tidey (GBR) bet on the right corner of the race course and gained a huge advantage over the rest of their opponents.

The English continued their lead to the first windward mark and held on to move up the leaderboard to finish sixth overall.

In the middle of the Medal Race fleet was where the podium places were decided on a close leaderboard. Leaders coming into the Medal Race, Tamara Echegoyen/Paula Barcelo (ESP) suffered difficulties and finished the Medal Race in eighth to drop back and win the Silver medal.

Tina Lutz/Susann Beucke (GER) sailed a conservative Medal Race and finished fourth, enough to give them the Gold medal by one point over the Spaniards.

And while the Danes and Dutch crews were fighting it out for Bronze, it was yesterday’s race winners, Martine Grael/Kahena Kunze with their new boat that won Bronze.
.
The 49er and 49FX Championship took place in Cascais, Portugal from the 4-9 of May, where 28 races and the Medal Race of each class took place

The next championship for the Olympic classes of 49er and 49erFX will be here in Cascais from 7-12 June. This Championship is only open to those teams already qualified for the Tokyo Olympic Games.