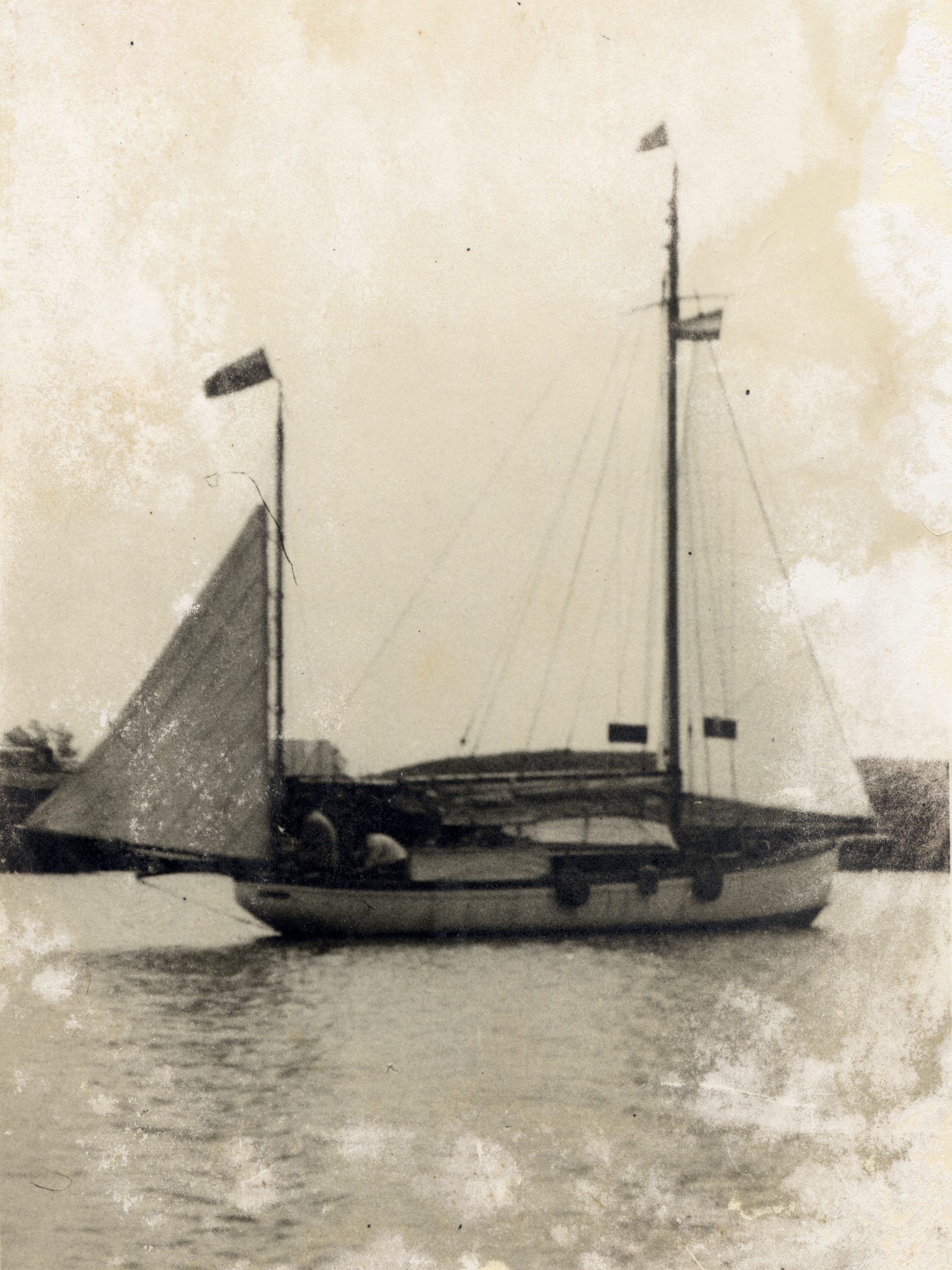 My mother and father owned a succession of sailing boats when my sister and I were growing up. They were all wooden and mostly old, rather like Maurice Griffith’s description about his early east coast years. Their first boat was the sailing smack Dauntless, which dad bought the year I was born in 1948 for maybe £50. He recalled, but did not know, that she had been built in Lowestoft at the turn of the 19th century.

It took him three years of hard graft to renovate her in the marshes on the upper reaches of the Crouch. Britain was then in a period of great austerity after World War Two.

After my grandmother Sampson died, my mother Peggy was left some money. Some of this was used to buy a lovely 30 foot yawl called Patience, built in Falmouth in 1908, in 1957 for £300 I think.

The smack had gone because she was far too big for us to manage as one family. But this lovely, low, deep yawl drawing over 6’, gave our family some wonderful cruising to Belgium, France and Holland during the late 50’s.

As my sister and I grew larger, they decided to sell her and buy a bigger boat. They had based Patience at Burnham, on Bob and Sony Cole’s moorings and Tucker Brown’s. This yard helped with any serious maintaining when it became necessary, even though my parents did as much as they could themselves trying to help keep the expenses down.

Neither my sister or I can remember exactly when they sold Patience and bought Brat. From Lloyds register my father is listed as the owner of Brat from 1962 to ’69. So, I guess, Patience must have been sold in the autumn of ’61.

I am certain that the Cole brothers helped them find Brat. They knew all the yachts at Burnham; plus, we were not made of loads of money like some of their customers. They also knew dad was very handy and worth keeping around!

Dad was also inspired by one of our family friends: the Farmers. George came from quite a wealthy background, he much admired my father’s creativity.

My father, apart from being a medical research scientist for May and Baker, invented many things; such as early yacht wind direction, speed instruments, medical tablet disintegrators, early gramatographs, polelalographs; as well as building us some amazing Christmas toys.

Brat was in a terrible mess when he bought her, but she had a great pedigree. Most importantly, a good hull survey told him she was sound.

Designed by old Charles E. Nicholson and built in Portsmouth in 1913; she was either teak, or pitch pine, on oak, 38’ long. She may even have been coppered to the waterline like Patience.

When I first saw it, after going down to Burnham before she was lifted out for the winter, as an early teen my reactions were not great. Poor dad, I thought! Her bows were up in the air, the gaff spars and sails all looked rotten, she stank of bird crap and mildew.

But I could see, though, she could be another interesting project for him.

We ditched huge amounts of gear over those weekends that had mostly been stored aft in her lazarette. Massive loads of new, heavy, galvanised rigging wire, rope, shackles etc. were taken ashore. Her old owner, who I think had died; obviously liked to horde gear.

When I first saw it properly sitting on the waterline, I knew why dad had bought it. With Charles E’s fine eye Brat had wonderful lines and should give us a beautiful large family yawl.

Built with the typical spoon bow and long sweet curved counter, though I still thought, still do, that her bow always looked a bit odd without a bowsprit.

So dad was starting on another old boat restoration but with Brat’s sound hull and with George Famer’s help. Also, having various bits of gear such as: new primary winches he designed, stainless steel mast fittings and bow roller. All made totally illegally by my father’s work pals at M & D.

Apparently, the old spars were sound enough to be lengthened by scarfing at TB’s. George designed the new Bermudan rig; new Dacron sails were made by Cranfield’s.

I cannot remember about seacocks, engine refit or many other things during that time; but, knowing my father, TB and George, they would have all been covered extremely well.

Dad also designed and built a doghouse. Although he was only in his early forties, he felt the North Sea cold after contracting tuberculosis and malaria from his service in Burma. Our long summer cruises were all offshore.

All this work happened in just one winter.

Brat was launched in late spring and we went off on another long summer holiday. Cruising France in company with the Farmer’s, who had a boat called Lothian designed by the young Charles Nicholson a sister to Griffin 1; the first RORC club yacht.

We had several more wonderful summers with Brat and raced her at Burnham and some offshore east coast races. Unfortunately though, for my parents, Pat and I were rapidly growing up. We both had much less interest spending half of school holidays cruising them.

They then went off, as two couples with the Moss’s boat, cruising; they had become great friends after they’d lost their older children.

Due to my father’s research team breaking up at M&B, plus his overworking all his tough life, he had a small breakdown; so they had to sell Brat in 1969.

We lost touch with Brat. I had a vague memory of reading in Yachting Monthly, about 1970, that a young group of sailors had taken it to South Africa.

Reading just the other day that it is going to be rebuilt there in SA  gave my heart a bit of a turn; Brat is a beautiful old classic.

After comparing photos of it to what we have in black and white’s has convinced me this is, indeed, Brat. Many old wooden boats die through lack of money, rainwater, no love, commitment. They just most go.

I am sure both my parents would be thrilled to see Brat starting to grow strong again after 106 years. They will both be watching with interest!

There is no reason why Brat could not have been at Dunkirk either; we have no record of all the little ships that went there. Yet another tragic amateur British historic bodge; we seem to have a history full of them. ≈