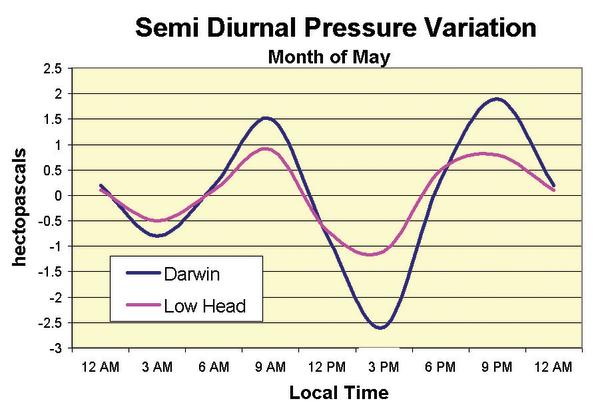 It is February and you are anchored in a little bay in remote Arnhem Land.

For some reason you have been unable to communicate with the outside world for a few days. However, you have been watching the barometer as a guide to any upcoming bad weather. You last read and recorded the barometer in your log at 1500 local time and it was 1004 hectopascals (hPa – old millibars). You have had a big day and it is 2100 and you are just about to go to bed. You check the barometer again and it has only fallen 1hPa so you decide to turn in.

This could be one of the biggest mistakes of your life, you could be very much in danger!

During the six hour period in question the air pressure in that part of the world should have risen around 5hPa. If you combine this expected rise of 5hPa to the 1hPa real fall in the barometer there is a resulting fall of 6hPa over a period of six hours: 1hPa an hour.

In temperate latitudes this could be the beginnings of a ‘bomb low’ developing; with a developing bomb low you would expect a 24hPa fall over 24 hours. In the tropics in February a fall of that kind could be a tropical low or cyclone, either developing or moving towards your location. Either way going to bed is probably not the best course of action.

What has been missed here is the effect of the atmospheric tide. Just like a regular ocean tide, the atmosphere has two high peaks and two low peaks a day.

A high and low ocean tide is measurable by the depth of the water; an atmospheric tide is measured by a rising and falling barometer. Normal ocean tides have an average of around 12 hours to 13 hours difference between a given high tide and the corresponding one for the next day: advancing the tides through the clock. This is, of course, in a two tides per day system.

Atmospheric tides happen at more or less the same time each day, with two highs and two lows per day. The high air pressure tides occur at around 10am and 10pm and low tides around 4am and 4pm. These are local times and are the same the world over.

The sun, directly above an area around noon and into the early afternoon, heats up the atmosphere, which expands as a column. The expansion of this column of air sets a pressure wave (low atmospheric tide) in motion that moves around the globe. This is fairly straight forward: the solar heating causes the atmosphere to expand and reduces the pressure, producing an atmospheric low tide.

It then gets a bit tricky with the other high and low tides.

Ideally there should be a corresponding high tide on the other side of the globe, the dark side of the Earth, from where the afternoon heating is occurring; i.e. twelve hours away. But it is actually another low tide!

I have not been able to find an explanation that a mere mortal like myself can understand and then explain. It has to do with pressure waves, heating of the upper reaches of the atmosphere and expansion of water vapour in a column.
In this case, just believe and know there are two highs and two lows of atmospheric tide approximately six hours apart.

The highest air pressures recorded on the Earth’s surface are around 1085hPa. Pressures such as these are only found in the high pressure that forms over a large area of north east Eurasia (Russia, Siberia, China, Mongolia) during its winter.

The air in the Mongolian/Siberian high pressure system is very cold and very dry. In fact, Oymyakon in Siberia is one of the coldest inhabited places on Earth. In the winter, the average minimum temperature is between -40°C and -60°C with a record low recorded of -67°C. Summer time maximums are an average low 20°C but can reach 35°C.

This temperature range of over 100 degrees Celsius is pretty unique. This high-pressure system helps to ‘push’ the monsoon onto northern Australia.

The lowest pressure recorded was in a cyclone in Guam with a pressure reading of 870hPa. Pressures inside some tornados may be lower but they are very hard to measure for obvious reasons. ≈