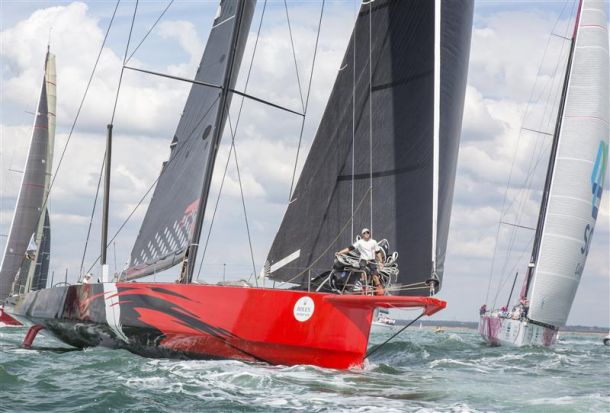 Michael Logan from the Bureau of Meteorology explained this morning that the Rolex Sydney Hobart fleet is in for a tough first night as a Southerly front is expected to hit the fleet.

The fleet will start in a strengthening nor-easter before a strong southerly changes of around 25-35knots hits during the evening. There should be pleasant conditions for the start with showers and thunder expected later in the day.

Logan explained that the models were predicting different things for Bass Strait. There is the possibility of a low pressure developing and the fleet will face south to south-westerly winds. But he said, “The winds are not likely to be what we saw in 1998.

“We will be watching very carefully over the next few days.”

Wild Oats XI nagivator Juan Vila explained that Bob Oatley's 100 footer was preparing for the worst case scenario. Vila is looking at different models, some say it is going to be light after the front. There are “two scenarios after the front that are black and white”. One is strong with 40-50 knots while the other is light breeze.

While Adrienne Cahalan from Perpetual Loyal pointed out that it was the European model that was consistently forecasting the low pressure but it is “still a few days out and things can change”.

“The first night of 25-35knots will be very tough on the fleet. It would be nice if that low didn't form.”

Comanche is known to love the strong wind and Stan Honey was confident with the forecast. “We are preparing for a full range of forecasts we have seen. We are not eager to race in scenarios that have 12 hours light air.

“Runs and routes show that when the southerly change hits we will be on a reach.”

But he said there was still wide variation in the forecast. Right now they won't have long light airs which is good for the American maxi.

But as Michael Logan said “This is the long range forecast and we should keep that in mind.”

For those concerned about it being as bad at the 1998 race, Michael Broughton from Pretty Fly III explained that a huge amount has changed since 98, EPIRBS, trackers, AIS even training has been improved. The 1979 Fastnet Race changed ocean racing, as did the 1998 Sydney Hobart. “It is a much better sport, a much safer sport.”

So there you have it. The fleet will start in a nor-easter but the first night will be tough with a 25-35 knot southerly. After that could be another low pressure system or some light winds. I wouldn't be putting my money on anyone just yet.