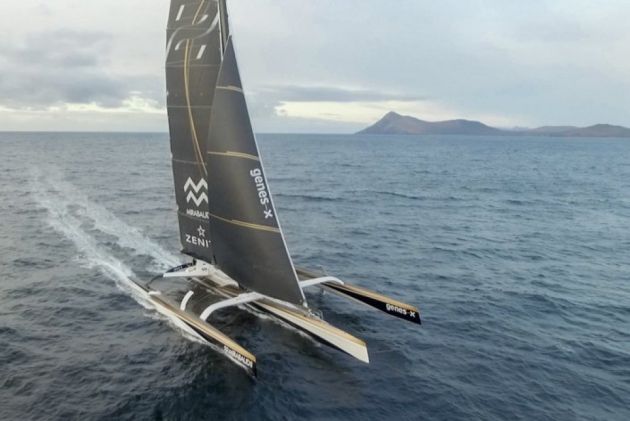 Spindrift 2 passed close to the legendary Cape Horn on Monday morning at 8:09 am UTC before heading up the Atlantic, passing through the Le Maire Strait during the middle of the afternoon.

With 18h 11mn up on the split time set by the current Jules Verne Trophy holder, Yann Guichard, Dona Bertarelli and their twelve-man crew took advantage of some respite, with the north wind disrupted by the proximity of the steep Argentinian coastline and the immense currents that rage between the Pacific and Atlantic oceans.

Once she has cleared the Le Maire Strait (between Tierra del Fuego and Isla de los Estados), Spindrift 2 will once again be showing all her might and power in the open seas. On Wednesday, a low that is currently forming will allow Spindrift 2 to lengthen her stride as she sails downwind, leaving the Falkland Islands to starboard. She will be able to maintain her fast pace all the way up to the latitude of Uruguay, after which the Saint Helena low will determine whether she can reach the Equator in a faster time than Banque Populaire in 2011: 7d 4h 27m!

This morning, Spindrift 2 skipper Yann Guichard shared his thoughts on rounding Cape Horn, which he saw for the first time in his career.

“My favourite memory will be of passing Cape Horn in the sun, with 15 knots of wind and a flat sea: we had time to enjoy it because we skirted the coast…Honestly, it was just fantastic. Dona spoke with the lighthouse keeper, it was really a nice moment: everyone was awake and on deck. This marks one month of adventure that is going well.“

“My goal since leaving Ushant was to arrive at Cape Horn within the time of Banque Populaire V: that's done, now it's the weather that will decide. But we’ve already had an excellent voyage; I’m delighted with my crew and the atmosphere on board, it's really great.”

“It’s a once in a lifetime experience to see the rock at the end of the world after 30 days of shared enjoyment at sea. We were surrounded by birds all the way across the Indian and Pacific Oceans. We saw albatrosses but not the big swell. Other than that, I have continuous stress about looking after things, because I know that if we finish, we will be in record time. It is really the management of men and the machine that preoccupies me every day; it’s tiring, but it’s also enjoyable.”

“We’ll try to catch a depression in 30 hours that will take us to Uruguay, where I expect that there will be an anticyclone to manage. These are not easy conditions in the South Atlantic, but it’s often the way. We will not be as fast as Banque Populaire V, which had an almost straight track. For us, it will be more complicated, but we’ll have to get out of the Le Maire Strait first to see things a little more clearly.”

“We're on record pace and I hope that will still be the case at the Equator. We’ll surely have lost some ground, but I hope we can still try to beat the record whatever happens, but it's going be really tight all the way to the end.”

Dona Bertarelli also became a Cape Horner and could not hide her excitement about this important moment for the entire Spindrift 2 crew after 30 days at sea.

“It was fantastic. I was blown away by the beauty of the place, at sunrise, with blue skies and 15 knots of wind gliding along the coast. Everything was just perfect. Right now the conditions are quite light, we have a little bit less of 12 knots of wind, we were expecting those conditions…”

“We just spent three weeks in the Southern seas where the conditions are quite hostile. There were tough moments. The team is doing a great job and we’re very happy with our performances. I will only keep the good memories. At the start, we were very happy that IDEC started at the same time, it seemed incredible to have two boats around the world. It was also reassuring to know that if there was a problem in the Southern Ocean, there were friends nearby. But all in all, it is still somewhat stressful that there is a competitor we have to worry about. Of course, we keep an eye on what they are doing.”

Cape horners on board