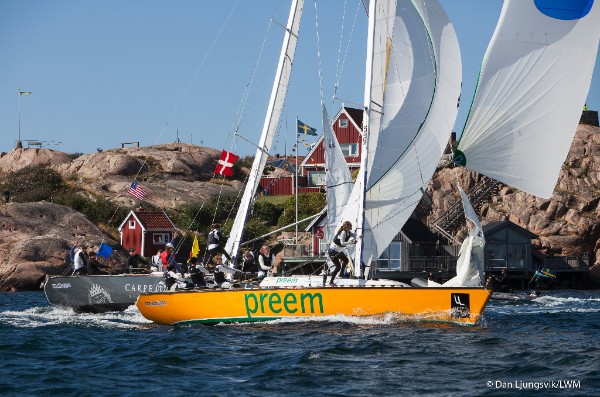 With no less than five consecutive wins in Lysekil Women’s Match, World #1 Camilla Ulrikkeholm Klinkby, DEN, is definitely the name to look out for this week. But Swede Anna Östling is aiming to win her home event for the first time. And last year’s Lysekil finalist and WIM Series champion Stephanie Roble, USA, also aspires on the top of the podium:

“Definitely. We’ve sailed these boats a lot and I’m very confident in my team. My crew is my secret weapon, and we’ll pick up right where we left” says Roble.

The name Camilla Ulrikkeholm Klinkby is somewhat synonymous with Lysekil Women’s Match. The Danish skipper sailed in Lysekil for the first time in 2006, finishing 6th, followed by modest results also the coming years; 11th, 7th and 6th. But since 2011 she’s owned the top spot, earning as much as 60 000 USD of prize money. Her team’s skills in the DS 37 boats raced in Lysekil, is a key success factor:

“We’ve been practising and racing in these boats at the Royal Danish Yacht Club for a dozen years now, and that’s of course an advantage against crews with less experience of these rather challenging boat” she admits.

Local hope Anna Östling is also very familiar with the DS 37s, from the match racing centre at her home club, the Royal Gothenburg Yacht Club. A month ago she won the first WIM Series event in Helsinki, Finland, and she’s now prepared to repeat that triumph on her home waters:

“Normally we don’t set results goals, we rather talk about cooperation, team work and energy. But of course we want to win here in Lysekil this year. It’s about time” she comments, adding that the fierce competition will demand a lot of strength and concentration throughout the week.

World Champion Lotte Meldgaard is another skipper who will do her outmost to give her compatriot Ulrikkeholm Klinkby a run for her money. Meldgaard has come to Lysekil with a new crew compilation, including more experienced members as well as keen rookies. Perhaps they are among the crews that could have needed the practise session scheduled for Monday, but that opportunity blew away with gale force winds, pushing the race management to keep the sailors ashore for the whole day.

The wind forecast doesn’t look very promising for Tuesday either, but there may be a chance to fit a short practise session and/or a few matches late Tuesday afternoon:

“Lysekil Women’s Match sets the bar for a great match racing event – both on and off the water. The event is a benchmark for what we aspire all of the WIM Series events to achieve. The arena for the sailing is fantastic and the festival atmosphere for spectators is hard to beat. Aside from watching the world class match racing and cheering on their heroes, fans of all ages can have a great time visiting the vendors, enjoying the concerts, and even trying some sailing of their own.”