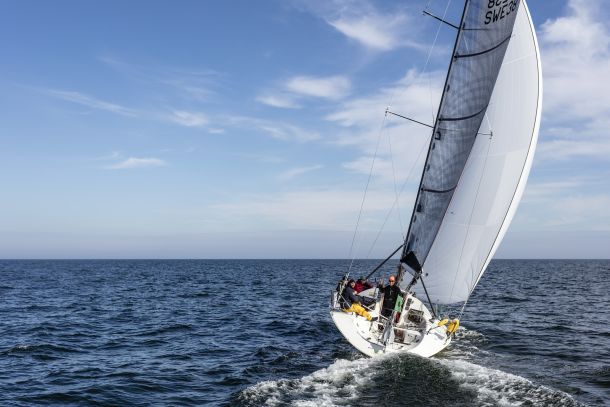 This year´s åF Offshore Race – round Gotland is over. Bugia Bianca from Västerås won the big championship class (ORCi) and Pac-Man from Stockholm won the Swedish measurement system class (SRS).

The classical regatta around Gotland in the Baltic sea has offered good conditions with much sun and good winds – at least from the beginning. During Sunday and Monday it was fast racing out of the archipelago and down to Gotland. The fastest boats were back in Sandhamn less than 48 hours after the start.

For the smaller and slower boats it has taken much more time since the wind out in the Baltic slowed down on Tuesday evening. Wednesday continued with the light winds and many boats hardly moved out at sea.

At that time the winners were safe in harbour. So this year was the big boat´s race. Last year it was on the contrary.

Bugia Bianca is a modern Swan 70, owned and sailed by Marcus Wallenberg. He had a lot of experienced sailors on board such as Magnus Woxén, Calle Hennix, Lasse Tapper and Olle Jo Johansson.

– We knew we could win if we had the right weather and sailed well. It was a fast race as we did not have any doldrums that are normal around Gotland. The few strategic decisions we made were correct, says Magnus Woxén.

In the big SRS class with 150 boats the little strange boat Pac-Man won. The skipper Jimmy Hellberg has been very close to winning many times.

“I have sailed at least ten times. I have done five really serious attempts and I have been second once. I have dreamt of winning since the first time I participated at the age of 18 – 19 years,” says 41 years old Jimmy and continues: “The boat is not beautiful but well built and weighs only three tons – in sailing outfit. That is what gives it its fantastic sailing performances. Her weight is less than half of a modern 38 footer.

“But I can never sell her. It just is not possible. She is too ugly. If I want to get rid of her I must give her away…”