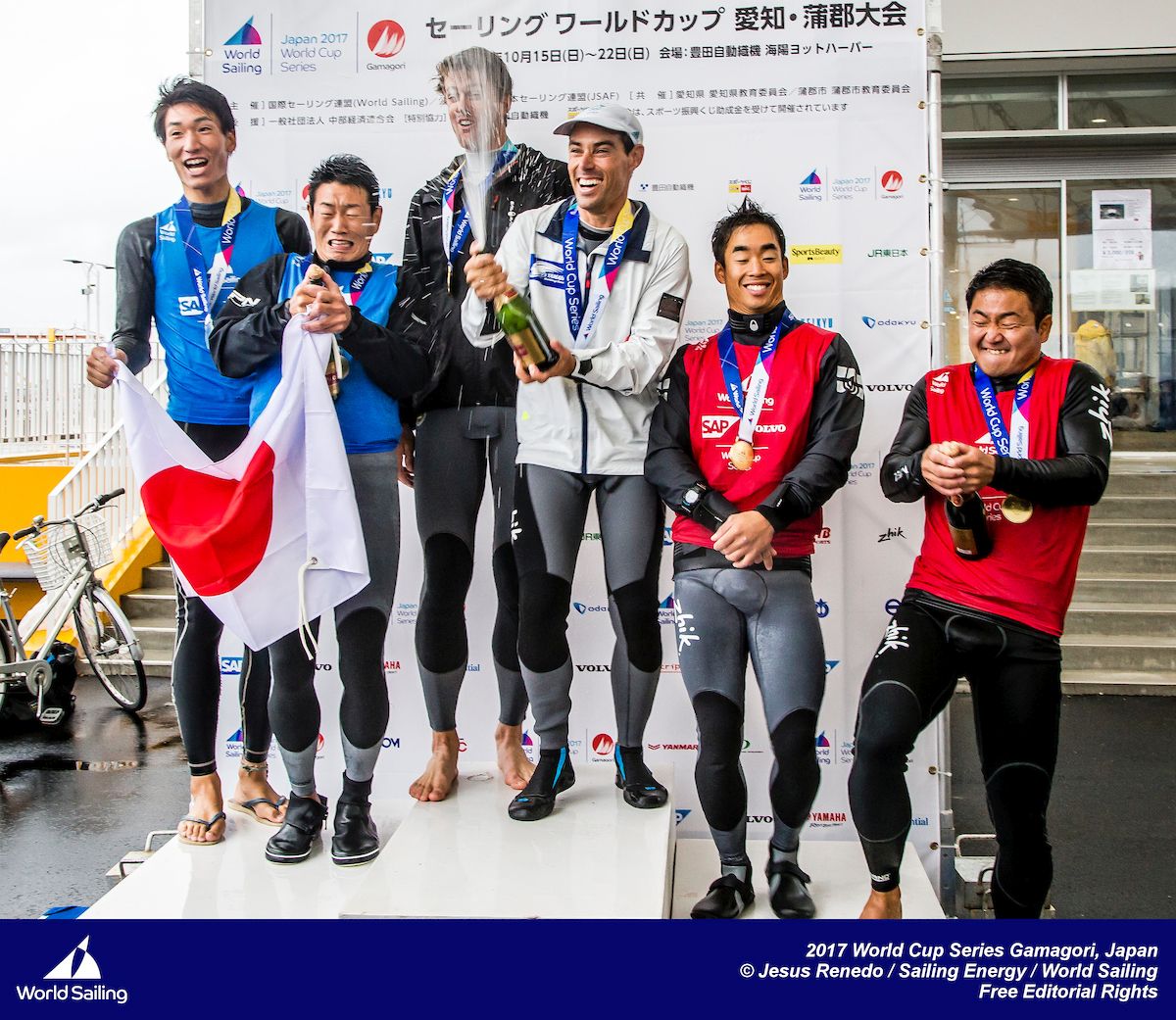 Mat Belcher and Will Ryan on top of the podium in Japan. Photo Jesus Renedo/Sailing Energy.

Five more World Cup Series Japan champions were decided in Gamagori as the inaugural World Sailing event in the land of the rising came to a close.

As Typhoon Lan heads towards Japan, racing was scheduled to commence at the earlier time of 10:40. A light 3-10 knot breeze from the north made things challenging, as the wind varied in strength and direction throughout the morning.

The Men's and Women's One Person Dinghies (Laser/Laser Radial) and Women's Two Person Dinghy (470) completed their Medal Races but a decision to cancel racing for the day was made at 14:00 local time with the impending arrival of Typhoon Lan.

Gold medals in the Laser, Laser Radial and Women's 470 went to sailors from Denmark, New Zealand and Japan. The Men's Two Person Dinghy (470) and Men's Windsurfer (RS:X) did not sail their Medal Race due to the cancellation and the results from overnight stood.

Greece's Vasileia Karachaliou suffered heartbreak in the Laser Radial after she was disqualified at the start of the Medal Race.

Karachaliou held a seven-point lead ahead of the Medal Race but crossed the start line early which meant she would count 22 points in her score line.

This threw the competition wide open and Emma Plasschaert (BEL), Anne-Marie Rindom (DEN) and Josefin Olsson (SWE) were able to fight for the medals in a light breeze.

The Greek racer could still claim a medal but results would have to go her way.

Rindom saw Karachaliou cross as the start and new she could take the initiative, “I was starting all the way at the right end and I could see that she was over. I heard her number when the start was on so I just had to keep an eye on Sweden and Belgium, keeping as close to them as possible.”

Rindom held her nerve, demonstrating exceptional light wind sailing. She crossed the finish line in third place which handed her gold and after racing, the smiling, vibrant Dane was as cool as cool can be, “It wasn't that stressful,” she exclaimed. “I started in third position and that was good for me. I was always trying to catch up so winning is really nice.”

Emma Plasschaert (BEL) finished just one point behind the Dane after a fifth in the Medal Race. She claimed silver and Sweden's Olsson completed the podium.

Karachaliou was tied on points with Olsson but missed out on a medal as any ties in the Medal Race are decided on the athletes finishing position in the race.

The battle for gold in the Laser was between Rio 2016 bronze medallist Sam Meech (NZL) and London 2012 silver medallist Pavlos Kontides (CYP).

Meech led Kontides by three points ahead of the Medal Race and the pair matched each other like for like at the start as they looked to gain an advantage.

Meech managed to gain the upper hand and kept Kontides behind him in the early stages but he didn't have it easy, “I thought I was in a good position but it got pretty tough for me. I was hoping we [Kontides and Meech] would be at the back but we popped out at the front so that made it a lot more difficult.

With boats chasing hard, Kontides was always in with a chance as places changed hands. Meech continued, “Luckily I was just able to keep sneaking ahead. It was a big relief to get round the final mark.”

Gold was confirmed for Meech when he crossed the finish line in fourth place with Kontides behind him, in seventh, to seal silver.

As Meech and Kontides fought it out, Tom Burton (AUS) was focusing on moving up into the podium places and he streaked ahead, grabbing the lead from the off and never relinquishing it. Lorenzo Chiavarini (GBR) held third place overnight but he finished sixth and dropped off the podium as Burton moved up into bronze.

2017 Women's 470 World Champions Agnieszka Skrzypulec and Irmina Mrózek Gliszczynska (POL) put themselves in a commanding position going into the Medal Race after a consistent week of racing.

The Polish duo kept out of trouble at the start and put themselves in the middle of the fleet and firmly in control. They got ahead of the pack and with clean wind in their sails, they raced ahead, claiming a stylish victory and gold.

“We are really happy and proud. Today we sailed the race how we wanted to,” said Skrzypulec. “We spoke before about the strategy and I am happy that we managed to do everything perfectly.

“We won the World Championships in the 470 this year, which was a historical victory because no one from Poland has ever done that before.

“This is a first medal from the World Cup, first gold but second gold in the 470 fleet this year.

“This makes this season really special.”

As Typhoon Lan approached, a decision was made to cancel racing, in advance of its arrival, to ensure the safety of the athletes and officials.

This meant that the Men's Two Person Dinghy (470) and Men's Windsurfer (RS:X) results from overnight would be final.

Mat Belcher and Will Ryan (AUS) picked up gold in the 470 with Japanese sailors Tetsuya Isozaki and Akira Takayanagi finishing second. Ryo Imamura and Jumpei Hokazono (JPN) completed the podium

Many of the athletes competing in Gamagori will now head 300km up the coast to Enoshima, host venue of the Tokyo 2020 Olympic Games, for training and Enoshima Olympic Week.

Following that, racers will head to Miami, USA for the second leg of the 2017-18 World Cup Series in January 2018.