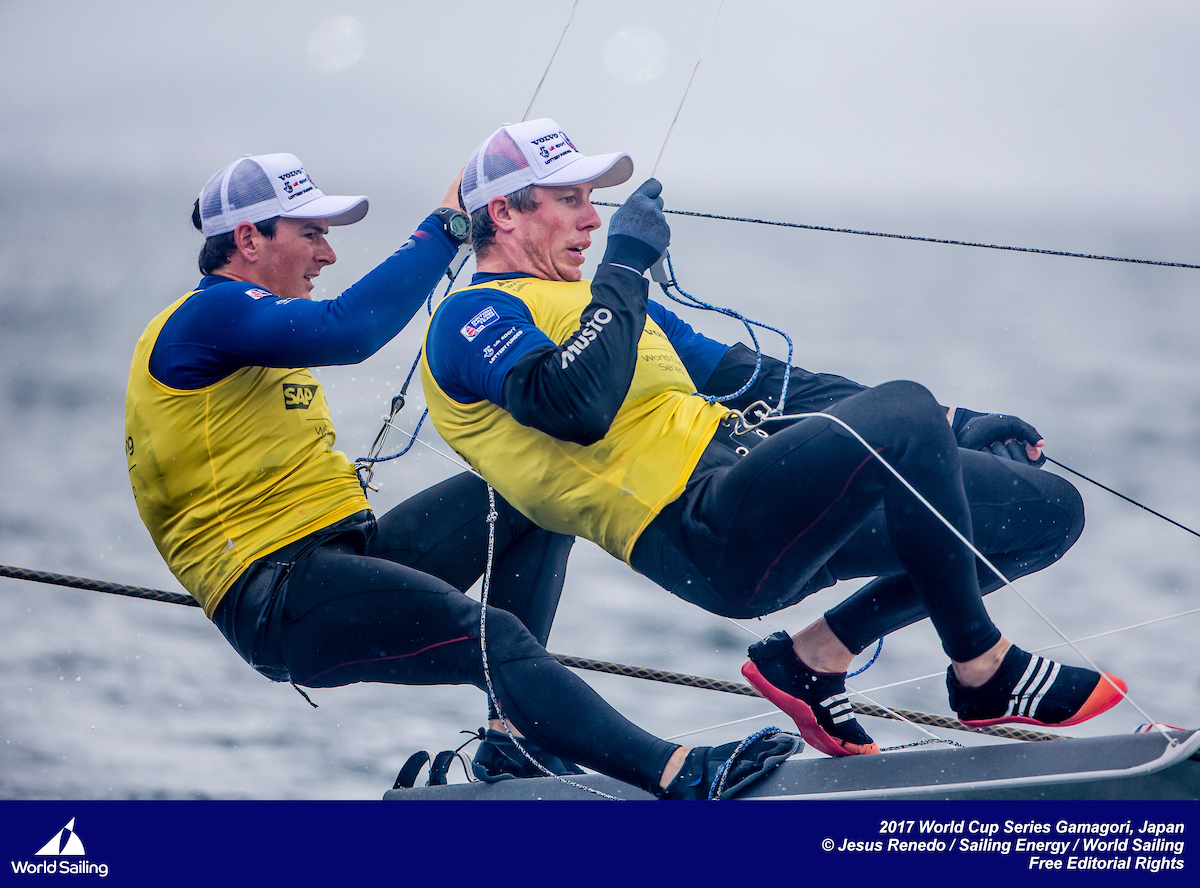 The first medallists at the inaugural World Cup Series event in Japan have been decided after a wet Saturday in Gamagori, Japan.

Typhoon Lan is expected to hit Japan late on Sunday 22 October, well after competition has concluded in Gamagori, but in advance of its arrival, torrential rain is passing through.

Come rain or shine, as long as there's wind and conditions are deemed safe for racing, the competition goes ahead and the Men's and Women's Skiff (49er/49erFX) and Women's RS:X medals were decided in a variable breeze that hit 12 knots and went as low as 3 knots.

In the 49er and 49erFX, the fleets sailed three single point Medal Races within a physical boundary. Each race took ten minutes, ensuring close calls within the fleet.

After the first two races in both fleets, it went down to the wire.

In the 49er, Fletcher and Bithell and their national team mates, James Peters and Fynn Sterritt were locked in a battle for supremacy – a familiar sight after the two Brits finished first and second at the 2017 World Championship.

“We were both guaranteed silver going into the last race,” Fletcher commented. “We chose to match race them to put us as far as possible down the fleet to ensure we would beat them because we were ahead on points.

“It was going smoothly until we made a mistake, at the bottom, and they wiggled free.”

Peters and Sterritt managed to put themselves in gold medal position but right at the finish, the Brits got caught up in a cluster of boats and were sandwiched between the finishing boat and some of their rivals.

This opened the door for Fletcher and Bithell who sailed through for gold and their compatriots had to settle for silver. Poland's Lukasz Przybytek and Pawel Kolodzinski took bronze.

Five teams were in with a realistic chance of claiming gold in the 49erFX as it went down to the final race. Every competitor knew they had to do their upmost to be at the front of the fleet as it would pay off in the end.

A second place in the final race paid off for Argentina's Victoria Travascio and Maria Branz and they moved from the bronze medal position to clinch their first ever World Cup Series gold.

“It was stressful because we didn't have any point calculations or maths to strategize,” commented Branz, “But we managed to do well in the last race, as we wanted.

“We didn't know what we had to do but we just tried our best to win the race.”

Tanja Frank and Lorena Abicht (AUT) followed behind the Argentineans in third to pick up silver. Japan's Sayoko Harada and Sera Nagamatsu held a four-point lead heading into the final race. They finished seventh which was only just enough to hold on to bronze.

The Women's RS:X sailed a single, double point Medal Race, late in on the day in Gamagori as the rain continued and the light drew in.

There was very little separating the leading competitors so whoever finished at the front of the pack would take gold.

Hong Kong's Chan started racing in Gamagori carrying an injury, but she pushed ahead through the pain and a second in the Medal Race handed her gold.

“I initially didn't think I was going to race because I had an injury the day I arrived in Gamagori,” explained Chan. “I got an injury on my hip and legs and I struggled walking.

“I just had to do my best, play to my strengths and I managed to attack at the finish. This regatta we have had a smaller fleet and it makes it a different game compared to racing in a bigger fleet. Every point counts, so it has been quite hard for me.”

In the day's non-Medal Races the Men's and Women's Two Person Dinghy (470) and One Person Dinghy, (Laser and Laser Radial) all completed just one race each.

Belcher and Ryan hold a large 15-point advantage over the rest of the field going into the Medal Race though.

It was Poland's Agnieszka Skrzypulec and Irmina Mrózek Gliszczynska who took the honours in the Women's fleet and extended their lead at the top to nine points. Carrie Smith and Jaime Ryan (AUS) came second, with Ai Kondo Yoshida and Miho Yoshioka third.

In the Men's Laser, Jonatan Vadnai of Hungary crossed the line first, ahead of, Rio 2016 gold medallist, Tom Burton. Sam Meech (NZL) completed the top three in the race, but sits first in the overall standings.

Finally, in the Women's division the familiar names of Emma Plasschaert (BEL), Anne-Marie Rindom (DEN) and Dolores Moreira Fraschini (URU) finished first, second and third. However, it is Greek sailor Vasileia Karachaliou who holds the overall seven-point advantage over the rest of the fleet.

The Men's RS:X was unable to sail their Medal Race so will conclude their racing on Sunday 22 October.

Due to Typhoon Lan approaching, racing is scheduled to start at the earlier time of 10:35 local time.

The racing will be live and available to watch on World Sailing's Network. http://youtube.com/worldsailingtv