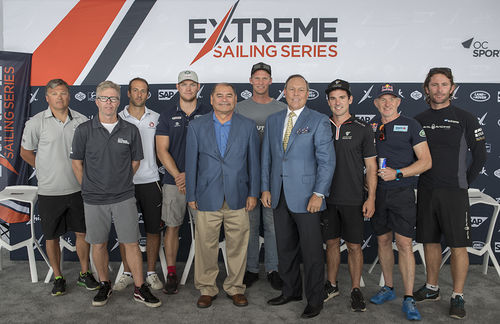 Alinghi and Land Rover BAR Academy were the teams to beat on the opening day of the penultimate Act of the 2017 Extreme Sailing Series™ in San Diego, USA, but it was the Swiss who demonstrated their prowess in the light winds and took the overnight lead as they left the Brits floundering in the final race.

For Alinghi's helm Arnaud Psarofaghis it was a good day at the office. The defending champion currently sits in third on the overall leader board and the pressure is on as it nears the end of the season.

“We've had a great day. The boat was going fast and we had consistent results. We had some really lucky moves when we read the racecourse quite nicely, even coming back from an OCS start [over the line early], but it's only the first day so we'll have to sail better tomorrow as well,” said Psarofaghis, whose team now holds a five-point lead.

Land Rover BAR Academy – helmed by four-time Olympic gold medallist Ben Ainslie – also put in a strong performance which almost matched Alinghi's. Going into the final race the two were tied on points but, as Alinghi crossed the line in first, the wind died and the Brits were unable to complete the course in the allotted time and did not finish.

“The conditions today were quite light but it was a good day for our team. It's the first day of racing in a GC32 in the Extreme Sailing Series for me and it's great to be with the Land Rover BAR Academy team,” commented Ainslie.

“I think the guys are sailing the boat pretty well. Probably myself steering and certainly getting off the start line always helps in this fleet. I thought we gelled together well as a team and for sure we can make some improvements for tomorrow and have some more good racing – I'm looking forward to it,” he added.

For Adam Minoprio, helm of current Series leader SAP Extreme Sailing Team, things did not quite go to plan. Their moment of glory came in the final windless race of the day where they found a breath of wind to carry them past Oman Air and over the line in second, to rapturous applause from the crowd.

“It was a pretty bad start for us, it didn't feel like we were sailing well at all and then we got a bit more breeze and had the best race of the day for us. In the last race we managed to spring our way back with a bit of luck at the end,” said Minoprio, whose team took third.

Despite a win in race four, Red Bull Sailing Team took sixth and NZ Extreme Sailing Team seventh. The second US wildcard Lupe Tortilla Demetrio, a brand-new team to compete on the boat and in the Series, took eighth.

Seventeen year-old Toni Vodisek was the champion of the day in the inaugural Extreme San Diego Kiteboarding Invitational. The 15 international kiteboarders took to San Diego Bay and put on a foiling spectacle for the crowds in the Race Village. They will resume racing tomorrow at 12:00 UTC-7.

The GC32 Stadium Racing kicks off tomorrow at 14:00 UTC-7. The free-to-enter public Race Village is open from 10:00 local time with plenty of entertainment scheduled throughout the day.