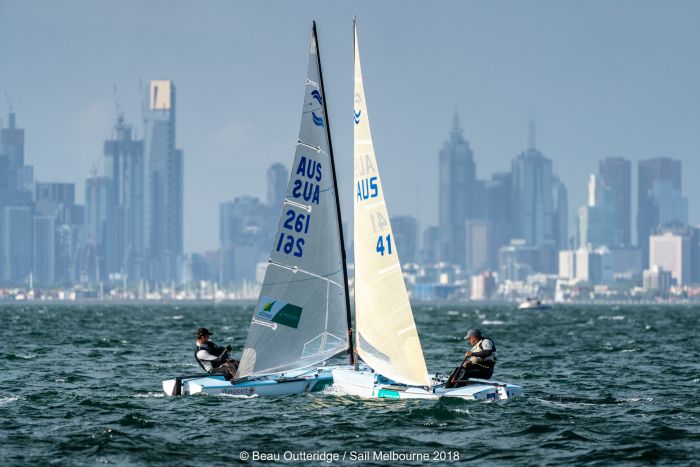 It will be a home affair for Melbourne’s world class Finn sailor Oliver Tweddell when the Finn Gold Cup – the World Championships of the Olympic Finn class – starts in Melbourne in a couple of weeks.

Seven months out from the Tokyo 2020 Olympic Games, Royal Brighton Yacht Club will be hosting the season pinnacle event for the Olympic Finn class December 13 – 21 2019 and the world’s best Finn sailors have arrived in Melbourne in preparation for the big event in two weeks and some warm-up regattas on Port Phillip in the lead up, starting on the weekend.

The Finn Gold Cup will also double up as the Tokyo 2020 Oceania qualifier and the last chance for Australia’s Finn sailors to secure a quota spot for Tokyo next year.

Over 60 sailors from more than 20 countries including Rio 2016 Olympic champion Giles Scott (GBR), 2018 World Champion Zsombor Berecz (HUN) and World #2 Nicholas Heiner from the Netherlands will be contesting the world championships with the entry list reading like the who is who of Olympic Finn sailing and with many Northern Hemisphere sailors making the most of their opportunity to train and race in Australia’s warmer weather in the lead up to the Tokyo 2020 Games and race for world champion glory at the same time.

“It is pretty cool to have the Finn Gold Cup held in home waters, Port Phillip Bay is a great venue to sail in and will provide a wide array of conditions for us.  A lot of the international sailors spent time here last summer too, so I'm looking forward to a good training block prior to the worlds,” Tweddell said. “Most of the international teams have arrived and the full Australian Team and our training camp started a couple of weeks ago. With everyone here we will have a good few weeks of training ahead of the Worlds.”

The 2019 Finn Gold Cup will also be the celebration of Tweddell’s comeback to international sailing competition following a difficult break of his wrist earlier in the year which kept him off the water for several months.

“The Finn Gold Cup will be my first competition back since my injury, with my last competition being the Nationals in January. My recovery from surgery has been extremely slow, and quite frustrating.  I only received full medical clearance in August, so have been building myself back up from there, but I am very excited to get racing again,” Tweddell said about his path to recovery.

“While this is most definitely not my ideal preparation for the Gold Cup, it is the situation I am in and I will make the best of it.  I am nice and fresh mentally and extremely eager to get racing again, with zero expectations other than to sail the best I can and give it my all,” the Victorian Institute of Sport sailor said.

Nevertheless, the 29-year old has not lost sight of his ultimate dream to secure Australia a quota spot for the Tokyo 2020 Games and gain Australian selection with the Finn Gold Cup the final Oceania qualifying event for Tokyo 2020.

“The Olympics have always been a goal of mine, and I see no reason why another setback would change that goal.  It certainly makes the road there a lot harder, but it has also helped me develop more as an athlete and look at the goal from a different perspective, especially given I have been sat in a coach boat for three months coaching at the major Finn events this season. This different perspective has taught me a lot of lessons which I will use during the Gold Cup.”

Tweddell will not only be up against the world’s best sailors for world championship glory but also against his Australian team mates, including Rio 2016 Olympian Jake Lilley (QLD), who also have their eyes set on Tokyo 2020.

The Finn Gold Cup will be the start to an exciting Melbourne Summer of Sailing 2020 (SOS 2020), which will see a series of world-class sailing events, including Sail Melbourne International in January and several Olympic class world championships hosted on Port Phillip from December through to March next year.

“It is going to be a great summer of sailing in Australia, with the Finns at Brighton, the Laser Standards and Laser Radials at Sandringham, the Skiffs (49er/49erFX) and Nacras (foiling catamaran) in Geelong and the RS:X’s (windsurfer) in Sorrento,” Tweddell said.

Melbourne’s Summer of Sailing 2020 will be a great opportunity for Australia’s sailors to mix it up with the best sailors in the world on home waters as well as for the Australian public to see the world’s best and Australia’s Olympic aspirants in action at their doorsteps.

“Anyone that is interested in sailing should try and check out the world class sailors coming to Melbourne to put their skills on show. Specifically, for the Australian Finn sailors this could be the last time the Finn Gold Cup is in Australia as an Olympic class, so you should definitely not miss the opportunity to race against some of the legends in not only the class but the sport too,” Tweddell called for spectators and sailors to join in the SOS 2020 action.

Most of the Australian and international Finn sailors will make the most of the racing opportunities over the next couple of weeks and will also contest the ‘Go For Gold Regatta’ at Black Rock Yacht Club this weekend (30 Nov-1 December 2019) as well as the pre-event, the ‘George Mac Regatta’, at Royal Brighton Yacht Club next week (7-8 December 2019).

In addition, many of the Finn sailors from around the country and the world are expected to continue training in Australia until the Sail Melbourne International Regatta at Royal Brighton Yacht Club in January.

Other Olympic class sailors have also started to arrive in Victoria and will be preparing in and around Melbourne for their class World Championships to follow in February and March.