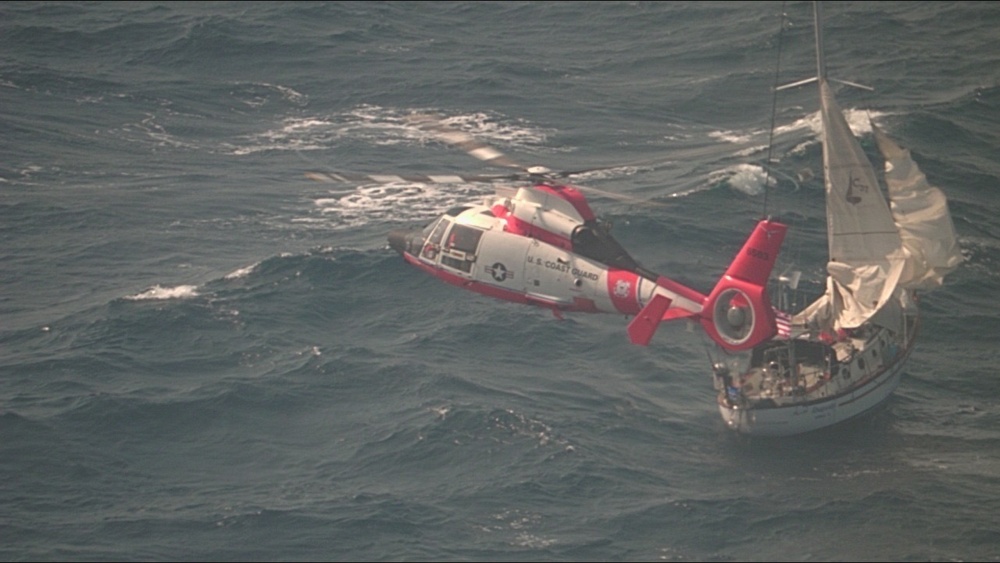 Once on scene, the LPG tanker Sahara Gas reported two people aboard a 37-foot sailing vessel disabled after an engine room fire. The tanker was unable to lower a life boat to render assistance due to 10-foot seas.

The air crew of the HC-144 Ocean Sentry arrived on scene and established a communications schedule with the two mariners aboard the Rhapsody.

At 12:42 p.m., the MH-65 helicopter crew hoisted the two mariners and transferred them to Air Station Houston.

“The success of this rescue was heavily reliant on our strong partnerships,” said Petty Officer 1st Class Ra Wilkinson, an operations specialist at the Eighth Coast Guard District command center. “From the good Samaritan LPG tanker Sahara Gas who remained on scene with the vessel, to the offshore platforms that supported the refueling of our MH-65 throughout the journey, to the multiple Coast Guard units involved, we were stronger together and two mariners are out of danger because of it.”

In another incident, the Coast Guard assisted a man aboard a sailing vessel beset by weather offshore Destin, Florida, Thursday.

Watchstanders at Coast Guard Sector Mobile, Alabama, received a report at 10:25 a.m. of a sailing vessel stuck at anchor with one person aboard in the Gulf of Mexico approximately 1 mile offshore Destin.

Sector watchstanders directed the launch of a 45-foot Response Boat-Medium crew from Coast Guard Station Destin to assist the man.

The boatcrew arrived on-scene at 11:29 a.m. and transported the man safely to shore