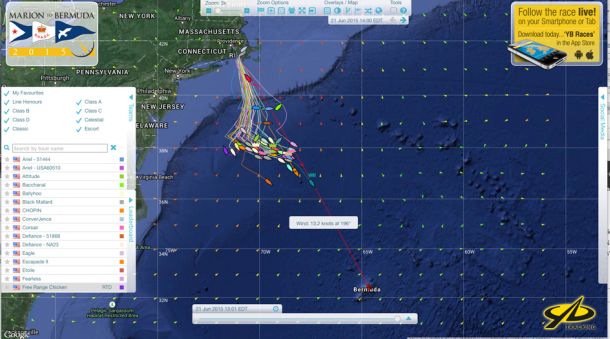 En Route to Bermuda- June 21, 2015: Happy Fathers Day to the Fathers in the race and Sweet Solstice Sailing to all. Marion Bermuda 2015… what could be better, as John Masefield wrote, than “a tall ship and a star to sail her by And the wheel’s kick and the wind’s song and the white sail’s shaking, And a grey mist on the sea’s face, and a grey dawn breaking.”

The race is on with the leaders covering some 365 miles down the line to Bermuda. Forty-five boats set out on their way to Bermuda in the 2015 Marion to Bermuda Race at mid-day Friday, June 19. Two boats have since retired by morning June 21. ‘Free Range Chicken’, a Class A Perry 59 skippered by Bruce Anderson, broke a shroud and withdrew for the US east coast. ‘Is Fearr Cara’, an Island Packet 380 in Class D and one of the ‘slowest’ rated boats, retired earlier for “unknown reasons” and is heading north for the coast as well.

The winds in the area where “Free Range Chicken’ broke the shroud were up to 30kts and seemed to be sustained in the low 20’s. They were also near the north wall of the Gulf Stream and were probably in fairly rough seas.

At the 1500hrs update, ‘Mischievous’, the scratch (fastest) boat in the fleet was still leading the race for line honors. She was smack dab on the 164º rhumb line from Marion to Bermuda steering 152º and making 7.9kts VMG to Bermuda. Since morning reports Sunday, her ETA at St. David’s Lighthouse had been cut from 0530 on Tuesday morning to 0314hrs Tuesday. Did she get a boost from the Gulf Stream or a lift from the wind? We will have to wait dock talk and the Navigator’s Forum in Bermuda to learn the details.

‘Lucy Georgiana’, an X-Yacht Xp44 skippered by Peter Bacon, has taken over second place in the hunt for line honors. But she is still 57 miles behind ‘Mischievous’.

‘Spirit of Bermuda’, the Bermuda Sloop Foundation’s sail training vessel chartered by Jim Butterfield, was in a strong position compared to past Marion Bermuda Races. Skipper Stuart Birnie took the 118-foot Bermuda sloop well to the west before heading south back toward the rhumb line. At 1500hrs she was making 8.4 kts, steering 129º and 380 miles from Bermuda

On Sunday, what’s left of Tropical Depression Bill was predicted to pass into the Atlantic in the afternoon and evening. Winds in the Gulf Stream are expected to be fresh, up to 30 knots, and the seas should build to over three meters. Winds should be shifting through the south and end up out of the southwest Sunday night. By Tuesday, winds 75% down the course where most of the fleet should be are predicted to be westerly and then back more to the southwest.

For a look at wind and current predictions, go to www/passageweather.com and click on the Marion Bermuda race link.