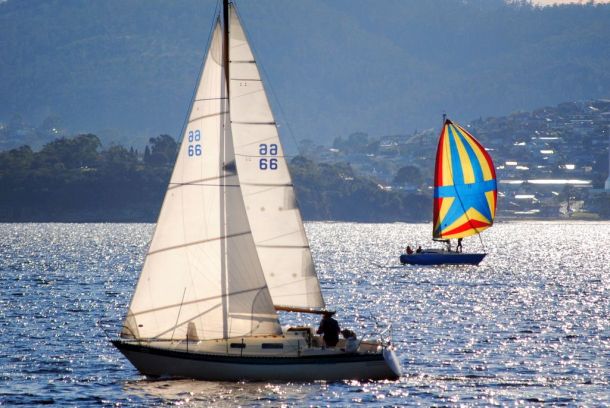 Kirkland, who has been racing yachts on the Derwent for almost 60 years, won the opening race in Division 3 of the DSS Winter Series in late May and repeated that performance today on the second day of racing.

Last Sunday, Ragtime won the opening race in the Royal Yacht Club of Tasmania’s Winter Series, the club where Kirkland has been a member since 1958.

The retired medico races Ragtime in the winter races run by the DSS and the RYCT and also competes in the Combined Clubs summer pennant racing.

The Winter Solstice was certainly here today, with the Hobart’s temperature during the morning race ranging from just 5-9º C with a 7-10 knot NW breeze coming off the snow-capped Mount Wellington. The sun rose at 7.42am and set at 4.43 pm, making it Hobart’s shortest day of sunlight, but at least it was sunny throughout.

With a steady breeze on the eastern shore of the Derwent, the DSS ran three windward/leeward races for the SB20 winter series, producing three different one-design winners and three different PHS handicap winners.

Scott Brain was the third one-design winner of the day, beating Anonymous across the line by 16 seconds, with one second to Hypertronics. Realemedia won the race on handicap from Pez (Hunt Gore) and Brainwave.