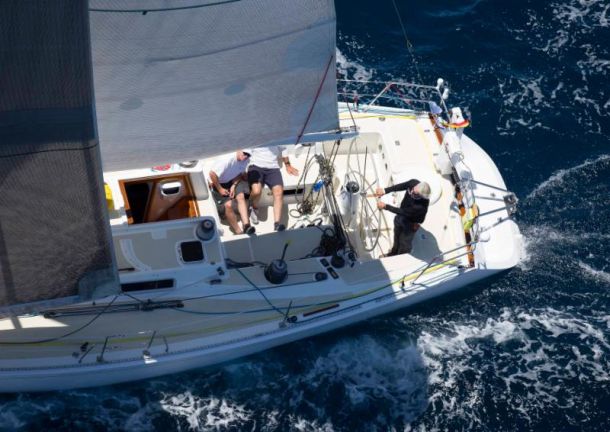 San Pedro, CA – The first wave of 22 entries in Divisions 7 and 8 have had a great 48 hour start to their race from LA to Honolulu in the 48th edition of the Transpac. The class leaders have traversed nearly 500 miles, almost one-fourth the distance to the finish in this 2225-mile biennial ocean racing classic, organized by the Transpacific YC.

Leading the pack in both elapsed and corrected time is Tracy Obert's Marjorie, a gorgeous Stephens Waring-designed 59-foot ketch built in cold-molded wood and Kevlar at Brooklin Boat Yard in Maine in 2007. Despite having a traditional interior made of oak and mahogany, the use of contemporary materials (such as carbon fiber spars) and modern design shapes below the waterline are producing the fast speeds she's now enjoying towards Hawaii.

The current leader in Division 7 is Paul Stemler's J/44 Patriot, who has not sagged too far south off the rhumbline course to the finish like many of the others, and is thus minimizing the distance to Diamond Head.

An early leader in the race was the Jorgensen Brothers's J/133 Picante, but they decided to retire from the race and turn back to Long Beach, saying they were abandoning the race for having loose keel bolts. Similarly, Robert Yearsley's Jeanneau 49DS Vivacia sent a terse message on Tuesday morning that said simply “returning to Rainbow Harbor. taking on water from deck level. Request dock assignment.” Fortunately, neither crew had any injuries nor needed any assistance to return, and both are back now in Long Beach.

Other comments from the race course varied by size of the boat: the rough close reach sailing in 15-20 knots of wind in big seas meant only terse messages from the smaller boats, like “All is well,” to more eloquent passages from the larger boats, who had a little more comfort to compose messages, like this one from Marjorie: “Marjorie is named after owner, Gardner Baldwin's Mother. Her birthday was July 13, 1915 exactly 100 years before Monday's start in which the boat named after her started her first Transpac. Marjorie Baldwin has passed but on the occasion of her birthday seems a fitting tribute and one which warrants mentioning.”

Another team dropping from the scratch sheet is doing so before even starting.

Renaud Laplanche and Ryan Breymaier co-skippers of Maxi trimaran Lending Club 2 have made the decision to withdraw and instead leave Long Beach today to attempt the outright Transpac record, currently held by Olivier de Kersauson onboard Geronimo.

According to the team, “Lending Club 2 had entered the 2015 Transpac race with the intention of beating the race record that stands at 5 days 9 hours and 20 minutes. The co-skipper team attempted this feat in the 2013 Transpac but were hindered by debris as large as tree trunks and telephone poles thought to be left by the Japanese tsunami and arrived in Hawaii just two hours outside the record.

“For the past week Renaud and Ryan, along with navigator Boris Herrmann have been carefully watching the weather and concluded the weather window for the race start will not offer the right conditions for a fast race. At the same time they noted a low pressure system offering ideal conditions for an extremely fast crossing if the boat were to leave immediately.

“We wish fair sailing to our Transpac friends, rest assured we will be back to race this legendary race.”

But no one has dropped from the roster in tomorrow's second race start at 13:00 PDT from the list of six mostly fast 40-ish footers in Division 4, the nine Santa Cruz 50's and Santa Cruz 52's in Division 5 (the so-called “Fabulous Fifties”), and the four slightly slower and older racer/cruisers in Division 6.

The Euro model forecast for Thursday looks promising to get off the coast, but then changes may be ahead

Their weather forecast looks good for their initial exit off the coast, but in slightly less pressure than the first wave due to an approaching low pressure center from the south later in the week.

All boats have GPS trackers provided by Yellowbrick, where the boat's position, speed and heading will be continuously reported on the Yellowbrick website, with a 6 hour delay in the reports viewable at http://yb.tl/transpac2015. Official 0600 PDT position reports are reported by 0700 PDT each day, and about an hour later will be collated and ready for posting.

There will also be blogs sent from the boats posted on the TPYC home page, and lots of photos and stories available on the Transpac Facebook page. Photos from the starts, finishes and other official events from Sharon Green and her team at Ultimate Sailing are also displayed in the Media section of the Transpac website.