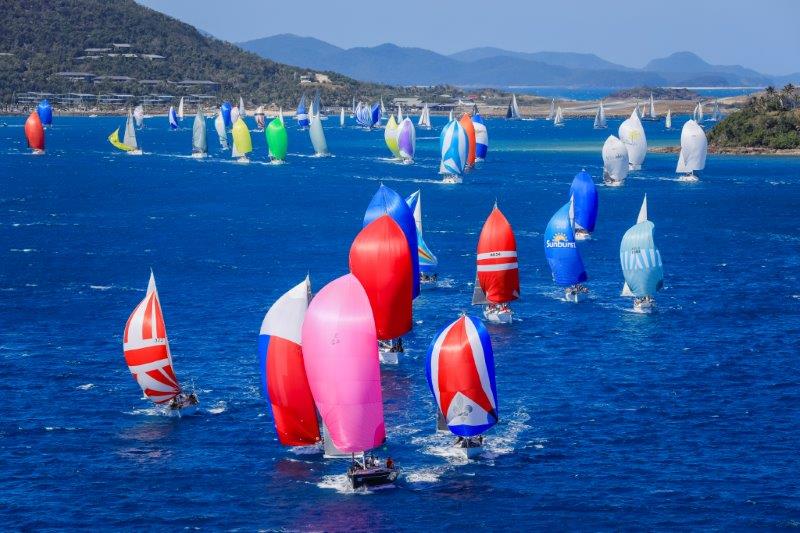 Two of Australia’s fastest men on water; maritime marvels who have been quite comfortable while travelling at more than 130 knots, will go head-to-head in August at Australia’s premier yachting regatta, Hamilton Island Race Week.

This time, though, their circumstances will be far more sedate. Instead of hearing the deep-throated roar of an immensely powerful V-8 engine that propels their respective offshore racing powerboats at mind-boggling speeds, they will be thriving on a different form of excitement.

This high-profile pair will be aboard their respective thoroughbred ocean racing yachts at Race Week and going for glory against some of Australia’s best yachts and crews.

Both are Queenslanders; Bill Barry-Cotter pioneered the design, construction and marketing of two of the world’s best-known luxury motor yacht brands, Riviera, and more recently Maritimo, while the always flamboyant Stefan Ackerie is recognised as being the long-time “King” of women’s hairdressing via a chain of salons across Queensland. Consequently, he is often referred to as ‘The Barber of Boating’.

The common denominator between the pair is that both have been very competitive and high profile in the world of offshore powerboat racing. Now though, that will change at Race Week, which will be staged on courses around the beautiful islands of the tropical Whitsunday region from August 21 – 28.

Ackerie is a relative newcomer to sailboat racing, whereas Barry-Cotter can lay claim to having won the Three-Quarter Ton Cup class Australian championship some years ago with his yacht Ghost.

For Hamilton Island Race Week, Barry-Cotter will be aboard his latest acquisition, the 17m long sloop, Maritimo, which he purchased in America more than a year ago and subsequently did a complete rebuild at his boating facility on the Gold Coast, near Brisbane.

Its name has been changed to ‘Stefan’ for Race Week, and it won’t be difficult to spot. The word is emblazoned on each side of the hull in rainbow colours.

Hamilton Island Race Week has an impressive history. It was established following Australia’s historic victory in the America’s Cup in Newport Rhode Island, in 1983. The inaugural regatta, staged in April 1984, attracted an outstanding fleet of 92 yachts which came from all points across Australia, including Perth. This year’s fleet has been capped at a record 260 entries.

The Notice of Race and all details relating to Hamilton Island Race Week 2021 are on the website:http://www.hamiltonislandraceweek.com.au/