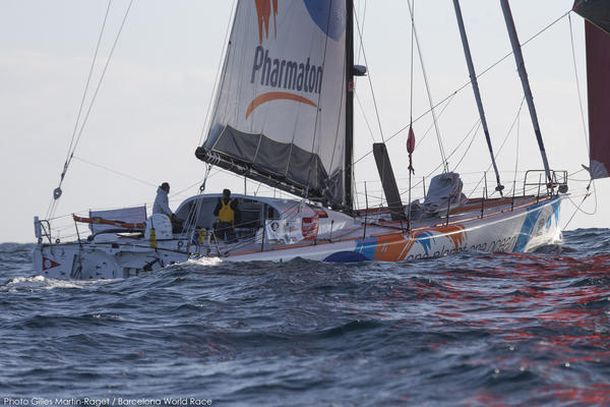 There are fewer than 500 miles to the finish for One Planet One Ocean & Pharmaton, but the challenges of the Barcelona World Race are not quite over yet. Aleix Gelabert and Didac Costa crossed into the Mediterranean Sea last night, passing the latitude of Tarifa (5°37°W) at 18h25 UTC (20h25 BCN). The fourth team to return to the Med, Gelabert and  Costa arrived back in their home waters 95 days, 6 hours and 25 minutes after leaving Barcelona on December 31, 2014.

Conditions in the Straits of Gibraltar were favourable for the fourth placed boat, with 7-8 knots westerlies and an east-going current, which saw the pair gybing frequently as they passed the tip of Southern Europe. However, as One Planet One Ocean & Pharmaton sailed deeper into the Alboran Sea they were this afternoon faced with 20-knot headwinds. Their shore crew has reported that the easterly Levante wind is currently blowing 25-31 knots, and the team are tacking along the Spanish shoreline as conditions are lighter closer to the coast. They are also experiencing large swells, making headway slower going than the routing predicted, which had suggested an arrival time in Barcelona of the afternoon of Wednesday, April 8.

Bruno and Willy Garcia also passed into the Mediterranean this morning, Monday April 6th, at 0414UTC after 95 days, 16 hours and 14 minutes of racing. Around 25 miles south of Malaga, We Are Water is also now experiencing 20-25 knot easterlies. Their average boat speed remains consistently 0.5-1 knot faster than One Planet One Ocean & Pharmaton, and We Are Water gained 17 miles on their rivals in the past 24 hours. Passing lanes on a lumpy beat to Barcelona may be limited, but both duelling contenders will be fighting to the finish.

Renault Captur has also passed the 2,000-mile to the finish mark. Sébastien Audi gane spoke earlier by video conference, reporting that they had just completed what they expected to be one of their final tacks of the race. “We are on the south-east edge of the Azores high. We tacked earlier, about two or three hours ago, and it was probably one of our last tacks. In any case I think we have done the last tack before Gibraltar, now we have a very long way until Gibraltar on the same tack, for three days. We have between 15 and 20 knots of wind, and we’re sailing between 9.5 and 10 knots.”

The Renault Captur duo continue to sail their race almost alone in sixth, now 1,400 miles from Gibraltar – having taken by far the most westerly return course up the Atlantic of any team – with Spirit of Hungary another 1,100 miles to the south. Whilst One Planet One Ocean & Pharmaton and We Are Water will no doubt be exhausted by the relentless pressure of their trans-Ocean head-to-head battle, Sébastien Audigane and Jörg Riechers are instead feeling the draining tiredness of motivating themselves continually with no near opposition. “We are a bit tired, mainly mentally because we have no competitors to play with,” reported Audigane today. “Physically we are fine, we’re sleeping well because we don’t have a lot to do on board, apart from making the boat sail fast upwind, which is not very complicated.

“Although we have had some problems, we have crossed a 600 mile area of seaweed – which gets stuck into the appendages – we have had an electrical breakage, and now we have a problem with the engine to charge the batteries, but I think we are going to solve it during the day.” They have sufficient food despite having initially provisioned for 92 days with a few days margin of error, although Audigane did report that they are running critically low on coffee and sweets.

Back to the beat

For seventh placed Spirit of Hungary conditions have settled on a long starboard tack in established north-easterly trade winds, around 180 miles south and 400 miles to the west of the Cape Verde islands. As they approach this landmark of the North Atlantic, Nandor Fa and Conrad Colman are – finally – allowing themselves to imagine arriving back in Barcelona.

“The Cape Verde islands are the gateway to the Doldrums on the outbound leg so now that we approach their latitude heading north we can finally let our thoughts turn to the finish,” blogged Conrad Colman today. “We’ll be beside them tomorrow and then it’s a matter of linking up the Canary Islands with Madeira, Madeira with the approach to Gibraltar and then the final wriggle to the finish. After our protracted escape from the Med last time, I’m certainly not confusing Gibraltar with the finish line but after the tens of thousands of miles already sailed it feels like we’ll be able to smell the finish line whe n we pass the famous rock.”

In the meantime, however, they have more prosaic concerns, namely contending with the flying fish which land onboard Spirit of Hungary: “I got pegged in the back by one of these foul smelling winged missiles last night when I was checking the sail trim. We generally try to help them back into the water but several don’t make it back as we either don’t find them fast enough or they are knocked stone cold by their initial impact that there’s little to do for them. I for one am not going to risk smelling like the Tokyo fish market by attempting mouth to mouth with a dizzy fish with a death wish!”