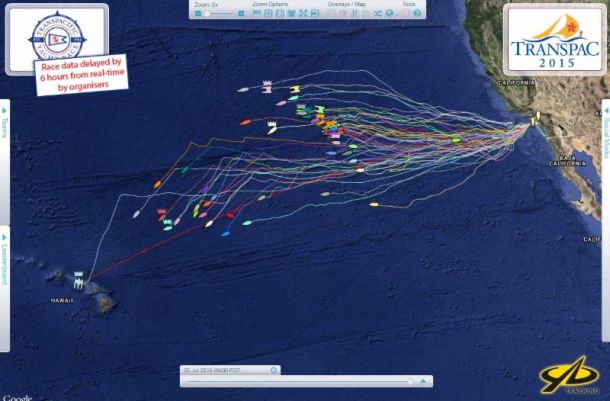 San Pedro, CA – The three fleets defined by their start days started to converge into two over the past two days in the 48th running of the LA-Honolulu Transpac. This biennial 2225-mile classic ocean race is organized by the Transpacific YC.

Most of the first wave of starters continue to enjoy conditions that while punctuated by occasional squalls are still getting them downwind and towards Hawaii at a reasonable pace. Current elapsed time leader of this pack is Harry Zanville's Division 7 Santa Cruz 37 Celerity, who on the tracker (delayed by 6 hours) is shown to be only 425 miles to the finish. At about 200 miles/day they are therefore expected sometime on Friday morning.

The leader of Division 7 in corrected time, however, continues to be Paul Stemler's J/44 Patriot, who is just inside 500 miles to go. Close by at 505 miles to go is Tracy Obert's Division 8 leader Majorie, a 59-foot BBY ketch.

Syd Fisher's Ragamuffin 100 in Division 1 continued a northward trajectory that has them sailing a lot of extra distance on the hunt for more breeze on the south side of the Pacific High. At about 1150 miles to go, Rags's rival 100-footer Wild Oats XI – co-skippered by Roy Pat Disney and Mark Richards – was positioned closer to the rhumb line and had only 1070 miles to go, with both doing nearly 20 knots, some of their best speeds yet. And not far behind is Manouch Moshayedi's Rio 100, a fixed-keel design from Blakewell-White, that with 1140 miles to go has them as the corrected time leader in this class.

In general, most of the other Division 2 and 3 boats as well as the multihulls have overtaken the second wave starters in Divisions 4, 5 and 6, with them all lined up on the tracker like horses in a north-south starting gate facing west. Those to the south close to rhumb line have sailed less distance, but have also encountered lighter winds than those to the north and south.

Besides the atypical weather in this year's Transpac, another element that is starting to appear for everyone is more disturbing: floating debris. Many boats are reporting sightings of floating objects of many varied types and sizes. A report today from Bob Pethwick's Rogers 46 Bretwalda 3 is typical: “Lots of debris in the water such as nets and rope.”

“This race has been the trickiest ever,” said Wild Oats's Disney, a veteran of 20 Transpacs. “The winds have been unbelievably fickle, but making the situation even more demanding now is this massive field of debris we've sailed into. We are seeing at least three bits on junk every minute – timber, fishing nets, plastic, poles that have broken away from commercial fishing nets; you name it, and it's probably here.

“It's so bad that we have a man stationed permanently on the foredeck to alert the helmsman of anything we might hit. That's our problem right now, but it will be even tougher when it's dark.”

This problem of the debris in the North Pacific has prompted a major project based in the Netherlands that is pledged to help clean up this trash: The Ocean Cleanup. Partnering with Transpac 2015, The Ocean Cleanup has organized a major data collecting exercise called The Mega Expedition, where Transpac boats heading back to the mainland after the race will proceed along transit lanes aligned on lines of latitude and record what they see, as well as take samples. This is being described as the largest scientific experiment in history, since it will involve 36 boats returning to Califiornia, and hundreds of participants on the project.

The large area of light air that has been parked in the middle of the course area for nearly a week has forced the second and third wave starters to do some evasive navigation, with some opting to around this patch to the north while others try south. In general the north has been paying off, although some entries have taken this to an extreme.

The Ocean Cleanup will use this data to help design its floating boom apparatus that will help collect the trash for later disposal. For more information about this fascinating and ambitious project, visit www.theoceancleanup.com/technology/mega-expedition.

Regardless of debris, in the next day or two the large wind hole that has holding the fleet back is expected to fill in with the normal tradewinds, and should promise a fast finish into the islands for all the starting groups.

All boats have GPS trackers provided by Yellowbrick, where the boat's position, speed and heading will be continuously reported on the Yellowbrick website, with a 6 hour delay in the reports viewable at http://yb.tl/transpac2015.