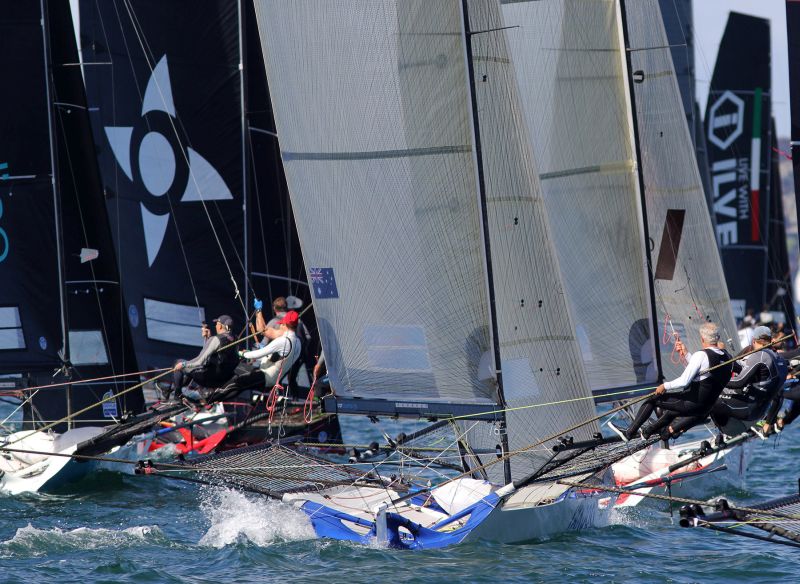 09/11/2020
The two races (Races 5 and 6) of the Spring 18ft Skiff Championship were sailed in a light South East breeze on Sydney Harbour today and produced two different winners from the 'red group' under the Australian 18 Footers League's unique 3-buoys handicap system.
In the first of the two races, Bird & Bear (Tom Clout, Tom Anderson and John Walton) took line honours by 1m41s from Yandoo (John Winning, Jasper Warren and Mike Kennedy) after the pair had staged and closely-fought battle over the first lap of the two-lap windward-return course.
Vintec, sailed by the rookie team of Tom Cunich, Alex Marinelli and Flynn Twomey, were consistently in the leading group throughout the race and finished in third place, 17s behind Yandoo. Smeg (Michael Coxon), Rag & Famish Hotel (Anthony Young) and Noakesailing (Sean Langman) completed the top six.
The later race began in a similar fashion with Yandoo and Bird & Bear prominently placed as a result of the 3-buoys system, but a wind change as the fleet raced to the finish line dramatically turned the race on its head.
Vintec had trailed Bird & Bear and Yandoo as the teams set their spinnakers for the run to the finish line but the young team took full advantage of the wind change to come from behind and grab its first win in the 18s.
With the fleet steaming home with lm41s among the first thirteen boats, Vintec crossed the finish line just 4s ahead of The Kitchen Maker-Caesarstone (Jordan Girdis, Lachlan Doyle and Tom Quigley), with Bird & Bear finishing just another 5s back in third place.
Birkenhead Point Marina (Tim Westwood) finished in fourth place ahead of Winning Group (Micah Lane) and Finport Finance (Harry Price).
Yandoo lost out badly with the wind change and finished in seventh place but her performance over the two races has Yandoo leading the championship by three points going into next Sunday's final race.
Yandoo has a total of 27 points, followed by the previous leader tech2 (Jack Macartney) on 30, Smeg on 39, Winning Group (John Winning Jr.) on 43, Bird & Bear on 45 and Finport Finance (Keagan York) on 54.
Bird & Bear was particularly impressive in Race 5 as she raced away from the fleet over the second lap of the course.
The team led narrowly from Yandoo over the first lap, but the following windward leg across the harbour from Taylor Bay to Rose Bay was sensational as the team extended the lead to 50s for the run home.
Yandoo took early control of Race 6 and was a clear leader at the end of the first lap before Finport Finance and Bird & Bear reduced the margin to just a few seconds as the group approached the Rose Bay markers.
Finport Finance actually took the lead but, under the handicap system, had to travel further to the 'white' mark, leaving Yandoo and Bird & Bear to head first for home.
Last week's 25-30 knot southerly winds were a distant memory as the fleet this week battled the very light conditions, but it was important as it gave the newer teams the opportunity to sharpen their teamwork.
Race 7 (final race) of the Spring Championship will be conducted next Sunday, November 15.
Spectators can follow the racing on board the club's spectator ferry, however due to the COVID-19 policy, numbers are limited. Booking online through the club's website www.18footers.com is essential. https://www.18footers.com.au/18-footers-sailing/spectator-ferry/
For those unable to make it out onto the water, AeroMedia Live Broadcast team will be on Sydney Harbour to capture all the action.  Live streaming is available at www.18footers.com by clicking on the '18 Footers TV' link.
– Frank Quealey, Australian 18 Footers League