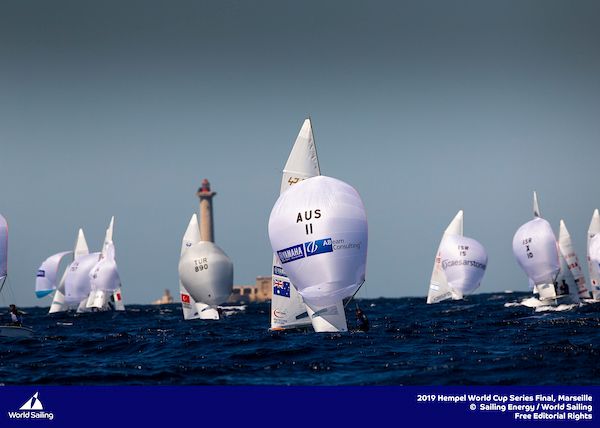 Mattia Camboni (ITA) and Lilian de Geus (NED) hold top spot in the Men’s and Women’s RS:X as the battles heat up at the Hempel World Cup Series Final in Marseille, France.

After Wednesday’s blowout, the sailors racing across the ten Olympic events and Open Kiteboarding were eager to get back to what they do best – sailing as hard and as fast as possible in a bid for glory.

A full schedule of racing was completed and the leaderboards are shaping up nicely ahead of Saturday and Sunday’s Medal Races which will be live on World Sailing’s YouTube channel – www.youtube.com/worldsailingtv.

Italy’s Camboni controlled the Men’s RS:X fleet on the opening day, claiming two race victories and a second. No racing was possible on Wednesday but in three further races on Thursday, sailed in a variable 10-15 knot breeze that veered from the west to south west, he continued to impress.

A third race victory was backed up with a second and a ninth, which he discards. “I’ve had two really good days,” expressed the young Italian. “One day was perfect and today could have been perfect if it wasn’t for my last race. I had a really bad start. I had to tack in the middle of the course and it was hard to get back. I also made a few mistakes but the other races were good. It could have been worse.

“I have a good feeling with my equipment, even though it’s a little bit old. I’m feeling fast and we had a lot of good days in Lake Garda training in similar conditions. I have no stress and the luck seems to be with me. I hope it’s like this for the remaining days.”

Camboni has opened up an eight point advantage over Poland’s Piotr Myszka and is a further two points clear of compatriot Daniele Benedetti.

Alongside the fight for the 2019 Hempel World Cup Series Men’s RS:X title, Camboni also has the added pressure of trying to qualify himself to August’s READY STEADY TOKYO – Sailing, the Olympic test event.

“This is an important competition because it’s the World Cup Final. It would be nice to get the medal because I’m working so hard. This event is also qualification for the test event. We had the World Cup in Miami and this is the last event. Daniele and I are really close,” concluded Camboni.

Claiming the Hempel World Cup Series title would go a long way in Camboni demonstrating he has what it takes to succeed at the highest level.

The Netherlands’ de Geus is racing in Marseille without the pressure that is bestowed on many of her rivals. De Geus has already qualified for Tokyo 2020 and will compete at her second Olympic Games next Summer.

Sailing without the added stress off fighting a national rival or qualifying the country, having done that at the first time of asking, is paying off. She advanced to first overall on Thursday following a 6-6-1 scoreline.

“It was amazing conditions today,” commented de Geus. “This morning we went out and we had no breeze. We waited a bit and it’s good we waited because we had some really nice breeze after that. The races were amazing.

“There are a lot of good sailors here. It’s a good battle every day. You’ve got to battle and work hard for everything and I’m happy I managed to get that final race win.”

De Geus finished fourth at Rio 2016, her first Olympic Games, missing out on a medal by a single point. With the pain of missing out still evident, she knows what she has to do to ensure she doesn’t lose out again, “Ahead of Tokyo 2020, I’ve got to keep going on the pathway I’m going, taking steps forward every day. If I do that then I have a good chance of taking a medal at Tokyo.”

Saskia Sills (GBR) secured a 7-3-3 scoreline and is two points off de Geus in second. Flavia Tartaglini (ITA) is third.

A real battle is developing between Kiwi teammates Andy Maloney and Josh Junior in the Finn.

Between them, the pair have won every single race. Junior has three of the five victories but finds himself a point behind Maloney, the leader. Junior’s discard is higher than Maloney’s and he counts a fourth following a scoring penalty in Race 4 that saw him pick up a maximum 13 points for the race.

The fight will continue on Friday as they bid to extend their advantage over Max Salminen (SWE) who is third, eight points off.

After watching their teammates Ruggero Tita and Caterina Banti (ITA) win gold at the 2018 World Cup Series Final, Italy’s Vittorio Bissaro and Maelle Frascari are fighting hard for glory in the 24-boat fleet.

Bissaro and Frascari have sailed sublimely and from four races, sailed their way to a 2-5-2-1 scoreline. That has enabled them to open up their lead over John Gimson and Anna Burnet (GBR).

After winning the single 49er race in strong breeze the day prior, Spanish brothers, Federico and Arturo Alonso completely dominated the four fleet races on Thursday.

The Spaniards won the first three races and concluded the day with a second. As a result they have opened up a 21-point advantage over Benjamin Bildstein and David Hussl (AUT). Overnight leaders Kévin Fischer and Yann Jauvin (FRA) were penalised in the first race of the day and raced in the middle to lower end of the fleet. High scores have pushed them down to fourth.

Julie Bossard and Aude Compan (FRA) shone in the 49erFX. Two race wins, a second and a third, positions them at the top of the pack, ten points clear of Aleksandra Melzacka and Kinga Loboda (POL).

Australia’s Mat Belcher and Will Ryan look well acclimatised to the Marseillaise waters after another outstanding day. Two bullets and a second has allowed them to leapfrog Jordi Xammar and Nicolás Rodriguez (ESP) into first overall.

The Spaniards had led from day one but they could not match the Australians consistency to maintain it. They are still in the hunt, seven points off, and with four fleet races remaining know they can move back into pole position.

France’s Camille Lecointre and Aloise Retornaz clinched two race wins and a fourth to move into medal contention in the Women’s 470. The pair were ninth heading into Thursday’s sailing but now sit second thanks to their work on the water.

In the Laser, the race victories continue to be shared with three separate winners from the day’s races. They went to Zan Luka Zelko (SLO), in fifth, Agustin Vidal (ARG) in sixth and the third placed Adonis Bougiouris (GRE). Ryan Lo (SGP) holds the lead on 12 points followed by Giovanni Coccoluto (ITA) on 15.

Lithuania’s Viktorija Andrulyte maintained her consistency in the Laser Radial with a 1-2-2 scoreline to open up a nine point advantage over Elena Vorobeva (CRO) and Tatiana Drozdovskaya (BLR). The points are close at the top of the fleet with Carolina Albano (ITA), Silvia Zennaro (ITA) and Yumiko Tombe (JPN) within striking distance of the podium.

Racing is scheduled to start at the earlier time of 10:00 on Friday 7 June. The forecast is for strong gusts in the afternoon and the race management team will aim to make the most of the 15-19 knot morning breeze.