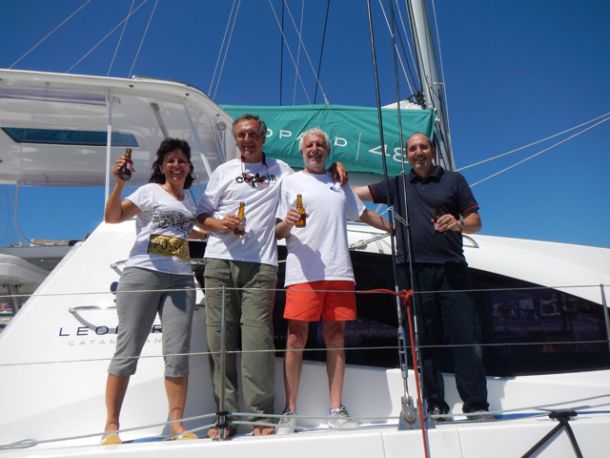 27/06/2015
This week, two World Cruising Club rallies converged on Marina de Lagos in southern Portugal marking the end of their multi-leg journeys to the Algarve. ARC Europe began six weeks ago in Nanny Cay, Tortola and Portsmouth, Virginia and the fleet has completed their west to east transatlantic adventure experiencing the island havens of Bermuda and the Azores en route. Arriving just a few days later, after three weeks of sailing from Plymouth, UK and exploring the Portuguese coast, the 21st edition of ARC Portugal was also welcomed at Marina de Lagos. Having sailed over 900 nautical miles and visiting eight different ports, their arrival followed “the best sailing day of the rally” was a fitting way to end the cruise.

“It's always a pleasure to welcome the rally fleets to Marina de Lagos,” said Ingrid Fortunato from  Marina de Lagos. “When meeting each arrival, the friendships and support that have formed during their time sailing together on the rally is nice to see.” For over two decades, Ingrid and her friendly staff have received World Cruising Club rally yachts, as Managing Director Andrew Bishop explains, “Marina de Lagos opened for business in 1994, and their invitation to start a sailing event to attract UK customers the port, resulted in the launch of our rally along the coast of Portugal in 1995; we later added the marina as the final destination for ARC Europe, attracting more yachts to this first class full service marina. This year we celebrate 21 years of sponsorship, with continuing support for both ARC Portugal and ARC Europe, with generous discounts for visiting ARC yachts heading south to Gran Canaria. Marina de Lagos, and the services associated with the marina have grown and developed, as has World Cruising Club with more events and entries. It's a great relationship, of which we are both proud.“

The ARC Europe Prize Giving, held on Sunday 21 June, celebrated the official end of the transtlantic rally. Having brought together a fleet of 40 yachts, from the two starts in Nanny Cay BVI, and Portsmouth USA, plus some joining the rally in Bermuda, to cross the Atlantic to the Azores, it was not surprising that there was a starburst of routes taken with yachts heading to achieve their own cruising objectives. The fleet split in two principle directions with half returning to northern Europe whilst the remaining 20 yachts headed to Marina de Lagos, where the rally officially ended. At the dinner, prizes were awarded not only for sailing achievements within the Cruising Division providing fun competition for the fleet, but also prizes recognising crews for best blog from sea, best fish and best Torrero (bull fighter!) were presented. The biggest cheer went to the winners of the Spirit of the ARC Award – Bikini.

ARC Portugal similarly came to an end with a farewell dinner, prize giving and entertaining presentation that reminded the fleet of all they had achieved and experienced over the last three weeks. “It has been a challenging experience” admitted Paul Dodson, sailing on Attachment (GBR) a Jeanneau Sun Odyssey 45.2, “But sailing with ARC Portugal increases your confidence in boat and crew sailing skills. I highly recommend it and the YB Trackers were great for family to follow our progress at home.”

Whist both routes have visited some magnificent ports en route, and enjoyed great sailing, it is the friendships formed that rally participants were quick to praise about their experience. “Sailing is fun, and big ocean crossings are as well. But sailing with other people is more fun!” said Yana and Henrik Augustsson who completed their second Atlantic crossing with ARC Europe on board Song of the Sea (SWE) a Najad 460. “ARC Europe has been a great way of getting to Europe safely and to get to know a lot of wonderful people.“

Looking ahead, boats in each fleet have different onward plans for the summer; some will use Marina de Lagos as a base for their boats which is aided by the easy flight connections, whilst others will venture into the Mediterranean, or return to their home ports. Peter and Nicky Harvey from ARC Portugal yacht Chanto have their sights set on many more miles on board their Bowman 48 and will be crossing the Atlantic with the ARC, joined by several ARC Europe yachts who will complete their Atlantic circuit with a west to east crossing this November.