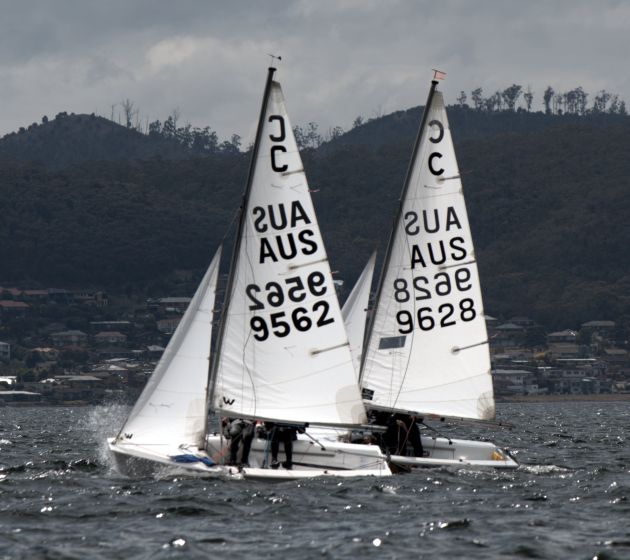 International Cadets will make up a large dinghy fleet in the Crown Series. Photo Angus Calvert.

A fleet of 67 harbour racing yachts will open Tasmania’s largest multi-classes sailing event, the Banjo’s Shoreline Crown Series Bellerive Regatta, with a spectacular twilight race on the River Derwent this evening. The regatta is unique in Australia in that it starts on a Friday evening with a full-on spinnaker race making use of Hobart’s long daylight hours in late summer.

Over the weekend a further 54 off-the-beach class multi-hulls and dinghies and a record fleet of 23 SB20 one-design sports boats will join the keelboats in this popular regatta based at Bellerive Yacht Club on the eastern shore.

An estimated 550 to 600 sailors, ranging in age from ten-year-old Cadet Dinghy crews to yacht skippers in their mid-70s, will be competing in the annual Banjo’s Shoreline Crown Series Bellerive Regatta aboard near 150 boats.

This evening’s race starts at 6pm from a mid-river line with 15 yachts in the Racing division and 50 cruiser/racers split into several divisions.

A highlight within the Racing division will be the annual ‘Mumm 36 world championship’, a boat-for-boat battle between the near identical Mumm 36, Jeff Cordell’s B&G Advantage, Ian Stewart’s TasPaints, both from Bellerive Yacht Club, and Gavin Adamson’s Madness from the Royal Yacht Club of Tasmania.

Another boat-for-boat duel is expected between the two Farr 30s, Matthew Denholm’s Cleopatra from BYC and Brett and Rowan Clark’s Co-op Toyota, which sails out of Geilston Bay Boat Club. This will be Co-op Toyota’s venture into interclub harbour racing but the up-river club members have had considerable success in Wednesday twilight racing at Bellerive Yacht Club.

BYC member Harold Clark has had outstanding success in this season’s Combined Club Long Race Series with his Farr 1104 Invincible, but in the Crown Series Bellerive Regatta will take on most of Hobart’s best harbour racing yachts.

Apart from the three Mumm 36s and the two Farr 30s, the fleet is a cracker one, headed by Wayne Banks-Smith’s Farr 40 War Games and Toby Richardson’s speedster X&Y.

The SB20 class is using the Crown Series Bellerive Regatta as their Tasmanian championship with the 23 entries a record for a State title. In fact it was equalled when 23 boats lined up last evening for the SB20 two twilight pennant races on the river. The class has boomed since the announcement that the Royall Yacht Club of Tasmania and the Derwent Sailing Squadron will jointly conduct the world championship in early 2018 with an expected fleet of more than 100 SB20s competing.

The SB20 championship will start tomorrow and continue on Saturday, along with the off-the-beach classes which include strong fleets of Lasers, Cadets and Optimists.

Seven International 2.4mR single-handed boats have entered, headed by Paralympic sailor Matt Bugg, who won the Australian championship and was runner-up in the World championship, sailed on the Derwent in early January this year.