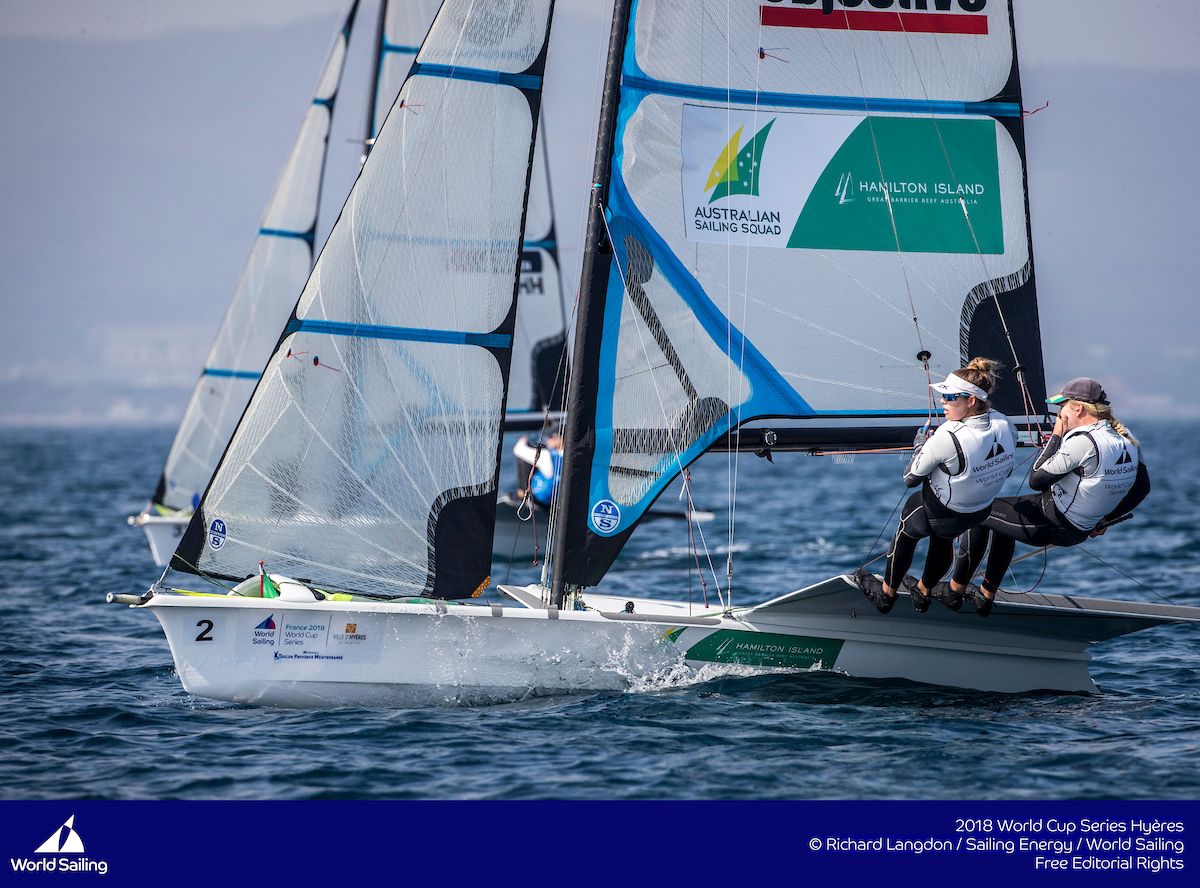 At 20:35 local time the last of the 647 sailors from 46 nations competing at the third round of Sailing’s World Cup Series in Hyères, France got back to the dock, marking the end of a long and challenging day.

A foggy morning with no wind became a sunny afternoon with a light 5-8 knot breeze that tested the sailors composure and patience with delays ashore and on the water.

Races were held across every fleet but only the RS:X competitors could complete their full schedule of races as the 49er competitors pulled down their sails under the glow of the marina lights to close the day.

For many years, the Polish RS:X team have based themselves in Hyères for Spring training and with plenty of time on the water, they know the venue well.

Success has followed in both the men’s and women’s categories and could well continue after Zofia Noceti Klepacka (POL), Hyères winner in 2008, 2016 and 2017 advanced to the top of the 44-boat fleet.

Klepacka, a London 2012 bronze medallist, sailed her way to a 5-1-6 scoreline and is seven points clear of China’s Peina Chen. Klepacka was relieved to be ashore after a grueling day in the light winds, “We were on land waiting to go out for quite some time, eating sandwiches and drinking coffee waiting for the wind,” explained Klepacka. “When we went out to race we had to pump a lot which made us very tired.

“I am glad that we will start after the men tomorrow so we can get more time to recover so let’s pray for more wind so we can sail.”

Much like Klepacka, Chen knows what it takes to achieve success in Hyères following a victory in 2009 and knows she has the skillset to move up the leaderboard, “On both days the wind hasn’t been stable and it’s been tiring for all of us to sail but I think I have really good strength,” expressed Chen. “That is why I can compete against some of the best like Zofia and Noga [Geller (ISR)] who are really strong sailors.”

In the Men’s RS:X, French sailors continue to occupy the top positions but a new leader has emerged. All of the top racers had a mixed day with good and bad scores combined but Louis Giard (FRA) did enough to grab top spot.

Three challenging Nacra 17 races were held and Italy’s Ruggero Tita and Caterina Marianna Banti picked up a 1-(15)-4 scoreline to remove the early pacesetters, Ben Saxton and Nicola Boniface (GBR), from the top of the tree.

The Italians recently won gold at the Trofeo Princesa Sofia and finished third at the 2017 Nacra 17 World Championship.

They are lacking a World Cup medal but only have their eye on one colour, “We are here to win,” exclaimed Banti. “We have some of the best here, including Santi and Cecilia, and Jason and Lisa. I think the Spanish, Fernando Echávarri and Tara Pacheco are also strong contenders.

“We will try out best and do whatever it takes. Our plan is to just sail as fast as we can.”

Iker Martinez and Olga Masilvets (ESP) round up the podium with plenty of races ahead of the 30-boat fleet. Olympic champions Santi Lange and Cecelia Saroli are in 9th, while Rio silver medallists Jason Waterhouse and Lisa Darmanin are 19th and carrying a Black Flag disqualification.

Helene Naess and Marie Rønningen (NOR) moved up to first overall in the 49erFX but New Zealand’s Alex Maloney and Molly Meech shone in the challenging conditions by picking up two race wins. The Kiwis are nine points off the leading Norwegians.

The day’s remaining race win went the way of Natasha Bryant and Annie Wilmot (AUS), 2016 Youth Sailing World Champions in the 29er, who are making only their second World Cup Series appearance.

Poland’s Dominik Buksak and Szymon Wierzbicki and Australia’s David Gilmour and Joel Turner continue to do battle in the 49er fleet. From two light wind races in a dying twilight breeze, the Polish team picked up a 19th, which they discard and an eighth. Meanwhile, the Australians won a race and count the 13th from the other.

Just one point separates them with two more days of fleet racing remaining. Belgium’s Yannick Lefèbvre and Tom Pelsmaekers are eight points off the leading duo in third.

The 470 Men and Women only managed to complete one race but this saw major shifts on the leaderboards as the discard came into play.

The Japanese team of Tetsuya Isozaki and Akira Takayanagi ascended from seventh to first place, and the Swedes, Anton Dahlberg and Fredrik Bergström drop to second. Paul Snow-Hansen and Daniel Willcox (NZL) occupy third. Mat Belcher and Will Ryan (AUS) are 6th.

In the Women’s 470, Noya Bar-Am and Nina Amir (ISR) made their way from tenth to first on the, and the Chinese, Mengxi Wei and Haiyan Gao, drop from first to second. Silvia Mas Depares & Patricia Cantero Reina (ESP) hold third place.

Jonathan Lobert (FRA) managed to retain his lead in the Finn despite not finishing his third race. Nicholas Heiner (NED) climbed up from fifth place and finished second whilst Jorge Zarif (BRA) drops from second to third place. Jake Lilley (AUS) is a point behind Zarif in fourth.

The Laser Radial has proven to be a tough competition between the top racers, even after just four close races. The fleet managed two races which saw a shift between Marit Bouwmeester (NED) and Paige Railey (USA). Bouwmeester now holds top position overnight, moving up one place whilst Railey dropped to second. Viktorija Andrulyte (LTU) maintains third place.

The Laser pack also managed to complete two races on day two. Tonci Stipanovic (CRO) continues to hold top spot after discarding his fourth race. Jean Baptiste Bernaz (FRA) capitalised in the light winds and moved up from fourth to second, whilst Pavlos Kontides (CYP) dropped from second to third.

Olympic champion Tom Burton continues to be the best-placed Australian in 11th, one ahead of Finn Alexander. Matt Wearn is 15th.

Antonio Squizzato (ITA) broke Damien Seguin’s (FRA) winning run in the 2.4 Norlin OD as he picked up the victory in the third race of the series, the only race the fleet held on the second day. The Italian is now just two points behind the flying Frenchman.