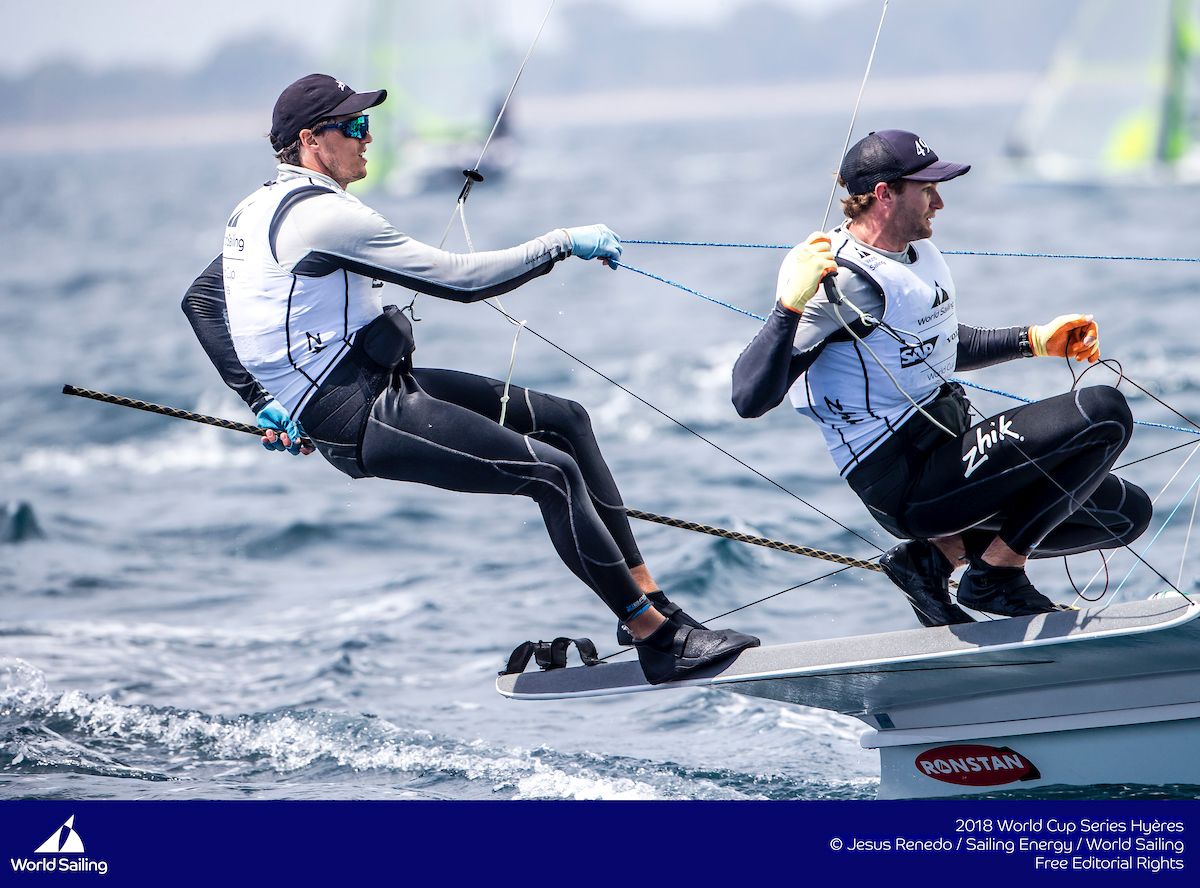 The opening scene at the third round of Sailing’s World Cup Series in Hyères, France saw the 647 sailors from 46 nations remain cautious as they laid down markers to build on for a full week of competition.

In a variable 6-11 knot easterly breeze, the competitors looked to achieve good finish positions that would put them in a strong place on the leaderboard for the latter part of the week.

The early races have set the scene and with a light wind forecast ahead, it’s going to be a mesmerising week of competition with all the competitors expecting more close racing.

Highlights from the opening day can be viewed here – https://youtu.be/uXEQHiSEqjc.

The 49er features 40 strong teams and Poland’s Dominik Buksak and Szymon Wierzbicki had the best of the day, recording a 3-(5)-1 scoreline. They are tied on four points at the top of the leaderboard with David Gilmour and Joel Turner (AUS).

“We started well and that was the key to winning today. Because the shifts weren’t very big, that allowed us to stay at the front from the beginning of the race,” explained Buksak on the secret to their consistent performance as those around them failed to do so.

“Our opponents were our biggest challenge,” continued Buksak. “We have some top sailors here and it’s a pleasure competing with them. Now that we are on the top, we will try our best to stay there and sail our best throughout the week.”

Although the Australians are tied with the Polish team, they picked up a 27th in the final race of the day, which they discard, meaning they’ll have to have a degree of caution for the rest of the week. “We started off pretty well in all our races,” said Gilmour, “but we found the wind to be quite tricky because weren’t sure of the wind speeds and shifts.

“In our last race, the wind speed just died, and it was tough competing in that. It was quite packed and highly competitive but that’s what makes World Sailing regattas different because you always get larger 49er fleets.”

Turner concluded, “Having a 40-boat fleet, it was tight racing and we couldn’t afford to make any mistakes.”

In a bid to win his tenth title in the 2.4 Norlin OD in Hyères, Damien Seguin (FRA) could not have had a better start. The Frenchman won two out of two races and was pleased with his performance, “Today was a beautiful day and a great start to the competition.

“The first race was good, we had 8 knots, but the second race was quite hard because the wind speed dropped to 6 knots and it was a long race – about an hour.

“I would say that I am quite competitive, and I like to win. That kind of hunger makes me push myself and that is how I win most races.”

Sixty eight sailors are competing in the Laser fleet in Hyères with nine of the world’s top ten racers and the three Rio 2016 Olympic medallists spearheading the fleet.

In such a highly competitive fleet it’s uncommon for one racer to maintain consistency and dominate. The norm was smashed to bits by Rio 2016 silver medallist Tonci Stipanovic (CRO) who won both the day’s races by huge margins.

“On my first race, I was struggling at the start and kept my main focus in mind,” explained Stipanovic. “My plan was to reach the left side, which I did eventually, and then tack for the mark. It was a good plan and it paid off.

“The second race was good, but I struggled with speed but the guys on the right had more pressure, so I decided to tack and clear to the right side which put me back on top.”

If today wasn’t good enough for the Croatian, he concluded by putting out a further warning to his rivals, “I hope that tomorrow I will be faster.” Pavlos Kontides (CYP) and Lorenzo Chiavarini (GBR) follow in second and third. Tom BUrton is the best of the Aussies in 9th.

Paige Railey (USA) imitated Stipanovic in the Laser Radial by taking another pair of victories. She is followed by Marit Bouwmeester (NED) and Viktorija Andrulyte (LTU).

The Finn fleet was the last to conclude racing as the breeze began to decrease towards the latter part of the day. Race victories went the way of Nicholas Heiner (NED) who is fifth overall and the second placed overall sailor, Jorge Zarif (BRA). Jonathan Lobert (FRA) sailed his way to a second and third which sees him lead. Jake Lilley (AUS) holds 4th place.

Pierre Le Coq (FRA) was in fine form on his home waters in the Men’s RS:X fleet. The Frenchman, Rio 2016 bronze medallist, took two races wins and a fourth and holds a narrow lead over Mengfan Gao (CHN) who won the final race of the day.

Only Gao separates Le Coq from three of his compatriots, Thomas Goyard, Louis Giard and Oël Pouliquen who are firmly in the hunt in third, fourth and fifth respectively.

In the Women’s RS:X, Peina Chen (CHN) and Noga Geller (ISR) are locked on five points each at the top of the pack. Hei Man Chan (HKG) and Maya Morris (ISR) are joint third on eight points apiece.

China’s Mengxi Wei and Haiyan Gao grabbed the early advantage in the Women’s 470 and are two points clear of Hannah Mills and Eilidh McIntyre (GBR). Camille Lecointre, Rio 2016 bronze medallist, making her first World Cup appearance with Aloise Retornaz (FRA), won the first race of the day and is third overall. Nia Jerwood and Monique de Vries (AUS) recorded a 12th and a 30th to be 23rd overall.

Racing will resume on Wednesday 25 April at 11:00 local time.