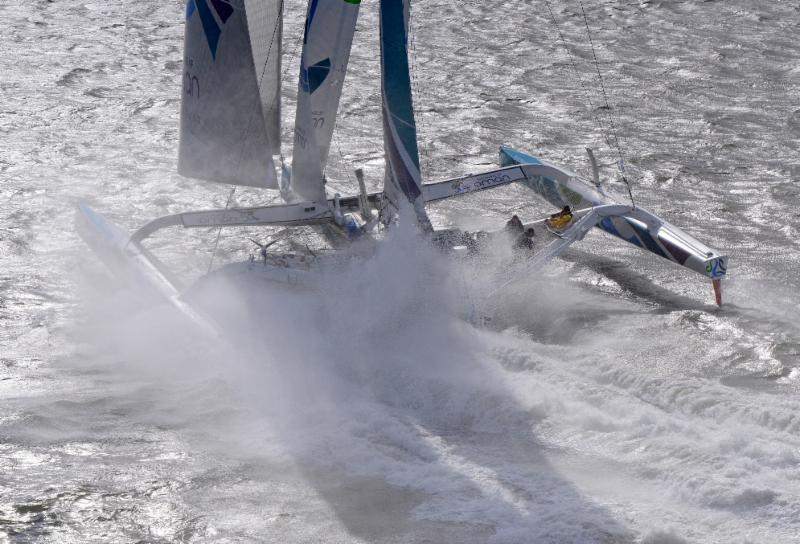 Tony Lawsons' MOD70 Concise 10 will be skippered by Ned Collier Wakefield in the Sevenstar Round Britain and Ireland Race. Photo © Rick Tomlinson/http://www.rick-tomlinson.com

24/04/2018
Tony Lawson's Team Concise has entered the Sevenstar Round Britain and Ireland Race starting in Cowes on Sunday 12th August 2018. Both the MOD70 Concise 10 and Class40 Concise 8 will take on the non-stop 1800-nautical mile race – one of world's toughest offshore races.
Concise 10 will be setting their sights on the ballistic world record set by Musandam-Oman Sail's MOD70 in 2014 (3 days, 3 hours, 32 minutes, 36 seconds). Twenty-nine year-old British sailor Ned Collier Wakefield will lead a world class crew. As skipper of Concise 10 he has set numerous race records and taken multihull line honours for the Rolex Fastnet Race, RORC Caribbean 600, Round the Island Race, Round Barbados Race and competed in two epic, high-speed RORC Transatlantic Races. This will be Collier Wakefield's second Sevenstar Round Britain and Ireland Race and he was the winning skipper for Class40 Concise 2 in 2010.
“We are finalising the team and intend to have seven on board for the race,” confirmed Ned Collier Wakefield. “Concise 10 is currently having a refit and we are thoroughly testing all of the hardware on board and replacing much of the rigging. Safety is always our primary concern and especially for this race, which in my opinion is harder than a transatlantic, for both the boat and the crew. Completing the race and taking line honours is our first goal. We would love to set a new world record, but it is a tough one to beat. 2014 was a very fast race. Prior to the race, Concise 10 will be looking for weather windows to break other world records.”
Twenty-four year-old British sailor Jack Trigger will lead a British crew of five racing Class40 Concise 8. A world class fleet of Class40s is expected to race for line honours in the Sevenstar Round Britain and Ireland Race and to take a tilt at the 40ft or under race record set by Roderick Knowles' Swish in 2014 (8 days 19 hours 6 minutes and 49 seconds).
Trigger has an impressive resume, including multihull line honours with Concise 10 in the 2017 Rolex Fastnet Race, and was part of the record breaking IMOCA 60 Artemis crew in the 2017 Length of Britain Challenge. Racing Concise 8, Trigger has won the 2014 and 2015 Class40 Division in the RORC Season's Points Championship and has set his sights on the Route du Rhum solo transatlantic race later this year.
“We are expecting all of the top Class40s to be competing in the Sevenstar Round Britain and Ireland,” explains Trigger. “Team Concise set the 40ft world record in 2010; in 2014 we didn't finish the race and lost that record, so we want to take it back! Concise 8 will be racing in the RORC Season's Points Championship this year and other events in preparation. This is a great opportunity for the team and a massive part of my preparation for the Route du Rhum,” continues Trigger.
– Louay Habib