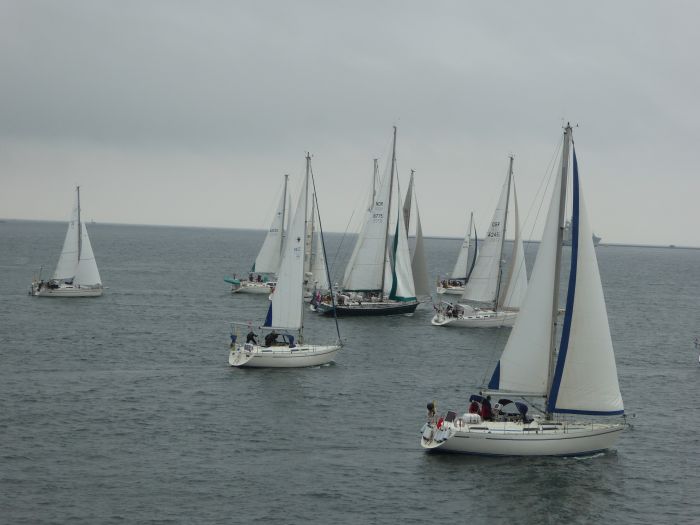 04/06/2019
Heading out into a cloudy Plymouth Sound on Sunday 2 June, seventeen boats began their three week adventure sailing to the sunny Algarve with World Cruising Club's annual sailing rally ARC Portugal.
ARC Portugal has been taking boats south to Marina de Lagos since 1995 and this year marks the 25th edition of the rally. It combines an “ARC style” fleet crossing of Biscay, with social day cruising and sight-seeing along the Atlantic coast of Spain and Portugal. Each of the stopovers are at enchanting port locations which offer opportunities to conveniently visit historical sights, enjoy local cuisine and experience the warm hospitality of hosting yacht clubs and marinas in Povoa de Varzim, Figueira da Foz, Peniche, Oeiras and Sines. This year's participants are certainly in for an exciting mix of great sailing and great sightseeing in the weeks ahead. 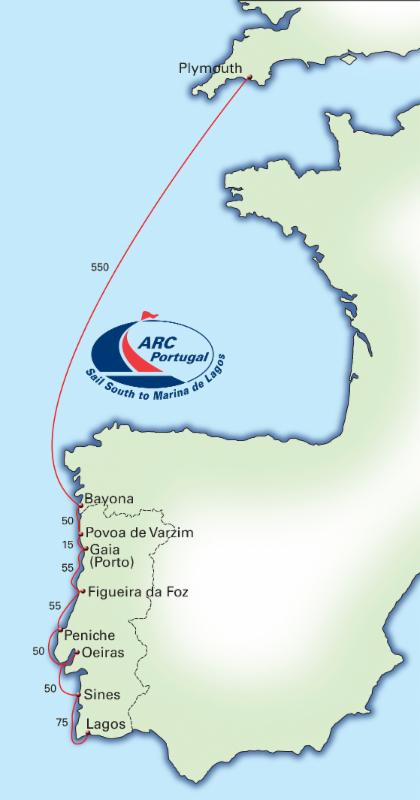 In total, twenty boats will be sailing with this edition of the rally and the diverse fleet includes a mixture of sailors who are new to longer passages and those who have sailed the Atlantic numerous times. A few taking part are familiar faces to World Cruising Club rallies, and for others this is the launch pad to a new liveaboard life in the Algarve or Mediterranean. One boat, Holger Ulrich's Parker 335 Tohuwabohu is set to continue their offshore adventures with ARC+ later this year.
Rob Fletcher sailed his boat down from Largs to join the start in Plymouth. “Preparations began for us two years ago to get our yacht Zafiro, Moody 36CC up to spec and in good shape to tackle an offshore passage. We think we are there but only taking part in the event will answer that question. The published ARC preparation guidance notes have been a valuable source of information, top tips and is a good read. We are now looking forward to setting off on ARC Portugal 2019!“
Also beginning their ambitious adventures are Steve Holloway and Judy Aslett. In 2016 they sold their house and moved on board their traditional cutter rigged Hans Christian 48T, Fair Isle. After spending 30 years as broadcast journalists for the BBC, ITN and CNN, a job which has taken them all over the world, Steve and Judy plan on sharing their experiences from onboard Fair Isle on their YouTube channel.
The organised programme for ARC Portugal 2019 began on Thursday 30 May when the rally office opened at Plymouth's Mayflower Marina. Sailing safely is at the heart of all World Cruising Club rallies, and as such each boat were visited by a member of the experienced safety team before the start to check appropriate equipment is carried, and the skipper and crew are content to use it should the situation arise. Other activities in Plymouth included provisioning shuttles, social evening dinners, a Rally Briefing and Skippers Briefing before Sunday's departure.
At the Skippers Briefing, Rally Meteorologist Chris Tibbs provided an update on the anticipated weather, which had been of much discussion during the week. Models have improved slightly and although there maybe a short period of challenging headwinds overnight on Monday and into Tuesday morning, crews hope to head quickly across the Channel following Sunday's departure to avoid the worst of the approaching front. Whilst it may be a little wet and windy for their introduction to Biscay, the fleet are well prepared and have the promise of some sunnier sailing in the Portuguese trades later in the rally; certainly an enticing thought as the waved goodbye to England's rather damp shores!
On Sunday, there was a steady S-SW breeze of 10-15knts blowing through the Sound as the fleet assembled for the starting sequence off the Royal Plymouth Corinthian Yacht Club line, providing a spectacular sight for the early risers walking along Plymouth's historic Hoe. Thankfully despite overcast skies, the rain held off for the start itself as Rally Control counted down to the signal at 0900. Plucky Moody 34 Sea Orchid and Regina af Vindö 43 Angelina, jostled for position to lead the fleet over the line. After a clear start, the fleet were whisked away past Drake's Island and soon making good progress along the coast before the head across the Channel.

This first leg of the rally will see the boats heading to Bayona where they will be hosted at the Monte Real Club de Yates. Rally Control will be continuing to monitor the forecast and provide the fleet with information about the conditions they can expect for the Biscay Crossing. Along with Rally Control, friends and family can also follow the fleet via the YB Fleet Viewer. First arrivals are expected to reach Bayona on Thursday where a warm welcome awaits.