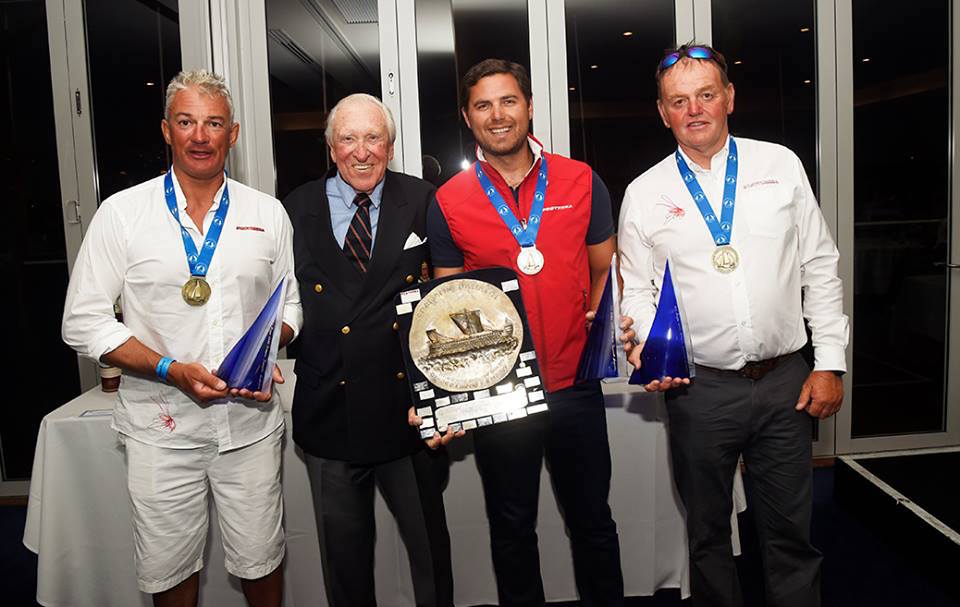 Andy Beadsworth, Ali Tezdiker and Simon Fry crossed the finish line in first place to win the final race of the 2019 Dragon World Championship and seal their second consecutive world title in style.

The Turkish team were the first to arrive in Fremantle to spend nearly a month two-boat training with Peter Gilmour’s Yanmar Racing Team. Their professionalism and dedication is testament to their success on the water. They did however have to work hard to ground out the victory which was only decided by the very last race.

The final race was held in superb Fremantle conditions, picture postcard blue skies and a moderate 12 – 13 knot S/SW breeze. The start under U flag was clear with none of the leaders prepared to push the envelope. Provezza lined up with Peter Heerema in AAA, Peter Gilmour, Yanmar Racing. Grant Gordon and his team Ruairidh Scott, Sophie Weguelin and James Williamson got a bit squeezed and had to tack to find clear air. Provezza tacked offshore to find a good lane leaving Klaus Diederichs in GBR819 to punch out on starboard. The rest of the fleet split fairly evenly across the race course.

It was Pieter Heerema from the Netherlands who turned the first mark in the lead closely followed by Provezza and Dmitry Samokhin’s Rochnrolla team including Andrey Kirilyuk and Jasper Harding. The leaders gybed early but Klaus Diederichs and his crew, Jamie Lea and Diego Negri chose to work the inshore route downwind.

At the gate Pieter Heerema’s lead was reduced to a boat length with the Provezza Dragon breathing fire down his neck. Rocknrolla remained in third followed by Klaus Diederichs in Fever in fourth and Grant Gordon’s Louise Racing buried down in 8th.

Up for the second upwind and Andy Beadsworth attacked the Dutch crew for the lead. This was also Louise Racing’s last real chance to close the gap between themselves and Fever which they needed to do to re-claim second place overall.

By the top mark second time around the machine that is TUR1212 had established a two boat length lead over NED412. Coming down the run Rocknrolla remained in third but crucially Grant Gordon’s Louise Racing had made up four places and close the gap on Fever.

By the final gate rounding as the late afternoon breeze begun to fade, all Andy Beadsworth and his crew needed to do was to cover Pieter Heerema to the finish line to claim his fourth bullet of the championship and the world title.

As the Turkish team crossed the line they punched the air in jubilation of a job well done.

Andy Beadsworth – Skipper Provezza: “I’m exulted It has been hard work, we haven’t had it all our own way, we made some mistakes and the pressure was on a bit in the last two days and it felt fantastic to cross the finish line having done the job we came here to do.”

And a word for the Provezza team principle, Ergin Imre back at home in Turkey: “Thank you very much Ergin, he has backed us and believed in us and I hope he enjoys the victory as much as we do.”

Ali Tezdiker – Middle man Provezza: “The first world title was a dream this one is like magic, I express my feelings, I am here for 40 days and I became a local. I learned everything about the weather and once again, we worked so hard in building this team and we trained so hard. We won the Prince Philip Cup and now the Worlds. To be honest I was expecting a bit more breeze here in Fremantle but in the end we crossed the finish line in first place and we are so happy.”

Simon ‘Stir’ Fry – Bow Provezza: “I think you have to go out and put your marker down and we did that today. I think we were a little faster in the bigger breeze. I was cross a couple of times that we let things slip but generally we sailed pretty well, pretty conservatively, when we needed to push the envelope we did but we sailed well.”

Ron Rosenberg – Provezza Team Coach: “You guys have worked so hard, thank you so much, Fremantle has to be one of the top five sailing destinations in the world.”

Behind them the battle was still on for second and third overall. Dmitry Samokhin steered Rocknrolla to third in the final race. Grant Gordon crossed fourth one place ahead of Klaus Diederichs to claim second overall. Klaus and his crew finished fifth to claim the third step on the podium.

Grant Gordon – Skipper Louise Racing: “We are delighted with second place, I am really so pleased the team really came together fantastically, Ruairidh, Jimmy and Sophie, the four of working together has been awesome, the starts have been good and we are delighted with the result. We are really pleased to be here. Andy is the champion but to be in second place on the podium we are very proud of that. Fremantle has been awesome, the race organisation has been great , the clubs, the people are friendly and thanks to everybody here in Fremantle.”

Peter Gimour and his team of Sam Gilmour and Yasuhiro Yaji sailing Yanmar Racing finished sixth to end the regatta in a well deserved fourth overall. Pieter Heerema finished fifth overall 3 points ahead of Anatoly Loginov in Annapurna. The effervescent Dutch girls with Pedro Andrade finished their regatta in a very impressive seventh place overall. The Olinghi team have lit up the regatta with their youth, enthusiasm and colour and out performed many of the high caiber teams sailing at these Worlds.

In the battle for the Corinthian and Masters titles, Nick Rogers and his crew Leigh Behrens and Simon Burrows. have raced a very consistent regatta to finish in 10th overall and capture both titles. Close behind all week long has been local Royal Freshwater Bay YC sailors Andrew Foulkes, Andrew Bennett and Matthew Stafford.

The final presentations gala was held at host club the Royal Freshwater Bay YC overlooking the Swan River as the sunset. Dragon legend Gordon Ingate presented the trophies only to be awarded a special award himself for his services to the Dragon Class.

The whole team representing the Royal Freshwater Bay Yacht Club have worked so hard to make this championship an outstanding success and from the feedback received it has been an incredible event run under cloudless blue skies, stunning aquamarine waters, challenging waves and mid to strong winds.