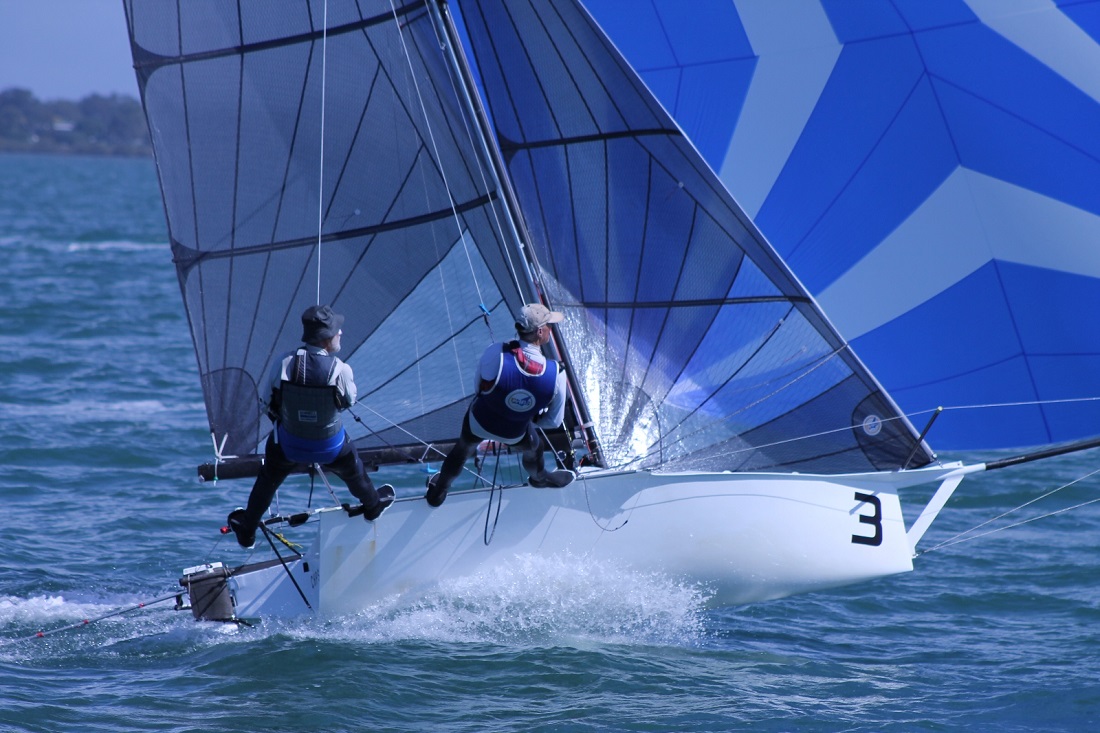 While the bulk of the 35 entries competing in the Your Move Conveyancing 12Ft Skiff Interdominion were left dealing with capsizes, two departing passenger ships, two tug boats and ferries, Nick Press and Andrew Hay put yesterday’s misfortune behind them to win both Races 6 and 7 in a blustery southerly on Sydney Harbour.

From the Sydney Flying Squadron, host of the event, you can’t see what is happening on the Harbour weatherwise, so crews were choosing their rigs based on a predicted 15-18 knot southerly, but once out there, it was 22 plus knots with up to big gusts and choppy water.

Boats starting capsizing pre-Race 6, as the southerly whipped up, but Press/Hay (Sydney Sailmakers) and Brett Hobson/Jeremy Jones (Geotherm) were fast off the start.

Most chose to go left, bouncing off Bradley’s Head. It wasn’t long before Sydney Sailmakers took the lead from Geotherm, both NSW boats carrying spinnakers, when Kiwi entry, Jackson Electrical (Chris Skinner/Chris Holland, sailing higher on the course, came flying through under main and jib, nearly catching the lead pair.

A second Kiwi entry and defending champion, Alex Vallings with new crew Sam Tretheway (C-Tech) made up ground under spinnaker to move up to fourth place.

Past Taylors Bay and around Shark Island, Sydney Sailmakers increased her lead, leaving Geotherm, Jacksons Electrical and C-Tech to fight for the minor placings – in that order. Ugly Stick, a Kiwi boat crewed by Simon Ganley/Oliver Scott-Mackie, came flying through with their trademark bright pink kite to finish fifth.

Behind them, the places were an ever changing feast, courtesy of capsizes. Some were hampered by ships and ferries, while the lighter newer boats were screaming down the bumpy runs, fighting to stay upright. It made thrilling viewing.

“It was a lot fresher than we thought it would be,” Press said afterwards. “We were lit up like a Christmas tree. I’m glad we got a good start and got going down the run. From there, we sailed conservatively.” Well, his version of it, anyway.

Race 7 and a massive shift and a big gust hit as the start gun went. Hobson, as he does, steered Geotherm to the best start, while a capsized boat caused problems for Press, who had to duck behind it and up again to start, coming close to a capsize himself.

A head start for the rest we thought, as the majority headed right. Wrong. Sydney Sailmakers got out of difficulty and tacked left. A few blinks later she was up with the leaders. Down the run she took the lead, while boats were falling over behind them. Along Sydney Harbour’s west shore and the southerly had eased a little, having the effect of compacting the fleet in a closer race for all.

Duelling all the way to Nielsen Park, Geotherm tacked left towards the park, while Sydney Sailmakers sailed further towards Shark Island before tacking. Geotherm’s move paid off – momentarily. By the time the boats sailed around the Island, Ugly Stick’s big pink kite was first – with a big lead – leaving Sydney Sailmakers, Geotherm and C-Tech behind them.

It wasn’t over. As they sailed the last leg to the finish, a ferry caused Hobson to make a quick decision to tack Geotherm, killing his and Jones’ chances. Ugly Stick looked a certainty, but no, Sydney Sailmakers lined up the finish and sailed through to win from Ugly Stick, C-Tech and Geotherm, with Jackson Electrical fifth.

“We got buried at the start – lucky we didn’t go in. Then at the end, Ugly Stick sailed too low to the finish line and we got him,” Press said. After yesterday, we had all the luck today – and it was one of Noddy’s (Hay) best performances.”

Defending champion Vallings had a solid day too: “We stayed upright all day, but we still haven’t got the finer details down,” he said.

Behind them, The Bird (Jamie McCrudden/Glenn Farquahar) had to do some fancy footwork to avoid a ferry, and held it together, only to capsize a minute later. Murray Press (Nick’s dad) and Scott Lanham (Southport Sails) found their race brought undone on the run to the Athol Bay finish. The spectator vessel in their path, they avoided capsizing, only to find a fellow competitor in their path on the opposite gybe. Both tipped over.

Sydney Sailmakers leads the Interdominion five points ahead of Geotherm with a drop in place. A further drop will come once nine races are completed. Realistically, the winner is likely to be one of the two. After tomorrow’s layday, three races remain in the Your Move Conveyancing 12ft Skiff Interdominion, supported by Brentnalls NSW – two on Friday, the finale on Saturday.

A spectator ferry will follow the final day of racing. Tickets can be purchased via the Sydney Flying Squadron website: www.sydneyflyingsquadron.com.au. The ferry will depart the club at 2pm. Drinks can be purchase on board, but we recommend having lunch beforehand.