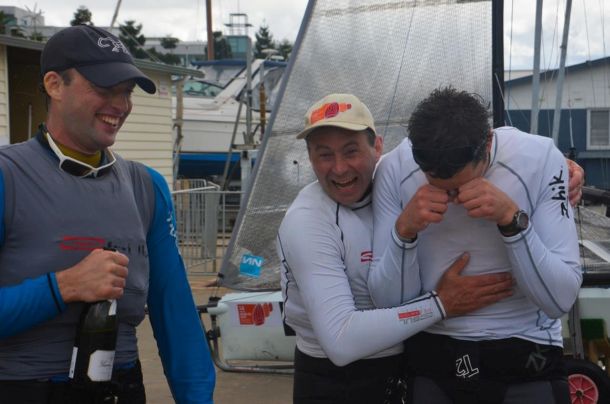 The newest I14 World Champions

Britain’s Glen Truswell and Sam Pascoe have locked in the 2015 International 14 World Championship title with a day to spare after another superb display of confident racing on Geelong’s Corio Bay. Not satisfied with finishing with a safe fifth place, they stormed into first place in Race 6 and into the class history books.

“We woke up this morning knowing we had just two races to go and we needed to get a fifth or above in either race assuming Ben (McGrane) won both. We got down to race to find perfect conditions,” Truswell said.

As Truswell and Pascoe pulled their boat up the ramp at Royal Geelong Yacht Club and were greeted with a champagne spray and cheers from their supporters, Truswell showed obvious relief at returning to shore the newest World Champion. “All young boys in England growing up and learning to sail, dream of coming down-under to win a skiff event. It means so much to have done it,” Truswell said

The team sailed a conservative race, playing the pressure and wind shifts to just finish a few boat lengths ahead of Brad Devine and Ian Furlong (AUS). In third across the line was Archie Massey and Harvey Hillary (GBR). Massey was quick to congratulate Truswell and Pascoe, handing over the title he has held for the last four World Championships.

A disappointed Ben McGrane and James Hughes (GBR), who went into today’s race with a chance of unseating Truswell, finished fourth.

The fleet headed out this afternoon to be confronted by massive shifts and constantly changing pressure. After a 40 minute delay on the starting time, the breeze finally settled into a south-easter of about 12 knots gusting 18.

Truswell said the breeze constantly shifted throughout the race. “When you are trying to get one steady result and not get expose yourself, it was the last thing we wanted to see. On the first beat we didn’t do quite as well as we didn’t want to hang in a corner and get hung out to dry. We tried to sail the middle shifts, the middle beat, but it was becoming apparent it wasn’t working. To do better in the race, to get the result we needed, we had to commit. That put us massively outside our comfort zone,” Truswell said.

Their commitment paid as the early leaders – Andy and Tom Partington (GBR) and Graeme Everett and Andrew Wilson (AUS) – fell away with the massive gains and losses of the last two laps. Truswell kept up the pressure moving from fifth at the gybe mark to fourth at the top mark second rounding and into the lead by the top mark third rounding.

“As the race progressed we started to get through to the front and in a sufficient position to win the championship. Even at the finish when the gun went, it didn’t really sink in. We were so into the race and so intently trying to get the result that it took until we got back to the shore to relax,” Truswell added.

Devine didn’t allow his painful back distract him from pursuing an aggressive assault on second place. He came out of the first top mark rounding in third and then fought the left-hand shifts to make it into second by the top mark third rounding.  “We kept Truswell honest,” Devine said as he headed off to find a heat pack for his back.

Massey and Hillary’s results of third today still keep them in touch with the podium. They felt that for the first two laps they were sailing slow, firstly blaming weed on the foils as the reason. “Later on we went out to the left-hand side, sailed away from the other boats and just went fast and had good lanes downwind,” Massey said.

At the end of racing today Massey admitted Devine has found his form and will continue to be a real threat tomorrow. “Brad is starting to wind it up and go faster and faster so tomorrow’s race will be good,” Massey said.

McGrane and Hughes went into today with the plan to sail conservatively, but ended up struggling to find the necessary speed to be able to threaten Truswell. They also weren’t happy with how their replacement mast responded in today’s conditions.

They go into tomorrow’s final race of the series holding onto second by five points and plan to do whatever it takes to protect that placing.

The Partington’s had a stunning first lap leading the fleet. By lap two their lead was diminishing as Devine and Truswell closed in on them. By the third lap they were clearly struggling, dropping back to finish in ninth across the line. This result has moved them back from equal third overall to fifth place.

The closeness of the top sailors – McGrane/Hughes, Devine/Furlong and Massey/Hillary will ensure a demanding final race tomorrow.