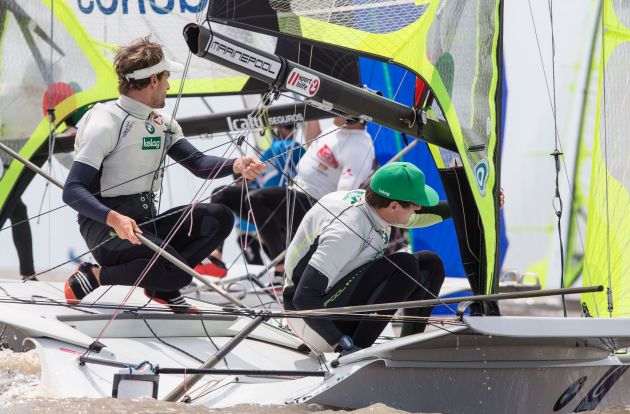 It was a tricky first day for Australian Sailing crews at the 2015 49er/FX World Championships, which kicked off at Club Nautico in San Isidro Buenos Aires, Argentina on Monday, 16 November 2015 local time (16 – 21 November 2015).

In light conditions Olympic gold medallists Nathan Outteridge (NSW) and Iain Jensen (NSW) posted two top ten results in the first two races of the day, but an OCS in the third and final race of the day pushed them back into 27th place on the overall leader board with another five race days to go.

“Today was a tricky day with five to ten knots all day and shifting twenty degrees, so it was hard to see what was going on. It kind of all looked the same on the water, so it was hard to be on the right side every time,” Iain Jensen said about the conditions of the day and the challenges of reading the murky brown Buenos Aires water.

“We came away with a ten, five and an OCS, which is a bit disappointing. In general we sailed okay, but it’s a shame about the OCS. Otherwise we would have had three races in the top ten as we were in ninth in that race,” he added.

“Tomorrow we’ll be in the afternoon slot and that’s looking a bit better for the forecast. Tomorrow morning is again looking light and hopefully there will be an ok breeze by the afternoon. With the OCS we obviously have to make sure that we don’t have another one in the qualifying.”

After the first three races, Australian Sailing Team’s David Gilmour (WA) and Rhys Mara (VIC) are the top ranked Australian crew in overall 18th (5, 16, 16) with Victorians Will and Sam Phillips following in 24th.

Queenslanders Joel Turner and Lewis Brake had an OCS in race two and sit outside the top-30 required for gold fleet after day one, but have another two days of qualifying to move back up the results ladder.

“It was super tough day with not a lot of breeze and we got caught on the wrong side of the course quite often. We were handling the boat well and sailed pretty quickly, but just got caught in the wrong spots and an OCS never helps the scorecard,” Joel Turner said self-critically.

“There are still another two days of qualifying so we still got plenty of racing to go to get into Gold Fleet and climb up the results ladder. We need to switch our heads on, make sure we’re still sailing fast and that we’re sailing a little bit smarter. Anything can still happen with another seven races in qualifying.”

In the 49erFX four races were sailed on day one with Australian Sailing Squad’s Tess Lloyd (VIC) and Caitlin Elks (WA) posting an eleventh, tenth, twelfth and a third place in the last race of the day. This puts them into 18th overall after day one.