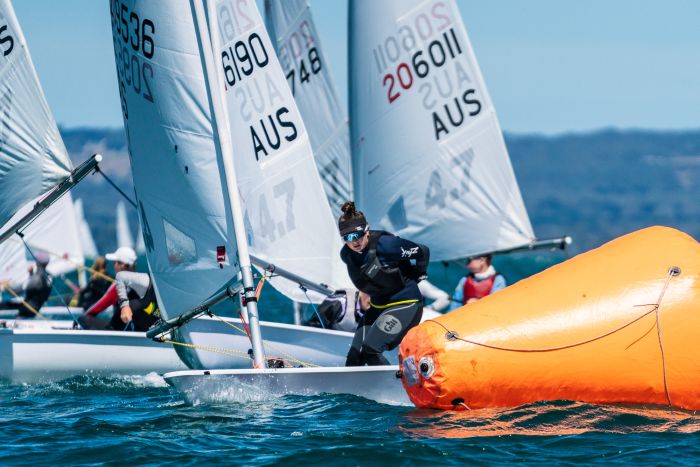 Several leading boats got knocked off their perch atop the standings after a tricky second day today at the Australian Youth Championships at Sorrento Sailing and Couta Boat Club (SSCBC).  Racing didn’t get underway until 45 minutes after the scheduled start time due to shifting light winds and a strong current, but when racing did start it was backed by eight to ten knots from the south which built throughout the afternoon.

In the Techno 293 Jake Hindmarsh (WA) of Royal Perth Yacht Club moved up to first place after taking out three bullets.  “I focused on racing upwind instead of focussing on set up,” Jake said after his big day. “I do a lot better in the windy conditions but I’m still pretty fast in these conditions.”

Linus Talacko and Lachie Grogan (VIC) from Royal Brighton Yacht Club moved into first in the 420 class, despite sailing a drop in the first race.  “It was pretty inconsistent breeze across the day, but especially in the first race,” Lachie said while derigging. “In the last two races it filled in so it was important to stay between our competitors and the next mark.”

Linus added, “We got a bad result in the first race but we didn’t get hung up on that which helped us to bounce back in the last two races.”

Dual state team Jamie Bougher (WA) and Ryan Littlechild (NSW) moved into second place, despite only having sailed together for three weeks.  “We were conservative and not getting too far away from the leading pack,” Ryan said of today’s racing.  “We got a favoured start in all three races so that ended up pretty good for us.”

When asked of their partnership Jamie explained, “Ryan texted me saying, ‘You want to go win the Nationals?’ and that’s what we’re trying to do.”

Ryan added, “Jamie just came over to Sydney and we trained almost every day over a three week block.”

Bridget Conrad and India Gilbert (NSW) maintained their first place in the 420 Girls.

In the Laser Radial Boys Michael Compton (WA) from South of Perth Yacht Club jumped several places to move into first.  “I made the mistake on the first day of not backing my judgement and it cost me a few places,” Michael reflected.  “I really worked on that today and tried not take too many risks by hitting corners because it’s quite shifty, similar to where I sail at home.”

Kristen Wadley (QLD) remained top of the Laser 4.7 Girls even after a trying day on the water.  “The wind went right, I went left. The wind went left, I went right.” Kristen explained.  “The first race was a bit of an abomination, the second one I can carry if needed.  I was lucky enough in the third one to get on the right wind shift.  That was definitely a keeper in these conditions.”

In the Nacra 15 Brin Liddell and Rhiannan Brown (NSW) from Belmont 16ft Sailing Club closed the gap between first and second place after two firsts and a second.  Reflecting on their strategy Rhiannan said, “I feel like today was better because it wasn’t pressure sailing it was more was tactical.  You use your head a lot to more to trim and we found that easier.  The downwind legs were fun as well.”

Brin added, “It was lighter today and we worked hard to stay in the pressure.”

A light northerly is forecast for tomorrow with a late southerly expected.  SSCBC Sailing Manager Ben Fels was cautious about making predictions on conditions, “The weather gods are rolling the dice tomorrow.”