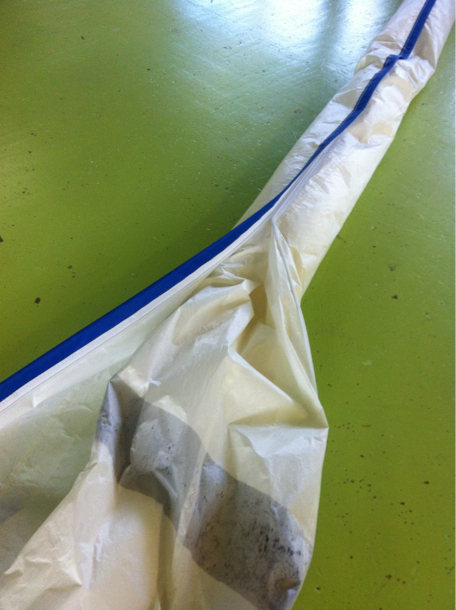 North Sails has been fitting the zip system to kites. Photo Ross Vickers.

Disposal of rubbish into the sea has been a hot topic at many international regattas over the past two years. This follows Key West Race Week 2013 amending its sailing instructions just a month before the regatta. The amendments made it clear that under rule 55, the disposal of spinnaker wool bands (sail stops) into the sea would be considered trash. Any boat disposing of this “trash” would be subject to disqualification. Key West Race Week like most Australian regatta’s had written into their sailing instructions that disposal of bio-degradable wools for setting of sails was allowed. It reversed its decision after public pressure mounted. Since then many other international, regional, and club regattas around the world have followed suit.

Many clubs and sailors have long thought that the rule only prohibited non-biodegradable trash in the water. However the rule makes no distinction. In NSW at least, the environment protection laws also make no distinction. A number of regattas are still changing rule 55 to allow the use of biodegradable sail stops for setting of sails. This practice may be illegal in some Australian states, and certainly in marine parks and world heritage listed areas such as the Great Barrier Reef.

The common practice on boats over 40 feet is to tie woollen bands around a rolled spinnaker as sail stops for the first half from the head, and also along the tack of asymmetric gennakers. This aids the crew in hoisting the sail because there is little to no pressure on the halyard, tack line or sheet until the sail is sheeted on and the sail stops break. Doing this enables smooth, efficient hoists, and is almost essential in yachts over 50 feet due to the size of the sail.

When ISAF released the current wording of the rule in the 2013-16 edition of the Racing Rules of Sailing, it was quickly asked about the setting of spinnakers, outlined the intention of the rule to “support a development of sailing in a direction towards a higher level of environmental responsibility, Event organisers and officials should also comply with the basic principle in the rulebook about environmental responsibility. Simply deleting rule 55 is the opposite of that” : N 003 Q&A 2013-029 (published August 5, 2013, revised August 27, 2013)

US Sailing also issued a similar opinion, stating “The broken sail stops that fall into the water, although biodegradable, are trash that the competitor intentionally put in the water, there Boat A has broken rule 55”

The ramifications of this rule go far beyond just wooling of spinnakers to help get them set. Cigarette butts, food scraps, and the old sailors favourite “home for a fish” empty beer can must all be stowed on board and disposed of ashore correctly. The only exception to this is in races which take the yacht into international waters where the Marpol regulations apply. Marpol is the international convention for the prevention of pollution from ships. It governs everything from discharge of waste water, to food scraps. Races such as the Transpac often draw attention to Marpol, which allows for the limited disposal of bio-degradable rubbish once outside a certain range from the coast.

Given that it is almost certain now that the disposal of any material into the sea is disallowed going forward, sail makers have been quick to develop some very innovative solutions to enable big sails to be set without woollen bands.

North Sails have been developing a number of solutions with lofts in Australia, North America and Europe all working together. The group has now narrowed their development down to three very simple solutions depending on sail size and weight.

For smaller, inshore yachts a it has developed a Velcro tab on a retractable shock cord that is sewn into the luff tape. This provides a familiar “wool like” solution. The Velcro tab is pulled out and wrapped around the sail just like a wool band would be at around three to six foot intervals. When the sail is sheeted on the Velcro releases, the shock cord retracts the tab back into the luff tape to give a clean sail. In most cases North Sails believes this method is actually faster than tying wool bands.

Alby Pratt, sales manager at North Sails Australia says “The system is working very well on the smaller boats up to 45 foot, and is a clean, easy system to use. Larger boats require much more Velcro contact area to hold the packed sail together during the hoist”

The larger boats that Pratt mentions are grand prix racers such as RC44s, TP52s and Mini Maxis. The sails on these boats are larger and heavier and are typically hoisted by the grinders, almost three quarters of the way just before the mark. In this setup the sail has large Velcro patches sewn on to the luff tape and also on the sail around 1 to 2 foot back from the luff. Packing involves “rolling” the sail into a tube between the two Velcro patches and sticking the Velcro together.

North Sails third system is becoming a favourite on the Mini Maxi circuit this year. The sails are fitted with a zip on the sail that can quickly and easily be zipped up. This offers security during the hoist but also allows easy opening when the sail is hoisted.

Pratt notes “I have used this system successfully on the mini maxi circuit. We have also been fitting it to some of the MC38’s and also to the TP52 Shogun V. When there is a lot of water getting thrown around it is a good option as it gives peace of mind and security.”

Mike Sanderson, winner of the 2005/06 Volvo Ocean Race, and director of sales at Doyle Sails New Zealand believes the trash rule is a good one, commenting that in years gone past “rounding the top mark in the mini maxi fleet you would see lots of wool floating in the water.”

Doyle Sails also have placed a large amount of research and development time into finding ways of packing spinnakers and gennakers over the past few years. They have two main solutions that they believe are working well.

Up to Mini Maxi size they have implemented a Velcro solution placing one half on the luff tape and then rolling the sail on itself as you would when packing with wools. The other side of the Velcro is then placed wherever it is required to maintain a tightly packed chute.

Once the sail gets bigger, or is intended for high wind strengths, such as an A4 gennaker, Doyle Sails goes down the zipper path with a very similar setup to North Sails.

Sanderson, who is also the crew boss on the Mini Maxi Bella Mente, says they were forced to find a solution so they could race at Key West, which they did and now he is “quite annoyed when the sailing instructions rewrite the rule as ISAF’s intention is clear, and we have put a lot of time and effort into developing a solution that complies.”

It is expected that Australian regattas will follow those in rest of the world and no longer offer the “biodegradable sail stop exemption” in the sailing instructions. This is particularly likely for races in and through environmentally sensitive areas such as the Whitsundays on the Great Barrier Reef. There are now a number of effective, cheap alternatives to wooling of sails that are actually faster and more secure. The sport needs to move with the times, and in five years time when telling stories, the young guys will just not believe what we got away with when setting sails. ✵