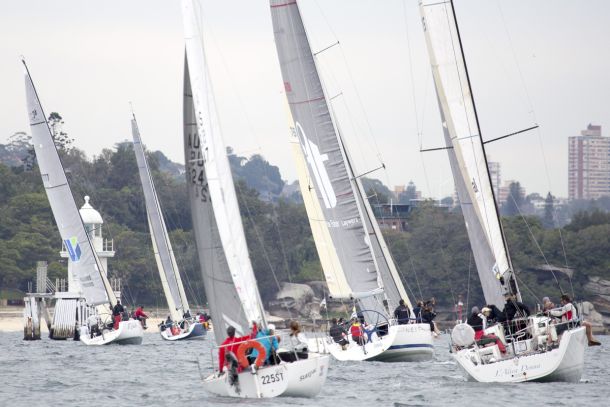 It was a long, long day at the office in the Land Rover Winter Series today, as light to even lighter winds flicked from one point of the compass to the next and the next, but with three weeks remaining to decide divisional winners, nobody was prepared to give in.

The breeze stumped all in the Cruising Yacht Club of Australia’s series on Sydney Harbour, but no-one could knock the beautiful sunny day which was better for sight-seeing than it was for racing.

“Looking at conditions before heading out, I went on the water thinking I might have to abandon the race, but a 9-10 knot westerly changed my mind,” Principal Race Officer Robyn Moreton said reflecting on the day’s conditions. “Next time I looked up, I thought ‘oh God’, because there was 3 to 4 knots at North Head, so at that point I thought about shortening the course. But the wind came back again and quite a few boats got through the gate the first time, so I thought we’d be OK,” she said.

“Unfortunately, I looked up again and there were little puffs of north-east and then I looked to Point Piper a short time later and it was puffs from the south-east. It was just one of those days. It wasn’t easy for anyone. Having said that, only 10 yachts from 107 starters retired; and two could not finish within the time limit.”

Moreton said Scarlett O’Hara, Robert Skol’s 30 Square Metre, a heavy boat sailed to advantage in big breeze, was just 100 metres from the finish when she ran out of time. Last Tango, well named in this instance, still had some distance to go, but the Salona 44’s skipper, Rob Blanch, was not giving up, insisting they could finish inside the time limit.

“There was some pretty funny banter going on between us over the radio,” Moreton said. “I told them ‘in your dreams’, when they claimed they could make the cut off time. I could see them way down the Harbour – we both had a good laugh.”

For others, the day just got better and better.

Tim Ryan put the cat amongst the pigeons when he sailed James, his J70 to victory in Division E. The win has allowed James, with its distinctive ‘007’ sail number, to move into the series’ lead, leapfrogging Jonathan Green’s Melges 32, Crusader, which finished fourth today, so regresses to second overall.

Ryan is well aware that he will have to stay on top of his game, pointing out the top seven boats are within cooee of each other. “The Series is very close – it’ll be an interesting next three weeks and very much weather dependent,” he admitted this evening.

“We tend to go better in heavy air, but we did OK in the light breeze today. We made the best of it. While others got caught in little or no breeze, we stayed within the breeze. We had 5-6 knots all the way to the first mark and we carried some from the Bell Buoy.

“We sailed really well,” said Ryan, who later in the evening heard he had won the weekly lift stand launch and two free lay days courtesy of Noakes Group.

“We had Steve McConaghy come out with us yesterday and I’m sure that helped towards our win – that and a bit of luck,” Ryan said, adding: “We were back having a drink at the CYCA while a lot of others were still racing.”

Rogerio Blanc-Ramos reported from Division K winner, Applejack, “I am certain there has been enough said about the light weather today. Again I was short on crew with only Catlin (a 19 year-old having her first yacht race) and Sergei, who joins us occasionally.

“I did try to get my daughter, Tara (a gun CYCA Youth Academy match racer) to join us, but she‘s navigating on Utopia. I begged for her to join us, but they wouldn’t a bar of it! I was determined to race Applejack for placing anyway.

“We were lucky to be one of the first starters and had 6-9 knots which got us going. From Nielsen Park we got a lift and were able to take some advantage to the gate. As we approached the finish line, the wind died down. A good day for us, but I felt sorry for the back starters,” Blanc-Ramos ended.

With three pointscore races remaining, the Series is already showing indication in some cases as to which yachts are likely to win and finish top three in their individual divisions, while others will come right down to the final race.

The last of the three-race Ladies series, which finalises the Land Rover Winter Series, will be decided on July 12.

Weekly prizes are awarded to the top three placegetters in each division and include exclusive CYCA Land Rover Winter Series merchandise. One lucky division winner is also drawn to receive a Land Rover Range Rover Evoque experience for a week. This week it went to Division F winner, Anthony Booth (Selkie).

A second draw is held for a lift stand launch and two free laydays courtesy of the Noakes Group, which today went to Division E winner, Tim Ryan (James).

Racing continues next Sunday with Race 8 of the Land Rover Winter Series.