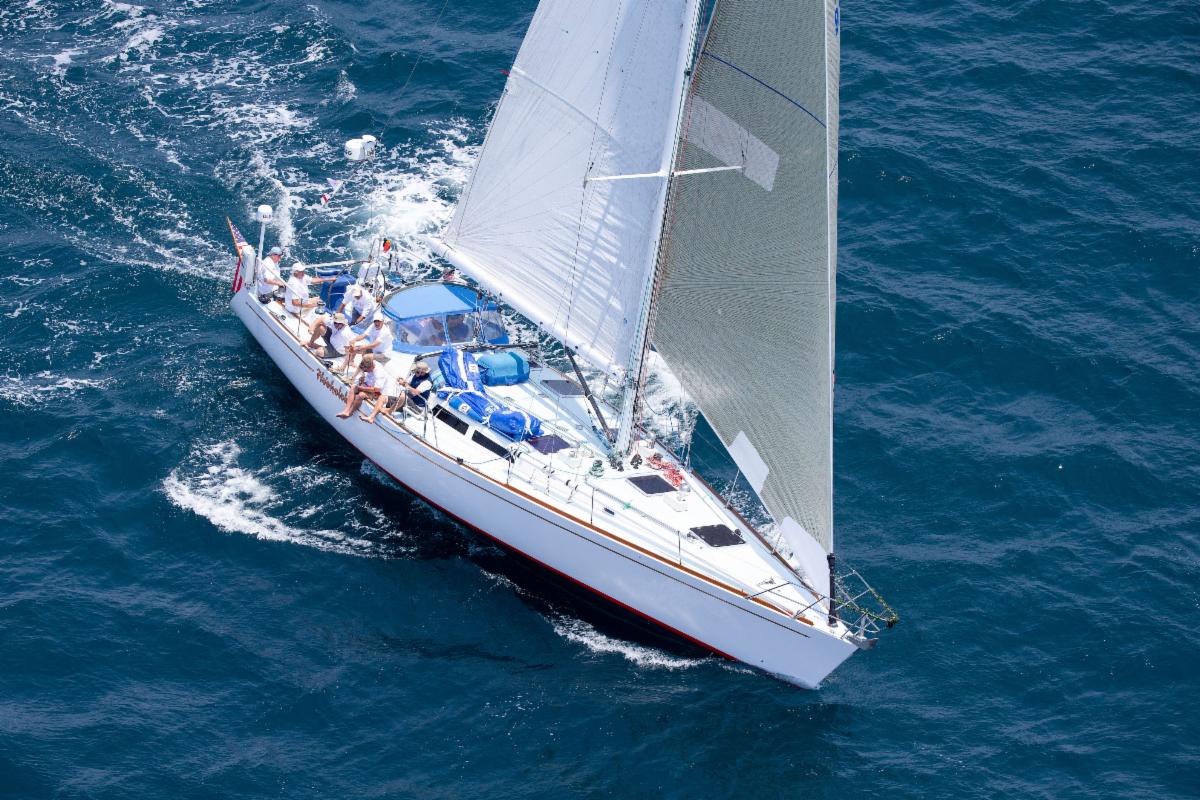 At their tracker position of 27° 08’ North, 140° 44’ West they were speeding towards the finish at Diamond Head on Oahu at 11.8 knots, having traversed 227 miles in the past 24 hours. The team on board is a mix of nine offshore sailors, both young and old, from California and Hawaii.

“My first Transpac was in 1965, on a South African boat called Storm Vogel,” Cecil Rossi said prior to their start. “I’ve done a lot of them since, but missed a few when we had our kids. I’ve probably done pretty close to 20 including Tahiti races.” The 3570-mile LA-Tahiti Race, was first raced in 1928 and has been held 16 times since. Rossi shared a deeply personal perspective about this race as well. “Its kinda hard with age, getting older,” he confessed. “You miss not sailing with your friends.”

On board Ho’okolohe (which in Hawaiian means “to make mischief”) are urns with the ashes of four former crew mates who have asked after passing to be dispersed at sea, a testament to the deep and abiding commitment sailors make to each other while sailing this race. The years and races may blur together over time, but the emotional attachments among Transpac crew mates never seems to fade.

The reason Ho’okolohe is out in front of the pack is not that she is the fastest boat on the course, but the fastest among the first wave of starters that left California six days ago. The leader in the next wave of starters is Bob Pethick’s Rogers 46 Bretwalda3 from Palos Verdes, CA and his crew of eight. They too are speeding along at 11.8 knots and have 1500 miles left to sail.

And only a few miles behind Bretwalda is Roy Disney’s turbo Volvo 70 Pyewacket, sailing at a whopping 17.6 knots, and will be where Ho’okolohe is now in 28 hours. At its current speed Pyewacket is set to pass the Hawaiian team on the final approach to the finish, probably some time on Friday.

Pyewacket navigator Peter Isler’s early prediction of this being a “classic” Transpac in the wind patterns and route choices seems to be holding true: boat tracks show an initial sag – but not a deep dive – to the south off the start to get across the ridge of pressure extending south east from the center of the Pacific High. Then the teams are lining up to be on straight tracks parallel and not too far south of the rhumb line, since the wind pressure seems solid in the course area without the light air of the High threatening to move south. Eventually the wind will shift further aft and they will be in full running mode to Hawaii, planning their next moves on where to be on final approach to Oahu.

This is explained in the daily race analysis videos being made by Seahorse Magazine technical editor Dobbs Davis, a veteran of many Transpacs and other ocean races, who uses the YB tracker software to evaluate the course and how the teams are performing.

The YB tracker software with 4-hour delayed positions is at https://yb.tl/transpac2021, and Davis’s show is loaded on YouTube at https://youtu.be/gsqRxErbazc.