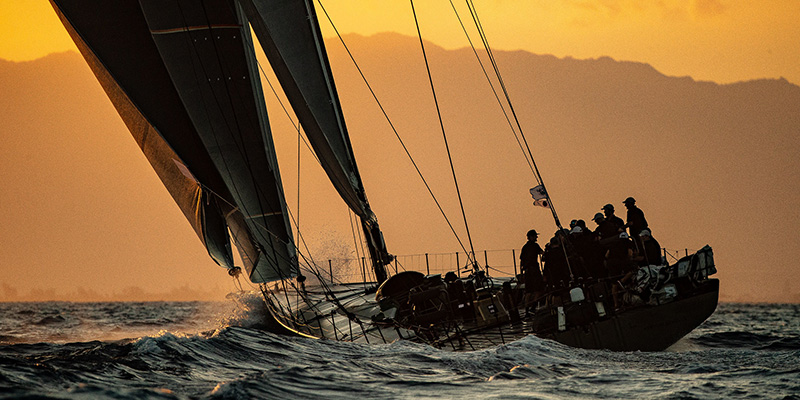 With a finish time of 19:34:25 HST today, Manouch Moshayedi's Bakewell-White 100, Rio 100, has become the fastest monohull without powered performance systems to finish the 50th edition of the biennial 2225-mile LA-Honolulu Transpacific Yacht Race.

In doing so, Rio 100 she has won the Merlin Trophy, which this year was re-defined from its original criteria of being awarded to the fastest monohull of any configuration in the race.

Rio 100 is the first boat in the history of Transpac to have won both the Merlin and Barn Door Trophies. Asked how he felt about this, Moshayedi said “It feels fantastic, I'm going to go down the list of trophies, one by one.”

Two years ago when Rio won the Barn Door Trophy, she was not at full speed for the latter portion of the race, having hit debris that broke one of her two rudders. Quick work by the crew and the hole in the hull at the rudder bearing was patched, with the team sailing on for an elapsed time win.

This time the only debris hit was a long hawse line from a fishing boat that the crew believe slowed them “for about one and a half – two hours,” Moshayedi said, while they removed it from the keel. All in all, he felt this was a “cleaner” race. Their elapsed time of 6 days 9 hours 8 minutes 26 seconds is the fastest yet for a non-canting Monohull.