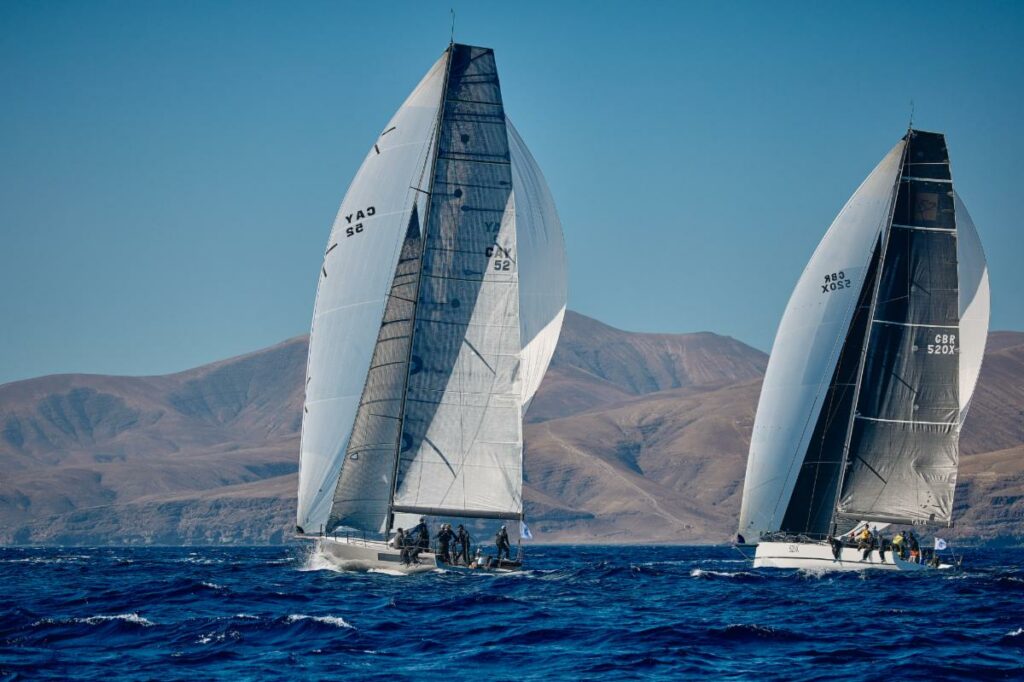 A full-on battle between Caro and Tala has been playing out across the Atlantic over the last 12 days. Pic - James Mitchell/RORC 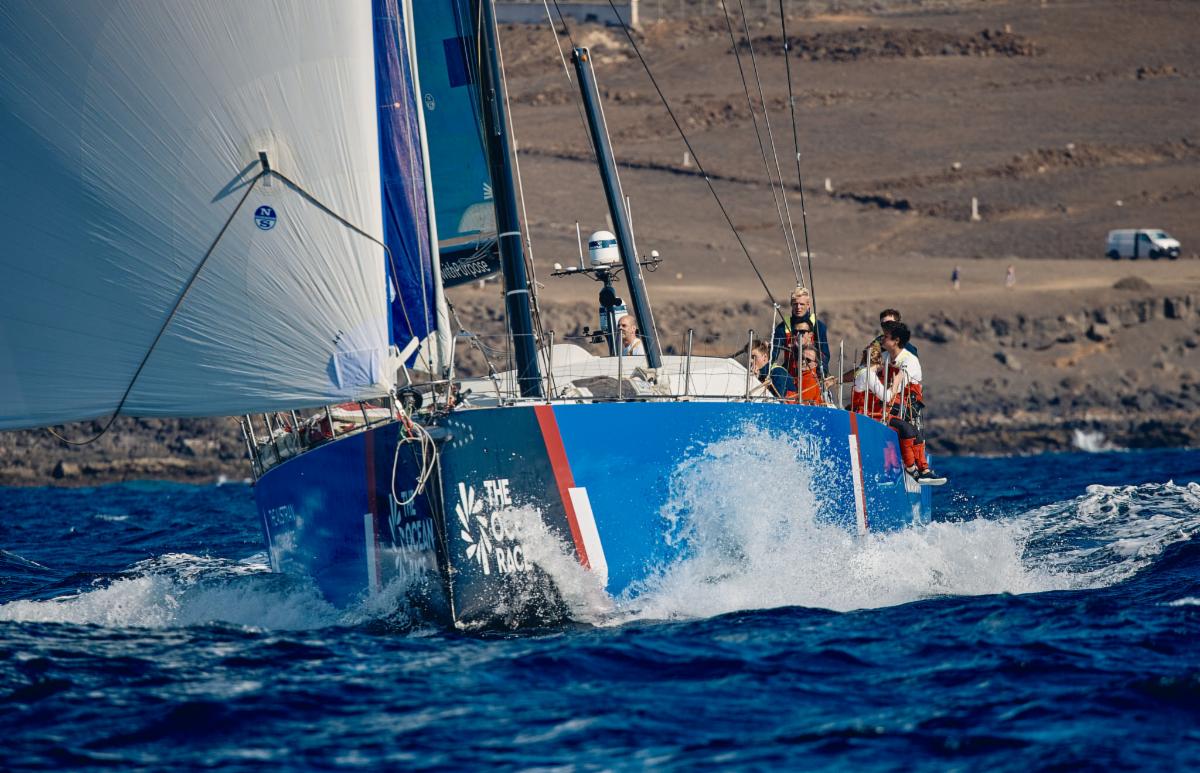 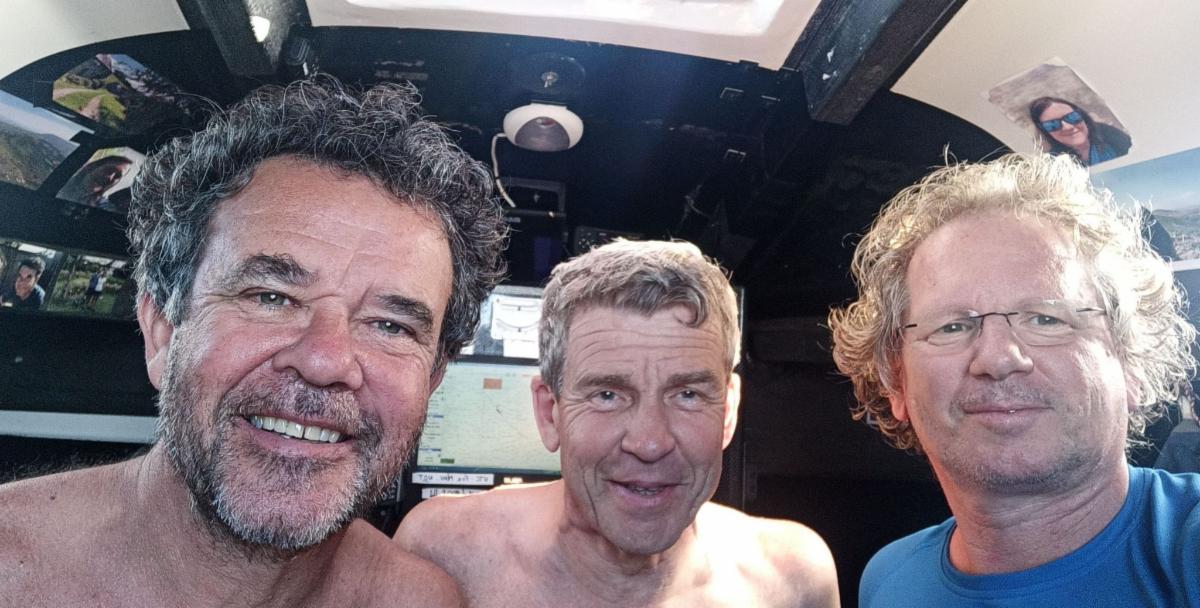 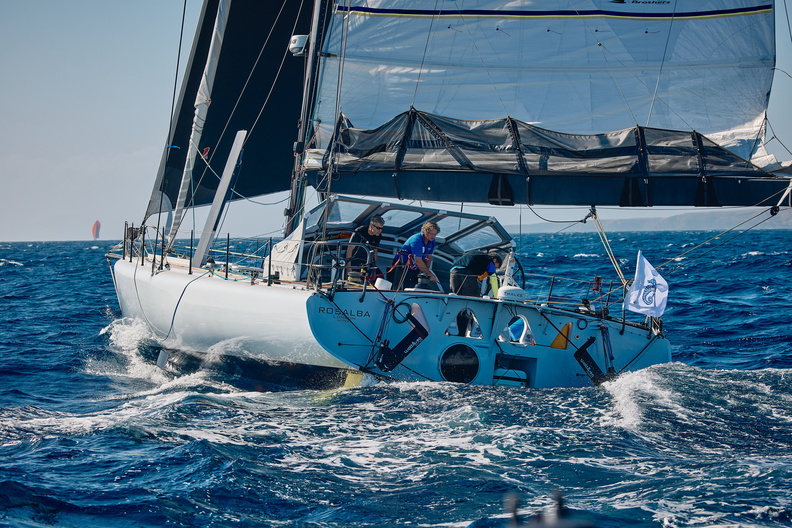 Open 60 Rosalba at the start in Lanzarote. Pic - James Mitchell/RORC 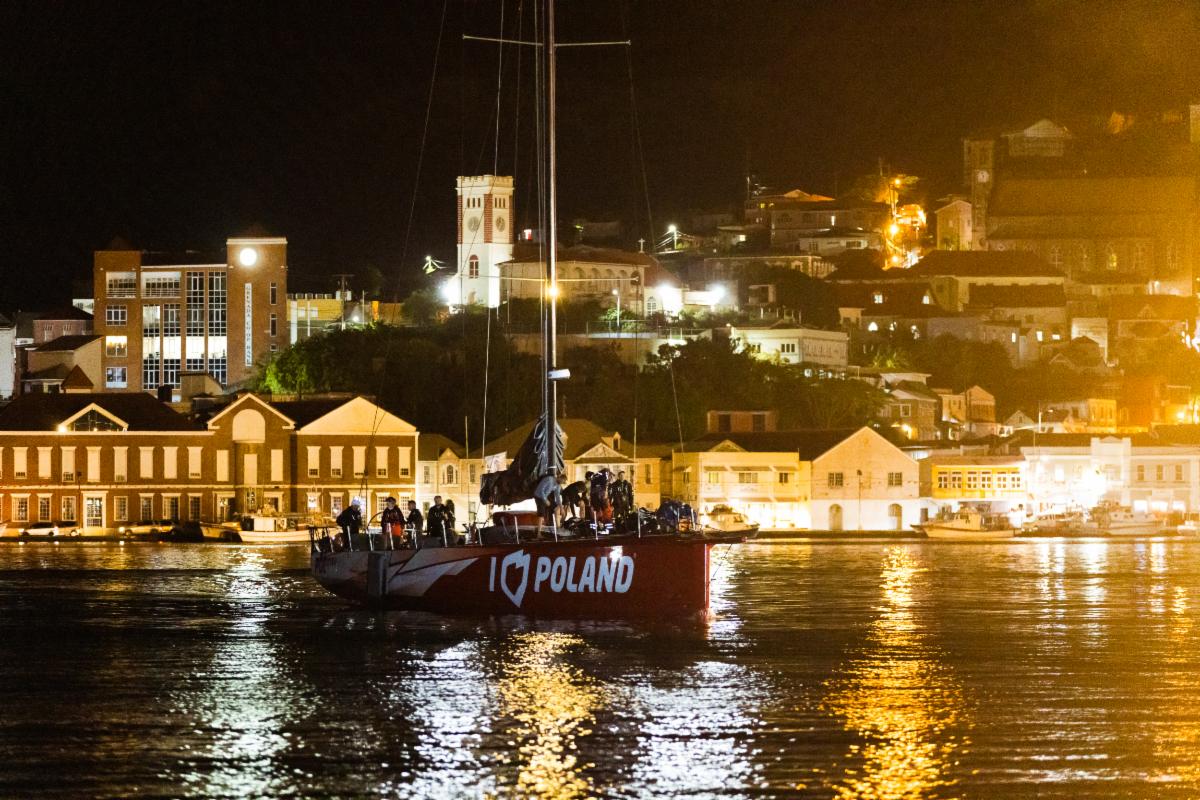 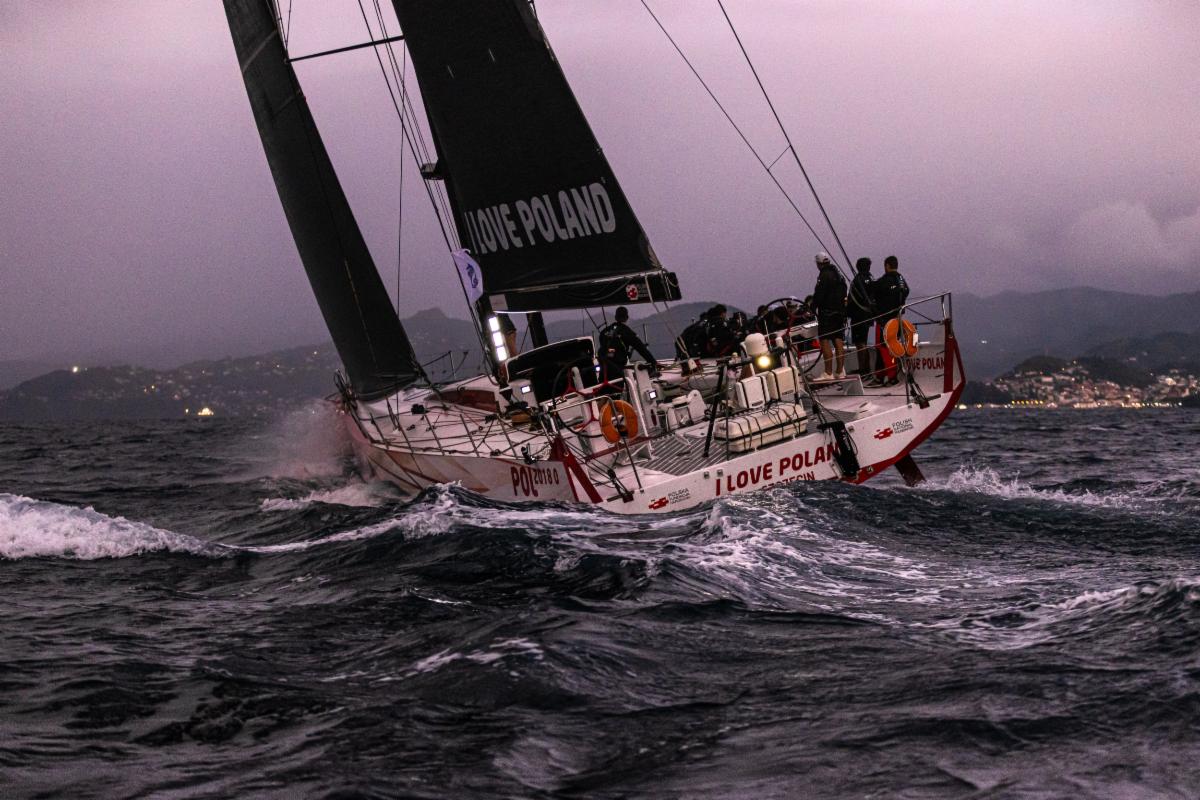 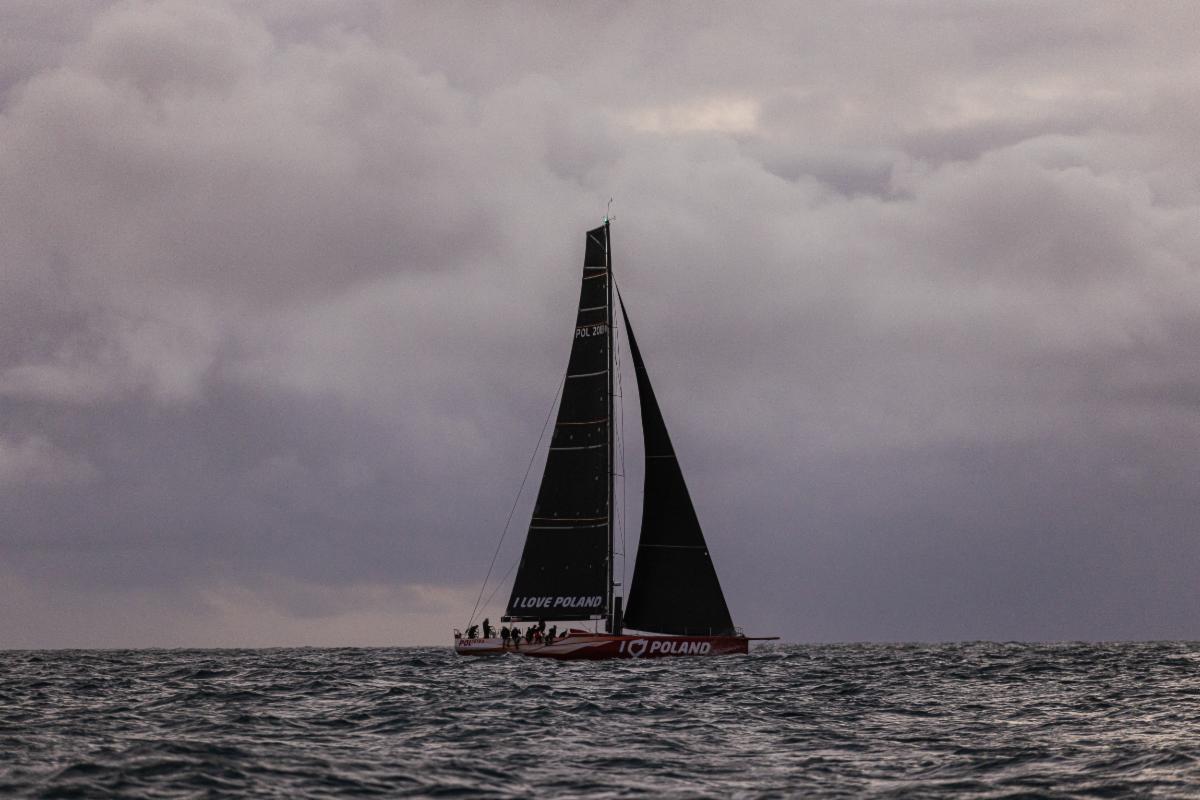 I Love Poland arrives in Grenada for the finish of the RORC Transatlantic Race. Pic - Arthur Daniel/RORC

Volvo 70 I Love Poland is the latest team to finish the race and the third Maxi to do so. The Austrian Ocean Race Project’s VO65 Sisi is expected to finish today (Wednesday). Twenty-one boats are still racing with news in this report from Tonnerre de Glen, Challenge Ocean, Juno and Jangada.

Volvo 70 I Love Poland (POL) finished the RORC Transatlantic Race on January 18 in an elapsed time of 10 days 11 hours 12 minutes and 50 seconds. Skippered by Grzegorz Baranowski, the team is composed of young talented sailors who are all from Poland, with several hoping to take part in The Ocean Race next year. The I Love Poland team enjoyed cold beers courtesy of Camper & Nicholsons Port Louis Marina. Skipper Grzegorz Baranowski spoke dockside:

“I Love Poland is a project to introduce talented young Polish sailors to offshore racing,” commented Baranowski. “The first goal was to finish the race in one piece and we have achieved that. We are happy with our performance and our results will improve with time. For most of the crew this was their first Atlantic race. Poland has a great history in ocean racing and we are trying to get that back. We have a Volvo 65 and we plan to race that around the world, and these guys need the experience and knowledge to do that. For me I am happy to see the emotion and power that this race has given them; they really want to race as a team, that is perfect for me.”

The Austrian Ocean Race Project’s VO65 Sisi (AUT) is another young team with ambitions for The Ocean Race. Skippered by Gerwin Jansen, Sisi is 219 miles from the finish and expected to arrive in Grenada before sunset on January 19.

Volvo 60 Challenge Ocean (FRA) is skippered by Valdo Dhoyer, who sets the scene by satellite link 850 miles from the finish: “The ocean offers us a palette of colours every day that would make Gauguin pale! The heat has settled on board, the 80 per cent humidity sticks to our skin! Shade is a rare commodity and everyone goes on the helm with headgear to protect themselves from (involuntary) attacks by squadrons of flying fish. Everyone marks their time with the immensity of the ocean.”

The full-on battle between Caro and Tala is due to be decided tonight. Max Klink’s Botin 52 Caro (CH) and David Collins’ Botin 52 Tala (GBR) have been in a monumental tussle for 12 days. The downwind sleigh ride is exhausting for both crews, burning out grinders, day after day, night after night. Caro and Tala are both capable of eclipsing Comanche’s corrected time under IRC and topping the overall leaderboard for the RORC Transatlantic Race. Caro and Tala are passing Barbados with about 150 miles to go.

Dominique Tian’s Ker 46 Tonnerre de Glen (FRA) is ranked third in IRC Zero and sent in news about life on board 540 miles from the finish: “Twenty-four hours of pure gliding on the menu for today, with a wind set at 16 to 18 knots, a small well-oriented swell. Everything was there, sun, wind, sea, temperature and not the squalls at 30 knots or flying fish in the face like the night before. The crew and the boat are in great shape. The only downside is a slight shortage of toilet paper… individual distribution was voted as the only viable solution. The stock market value of the sheet is soaring and becoming a bargaining chip!”

Ross Applebey’s Oyster 48 Scarlet Oyster (GBR) is the top ranked boat in class after IRC time correction, but four boats are very much in the running for class victory. On the water, Jacques Pelletier’s Milon 41 L’Ange de Milon (FRA) is just in front of Andrew Hall’s Lombard 46 Pata Negra (GBR). Both teams have about 800 miles to go, doing 10 knots of boat speed pointing straight at Grenada. Two hundred miles behind, Richard Palmer’s JPK 1010 Jangada (GBR), racing two-handed with Jeremy Waitt, is having a stellar race and is ranked second in IRC One and first in IRC Two-Handed.

Jangada published a live satellite interview with fellow Two-Handed campaigner, Shirley Robertson. Richard Palmer commented: “We are enjoying it and into the routine. Rest is a key one, making sure we stay sharp and make all the right decisions. Jeremy and I meet for lunch and that provides a break from the routine. Racing is intense and the lunch gives us an opportunity to take a break and share a few moments.” Robertson suggests that this has been a ‘navigator’s race’.