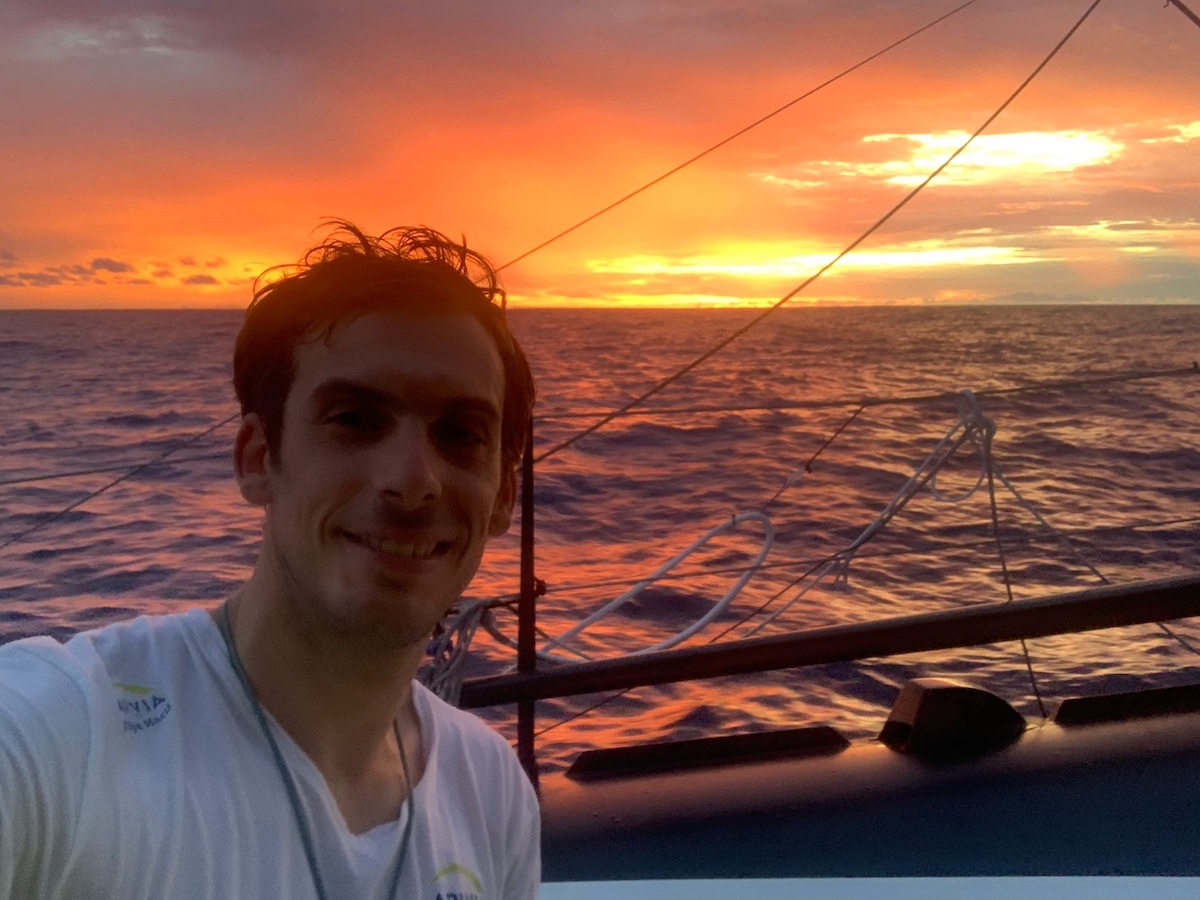 Charal has lost 264 miles in the Doldrums over the last two days to the new leader Apivia, which crossed the Equator at 16:00 UTC  and is speeding towards the finish line in Salvador de Bahia, less than 1,000 miles away. It is likely to go down as the statistic of this 14thedition of the Transat Jacques Vabre Normandie Le Havre – although that figure may still rise.

At the 15:00 UTC ranking, Apivialed by 143.95 miles and were making 14 knots in the unstable south-easterly tradewind. Charal, which had led by 120 miles when they entered the Doldrums at around 07:30 on November 5, was back in second, after briefly slipping to fourth in the morning. But every time they have looked like finally escaping the clutches of the Inter Tropical Convergence Zone, they have been sucked back in. All the boats behind Apiviahad all slipped back into single digit speeds at the 15:00 UTC ranking.

The full analysis of the Doldrums effect is here

America’s Charlie Enright on 11thHour Racingand Britain’s Samantha Davies skippering Initiatives-Cœur– who had jumped to fifth place – are both firmly back in the hunt for a podium place.

“Sorry to not be in touch for the last 2 days. The reason is the Doldrums!” Davies wrote in her atmospheric message to the race office today. “Our passage through this crazy part of the planet has been quite complicated and Paul and I have been 100% to get the maximum out of the boat in these very unstable conditions.

“Basically we have been slaloming through a pack of rather feisty thundersqualls that have thrown us a rapidly varying range of conditions, illustrated perfectly with dramatic cumulonimbus clouds and amazing sunrise and sunsets, and at night by ligtning strikes and flashes all around us.”

For the leading Class40, the Doldrums is already on their minds. By 8° 38 North, Crédit Mutuelhad already slowed down considerably after their record-breaking runs of the last two days.

The first squalls and thunderstorms are heralding a compression of the third of the fleet. Lightning can strike twice and a Charal-like scenario is certainly not impossible.

The compression has begun and at the 15:00 UTC ranking, Britain’s Sam Goodchild on Leyton, had made up almost 30 miles in the last 24 hours and was 52 miles behind Crédit Mutuel. Aïna Enfance & Avenir was a further 24 miles behind in third.

Many of the skippers throughout the IMOCA and Class40 fleet have been talking about how having hourly rankings and position updates means that those behind can hunt those ahead better; learning from their mistakes and taking different angle. The prime evidence for that is Apiviaangling east of where Charalhad stalled.

Ian Lipinski, French skipper of Crédit Mutuel had a different take on it. “It's easier to sail when you're in front, you have more time for manoeuvres, you act without haste,” he said. “We have the time to make the right decisions, we’d have to be like that all the time, but it's easier when we're in front.

“I hope we won’t face the same scenario as Charal, we don’t want that to happen to us tomorrow. This is my first time in the Doldrums, it's going to be fun.”

How fun may become clearer in the next 24 hours.

Groupe GCA – Mille et un sourires should be the first boat to cross the finish in the Bay of All Saints in Salvador de Bahia. They are expected on Friday, November 8 at 04:00 UTC (01:00 local time).

Following the damage to the keel of MACSF (IMOCA), the skippers Isabelle Joschke (Germany) and Morgan Lagravière (France) have been forced to abandon the Transat Jacques Vabre Normandie Le Havre.