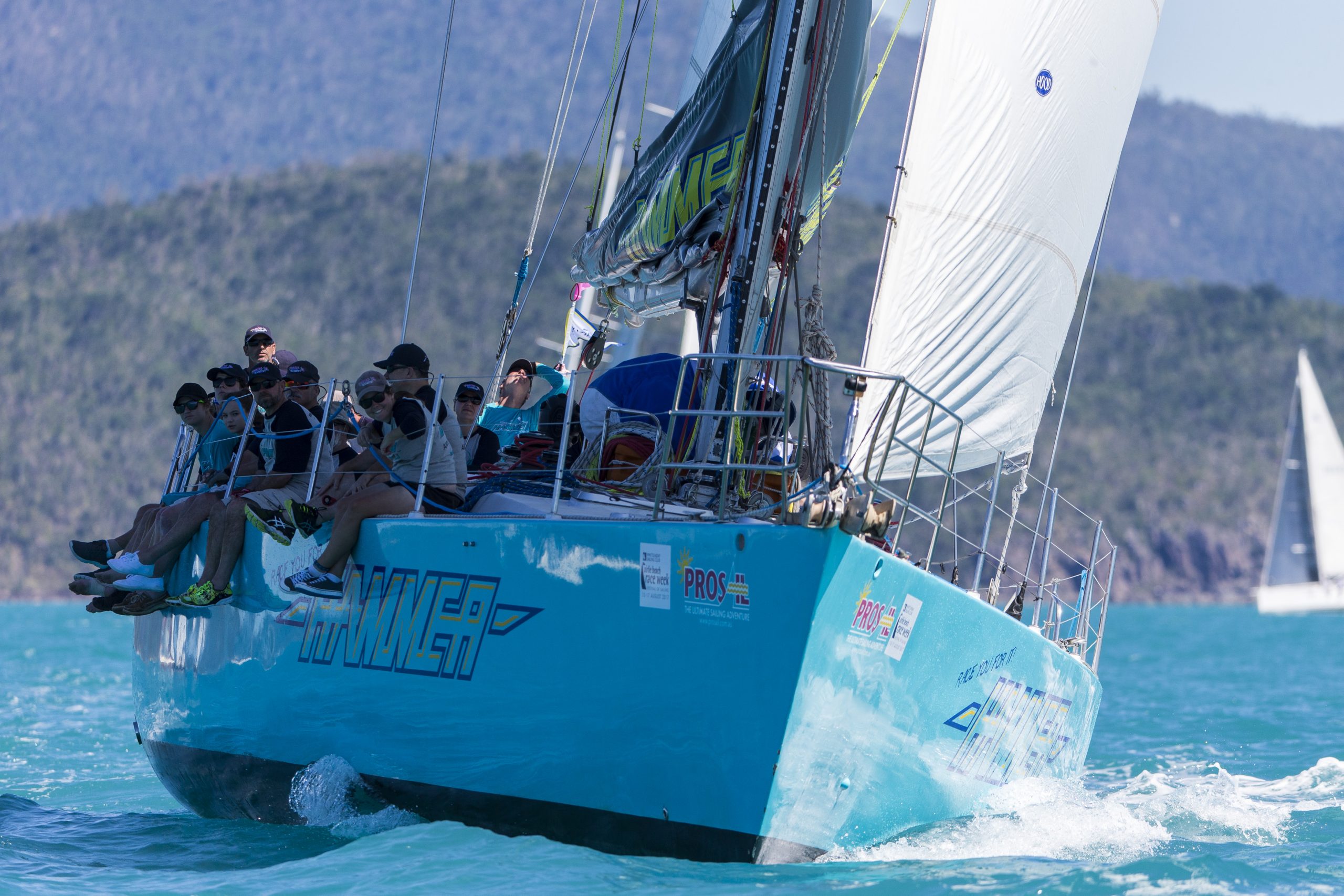 Hammer of Qld crew on the rail - Photo Andrea Francolini/ABRW

It has come to light that there is a bit of a return grudge match going on at Whitsunday Sailing Club’s Airlie Beach Race Week, with a group of experienced skiffies again taking on a boat load of medical students in Cruising Division 1 on two illustrious yachts.

Last year, Hammer of Queensland had it all over Helsal 3, finishing second overall to Helsal’s 16th.

But the tables have turned – this time the 13 Year 5 medical students (all studying from Wagga Wagga Rural Clinic school at the university) on Helsal is leading the pointscore, eight points clear of seventh placed Hammer, a Kel Steinman 76ft pocket maxi.

“Some of these students have had some experience, but majority haven’t,” says regular Helsal crew member Jen Newett who is joined on board by Adam Goode (boat captain), Paul Mara (owner) and Charles Oliver (crew) to help the students for the week.

Barnett responds: “We see them taking their pillows off the boat every day – I suggest they should be handicapped appropriately – or penalised.

He is on the back foot, as the crew tries to defend the reputation of the yacht which in the past has won the Brisbane to Gladstone four times, won Hamilton Island Race Week in 1991 and has a great racing pedigree during the eighties and nineties. Hammer made a return to racing at Airlie Beach Race Week In 2010.

Helsal 3 has scored a run of fourth places – three in a row – while Hammer hasn’t been as consistent, with eighth, ninth and third places. Maybe they are on the way up?

They should be, with the likes of veteran 12ft skiff sailor, Glenn Farquhar an handy bowman and trimmer and others such as Dave Swadling, Jim Beck (18ft skiff champion), James Glassock (12 footers) and Graham Turner (16ft skiff supremo).

In fact this scruffy crew has more than 20 State, National and world titles amongst them – not to mention their mascot, the Bundy bear.

The shame of it all, to return home beaten by the novices.

“We’re lucky to be here at all,” says Cub. “Cyclone Debbie took its toll on Airlie Beach, including on Dave and Ali Molloy’s Prosail. We can’t believe they had a boat repaired and ready for us. Besides, we’d like more breeze please!

Meanwhile, Fisher, a former Sydney Hobart line honours winner with a previous Helsal, and his crew would also like more breeze, but are quietly letting their sailing do the talking, hoping to finish the week where they started – in first place – and ahead of Hammer of Queensland!