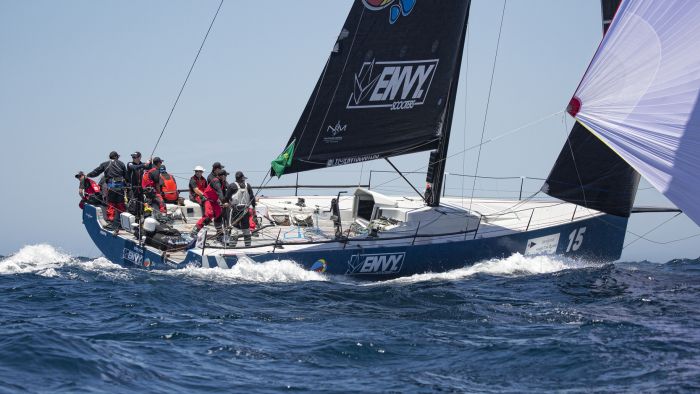 The inaugural Lendlease Brisbane to Hamilton Island Yacht Race is drawing interest from a multitude of boat owners and the TP52 owner group is backing the concept with two entered and more planning to be part of the first ever 530 nautical mile challenge starting at 11am on August 2, 2019 from Morton Bay and finishing off the beautiful Whitsunday island which has a strong tradition of welcoming sailors.

Ichi Ban was dismasted during the recent Brisbane Gladstone Race, but this won’t slow Allen’s campaign of major east coast events down. The offshore rig will be deployed so the team remain on track for the opening event of the northern circuit, the Noakes Sydney Gold Coast Yacht Race starting July 27 from Sydney Harbour.

For the co-owners of the TP52 Gweilo, the distance is attractive given their main goal this year is the Cruising Yacht Club of Australia’s Bluewater Series, including the 75th Hobart race. “Last year we did the Brisbane to Keppel and now we have the option of the longer race, hopefully with a good fleet of TP52s making it even more exciting,” Donald said. “We began our 2018 season in April-May, so nine months capped off with the Hobart race. A year on and we’ve cemented the majority of the crew plus added Wade Morgan as skipper and Billy Merrington as tactician, which holds us in better stead to be more competitive.”

Distance-wise, the Royal Queensland Yacht Squadron’s latest initiative is the second longest Australian bluewater race behind the Rolex Sydney Hobart at 628 nautical miles. So far the entry list represents three states – NSW, Victoria and Queensland – plus overseas. And unless another big multihull appears out of Asia, Karl Kwok’s MOD70 Beau Geste (HKG) will be unmatched when the time comes to set the multihull record for the debut bluewater event.

Bolstering the Moreton Bay start line on August 2 will be crews contesting the 13th Club Marine Brisbane to Keppel Yacht Race, but that’s where the two fleets separate out. “Theoretically those crews taking on the Lendlease Brisbane to Hamilton Island Yacht Race could first record a finish time for the Keppel Race, but they would be taken off course and disadvantaged by sailing an additional 50 or so nautical miles,” said RQYS race director Brady Lowe.

RQYS, the organising club of both races, sees the two events comfortably coexisting as owners enjoy being part of the spectacle of a combined start then opt for the shorter close-to-shore Category 2 race or the new 530 nautical mile Category 2 race with AS Special Regulations Part 1, which feeds into Hamilton Island Race Week, August 17 – 24.

Sticking with the traditional Queensland coastal race route north from Moreton Bay to Breaksea Spit, the Lendlease fleet will face the navigational challenge of the Great Barrier Reef’s southern outcrops and the beautiful and rugged islands that mark the approach to Dent Passage, and the finish line off Hamilton Island Yacht Club.

Early bird entry for the Lendlease Brisbane to Hamilton Island Yacht Race closes May 31 and the standard entry fee will apply until 1700hrs on July 19. Thereafter a late fee may apply. The Notice of Race is available here